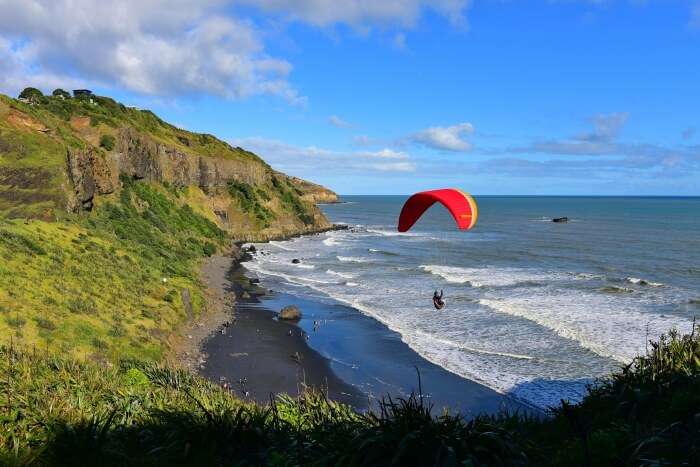 Auckland is more than just another major city in New Zealand. This city is for every kind of tourist. The Instagram people will find sumptuous dishes in the various cafes in Auckland. The nature lovers will find numerous chances to see wildlife up close. The romantic ones can take a stroll down the beautiful roads and beaches. The adventurous ones can go for paragliding in Auckland for the most beautiful view while flying over the city. There are various types of paragliding sites in Auckland so that the more adventurous ones can pick the more challenging sites and the beginners can go for something that looks less daring.

8 Places For Paragliding In Auckland

The paragliding club Auckland has about 40 sites for paragliding. There is nothing to worry about as long as you follow the instructions sincerely. You need to enjoy the thrill of paragliding without worrying for your life. Auckland city will arrange that for you. Let’s check out some places you get to explore while paragliding in Auckland.

Starting with the best site for beginners, this site is a well-known training site. You get to glide over a view of 30km of beach and the view of the vast sea. You get there are 11 in the morning on a good weather day and the team will take care of everything else. You will have to carry your own lunch and beach supplies because there is no arrangement for that near the beach. Also, you need to get in touch with the team when you leave your hotel because you might experience some network coverage issues by the time you have reached the spot.

Image Source
This site is for those who want to take their romantic walks to the next level. The view of the West Coast is amazing even when you walk by the streets of Auckland. It is 100 times more exciting when you glide over the area. The usual meeting point for this site is the Sandunz Café which is very close to the car parking area. So you will have no trouble finding a parking spot for your rental, or some refreshments right after you are done gliding.

Suggested Read: 8 Best Places For Snorkeling In Auckland That’ll Pamper The Swimmer In You

Image Source
This place is also called the North Head because of the volcanic headland there. This is an unusual site for paragliding in Auckland because of the volcanic site. This is a great option because you get to see the Cheltenham Beach, the Hauraki Gulf, Devonport, and the Waitemata Harbor, all in one single view. The islands around make the place even more beautiful. You cannot get enough of the bird’s eye view for this place.

Image Source
This thermal site has a paragliding site that usually takes you towards Warkworth. Flying in the direction of Matakana, Mangawhai, and Waipu is exciting because that is the closest you get to the restricted airspace. This site in New Zealand is not for beginners though, the flying can get a little tough. This is a popular site for tandem paragliding in Auckland. You can take a local pilot to navigate you safely and also to act as your personal airspace tour guide.

Image Source
If you want to take off from the East Coast, this is the site you are looking for. The Mangawhai Heads is one of the best options for paragliding sites in Auckland because you might witness the stunning marine life right below you. Dolphins, whales, or sharks could be swimming right with you, while you are gliding in air, and they in the ocean below. There is a good open grassy spot north of the busy beach for you to land. The launch area is steep but once you are in the air, you will get to see the Whangarei Harbor, the Lengs Beach, and the marine creatures if you are lucky.

Image Source
If you are not feeling up for the steep, difficult launch area, this is a good option for you. A safe, grassy patch is ideal for both, safe launches and safe landing. The area is huge so you will feel safe all along. This is one of those paragliding sites in Auckland that the locals would recommend to beginners. You still get a good view of the Kaipara Harbor and the downtown East Coast. The site is beautiful even if it is not very challenging. Remember, this site is closed during spring because there are farms all over underneath and nobody wants to interrupt lambing season.

Image Source
Bored with too much safety? The Paeroa Range will offer a 10km stretch of takeoff area after which you are free to go in any direction you want. The wind is light in this area so you get to navigate yourself in any direction you want. You will see farms beneath you and that is where you land. Be careful though, a major part of the land you will be on is private land, so you need to know the site protocol before you go up in the air.

Image Source
​Do not miss Queenstown on your New Zealand visit. Auckland is great but less than 2000km away you will find the Adventure Capital of New Zealand. You can take a flight from Auckland and get to Queensland in less than two hours, or you can take the SH1 if you like long journeys by road. Once you get to Queensland you get the chance to take off from the Gondola on Bob’s Peak, or from Coronet Peak. Fly over the Lake Wakatipu and you will realize that some of the best paragliding sites in Auckland are a little further away. Nelson and Christchurch are also good places to base your paragliding trips from.

Tongaporutu, Taupo, the Kohe Point, and Ohiwa are some more sites close to Auckland which are just as good for paragliding. Paragliding in Auckland has endless possibilities. You can go on your own, or for tandem paragliding with a pilot guide. You can take off right from an Auckland site or from a nearby point and glide over Auckland. You can explore the cities around if you go to New Zealand or other areas. The possibilities are never-ending.

Q. What are some of the most famous paragliding spots in Auckland?

A. You could go paragliding in Auckland including Kariotahi beach, Muriwai beach, Maungauika, Moir’s hill, Mangawhai heads, Dills hill and many more.

Q. Why is Karioitahi beach in Auckland so famous among adventure-seekers?

A. Karioitahi beach is quite popular among tourists who love adventure sports because the spot is famous for paragliding. Not only experts, but you could go paragliding even if you are a beginner. You would be amazed to experience a fantastic view as well as the weather of the beach.

Q. Where does the paragliding trip start at Muriwai beach in Auckland?

A. The paragliding trip in Muriwai beach starts at the Sandunz café that is located quite close to the parking area of the café. You will be able to identify the city quite easily.

Q. Why is Maungauika so popular in Auckland?

A. Maungauika is a location in Auckland that allows you to go paragliding amid the exotic beauty of the mountains and seas of New Zealand. You will be able to enjoy the trip, even more, when you are flying at a height of 3500 feet while paragliding.

Q. Can a beginner go paragliding in Moirs Hills?

A. No, Moirs Hills is not suitable for beginners for paragliding because you would be able to fly in restricted airspace.

Q. What are the sites that you could see while paragliding in Mangawhai heads?

A. Paragliding in Mangawhai heads will allow you to view amazing locations including Whangarei Harbour, Lungs Beach and many more.

Q. What are the famous tourist spots in Auckland?

A. There are several spots in Auckland that are incredibly famous among tourists, including Cornwall Park, Parry Kauri Park, Auckland Art Gallery, The Winter garden and many more.

Q. When is the best time to visit Auckland?

A. The best time to visit Auckland is between March to May.

6 Water Parks In New Zealand For An Exhilarating 2021 Retreat