Paragliding In Naukuchiatal: Experience The Real Adventure Amidst The Hills In 2020 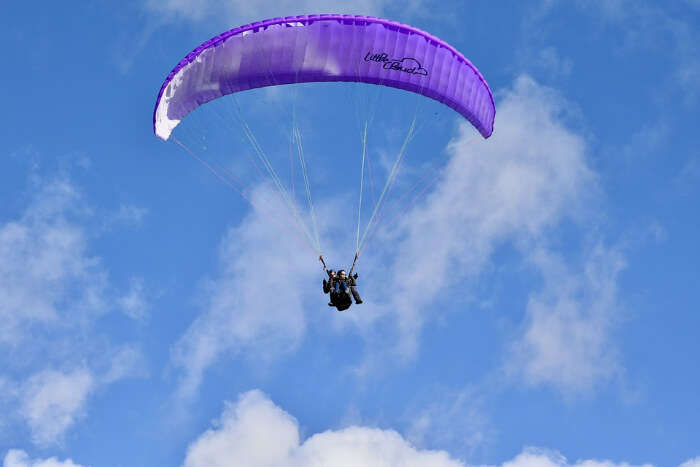 Located in the heart of Uttarakhand, Naukuchiatal is a magical hill station which is much famed for its lakes and surrounding water bodies. Literally translating into the “Lake of nine corners”, this picturesque hill station also offers tremendous opportunities to experience the best of paragliding in Naukuchiatal. Leaving you with fresh feels of the snow-clad mountains and the positive vibes, keep this guide handy as you gear up to glide amidst the mesmerizing hills of Uttarakhand.

Must Read: 6 National Parks In Uttarakhand That Would Please Your Eyes & Calm Your Adventurous Side

Summers: Starts from March to June – Average temperature ranges from 11°C to 30°C

Monsoon: Starts from July to August – Average temperature ranges from 16°C to 25°C

Winters: Starts from September to February – Average temperature ranges from -2°C to 14°C

Suggested Read: 10 Things To Do In Uttarakhand For Adrenaline Rush & Soul-Stirring Thrills In 2020!

Best Time For Paragliding In Naukuchiatal

Cost Of Paragliding In Naukuchiatal

Owing to the obvious reasons, location, and naturally associated risks, the paragliding in Naukuchiatal price falls under the higher bracket. Mainly, there are two types of paragliding which are popularly known as short fly, and high fly. Here are the Naukuchiatal paragliding rates:

Other than that, below mentioned are few other factors that are a must to be considered while arriving at an estimated budget for traveling to Naukuchiatal.

Average Budget Per Person For Paragliding In Naukuchiatal: INR 6,000

Suggested Read: 15 Amazing Hill Stations In Uttarakhand: From The Most Popular Hill Towns To The Unexplored Ones

Places To Visit In Naukuchiatal

Here are some of the best places to visit in Naukuchiatal on your Uttarakhand holiday:

Much famed for its lake that covers the nine corners of the hill station, Naukuchiatal Lake is a lesser known gem in the heart of Uttarakhand which has off-lately gained much popularity due to the thrilling activity of paragliding. Adding the much needed grace to the charm of the hill station, the Naukuchiatal Lake is one of the deepest lakes in the district of Nainital.

A strong and gushing network of seven lakes of freshwater, the Sat Tal Lake is a beautiful waterbody which nourishes the Kumaon region of Uttarakhand. Offering mesmerizing views of the pine and oak forests that surround the lake, Sat Tal is considered to be one of the cleanest lakes in Nainital which also serves as a great spot for adventure activities.

Much famed for offering the best sites to the travelers for birdwatching, Bhimtal is one of the largest perennial lakes in the whole of Nainital. Serving as a home to the famous trans-Himalayan birds, Bhimtal is a must-visit lake for all the travelers when in Uttarakhand for enjoy paragliding in Naukuchiatal.

Other Things To Do In Naukuchiatal

Here are some of the other exciting things that you must experience in Naukuchiatal:

Boating is one activity which can be enjoyed on all the lakes of Nainital district. From Bhimtal to Sat Tal and Naukuchiatal, relish the panoramic views of Uttarakhand’s mountainous landscapes.

Taking the travelers through the dense pine and oak forests, the massive mountains and rugged terrains of Uttarakhand offer famous and marked trails to the travelers to enjoy the best of trekking in Naukuchiatal.

Suggested Read: The Ultimate List of Adventure Holidays In India For Summer 2019

Be it Naukuchiatal or the famous Bara Pathar located in Bhimtal, it is a must for all the travelers to enjoy horse riding at these popular locations. While the experienced riders can go for a ride through the lush forests, amateur riders can also experience the same with experienced horsemen.

Suggested Read: 10 Best Places To Visit In Uttarakhand In December 2019 For A Refreshing Escape

Tips For Paragliding In Naukuchiatal

Suggested Read: 7 Honeymoon Places In Uttarakhand For An Idyllic Escape Right After The Wedding

How To Reach Naukuchiatal

You can reach the hill station of Naukuchiatal by air, by train, and by road as well. Located at a distance of about 53 kilometers, the Pant Nagar airport is the closest airstrip to Naukuchiatal whereas the railhead of Kathgodam is the nearest railway station at a distance of 7 kilometers only. For those who’re keen on traveling to this paradise by road, can do so from the following cities and towns that are located nearby.

Distance From Delhi To Naukuchiatal

Mesmerized much? Then what’s stopping you? Get going by customizing one of the best Uttarakhand tour packages with TravelTriangle, and soar high in the sky as you relish the panoramic views of nature while paragliding in Naukuchiatal.

Q. Is paragliding in Naukuchiatal safe?

A. Yes, the paragliding activities in Naukuchiatal are hosted out in an organized way. Safety instructions are strictly followed and the activity is carried out in the supervision of trained instructors.

Q. Can you paraglide in the rain in Naukuchiatal?

A. Paragliding anywhere in rain is risky. Take off and landing would be difficult as the ground surface becomes slippery. Also, rain may hinder your visibility.

Q. What is the best time to paraglide in Naukuchiatal?

A. Weather is pleasant and favorable for flying from April to June and September to November. You view the most scenic spots in the mountains, valleys, and lakes at this hill station.

Q. How much does paragliding cost in Naukuchiatal?

A. This is one of the most affordable places to paraglide in India. It is only 20 kilometers from Nainital and is known for its scenic beauty and nine scenic lakes.

Q. What is the duration of a high flight in Naukuchiatal?

A. The best clothes you can wear flying in this hill station is a wind jacket, sunglasses, heavy woolen clothes, and comfortable socks and shoes. Do not wear layered clothes, jeans, and regular innerwear. Wear a thermal innerwear and prefer wearing stretch clothes such as track pants, or anything comfortable that is not too thick.

Q. How high can you fly in Naukuchiatal?

A. You can fly as high as 3000 feet for a time of 20 to 30 minutes. You can as well fly in winter at this hill station. Just ensure you are wearing the right clothes that protect you and make you sit comfortably throughout the flight.

Q. What is the weight limitation to fly in Naukuchiatal?

Mountaineering In China: 5 Best Places To Spruce Up Your Adrenaline