5 Places Near Daria Daulat Bagh To Gratify Yourself With Its Hidden Stories! 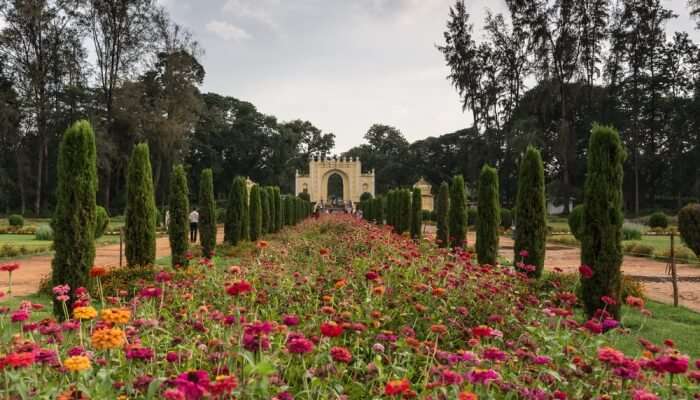 Mysore is one of the famous tourist places in India that every person across the country wants to visit. The country offers a lot of amazing places. Amongst all the popular places, Daria Daulat Bagh is one place you must visit as it depicts the history of the war between the Britishers and Tipu Sultan and will take you closer to the culture of the city. You can also enjoy the view of this splendid architectural building. There are many places near Daria Daulat Bagh that you can visit for an extraordinary experience.

Daria Daulat Bagh, also known as Garden of Wealth, is one of the famous historical monuments located in Srirangapatna near Mysore. The palace was built in 1784 by the Tiger of Mysore, Tipu Sultan in an Indo-Saracenic style architecture and mostly is made of teakwood. The most fabulous part of the palace is that the walls, canopies, pillars, and arches are done with colorful frescoes in a style of Mysore paintings. Daria Daulat bagh is one of the tourist places that is never overlooked by any person visiting Mysore. The palace is known for its architecture and beautiful surroundings. Here are some interesting facts about the place. Have a look!

1. Hyder Ali started the construction of the palace in 1778 and his son Tipu Sultan completed the work in 1784.

2. It is now converted into a memorial museum of Tipu Sultan. The first floor houses the paintings, sketches, and drawings along with block prints and Tipu Sultan’s clothes.

3. The walls and pillars of the palace consist of paintings of the warfare by Hyder Ali, Tipu Sultan, the Nizam of Hyderabad, Britishers and French people.

4. The museum has the famous oil painting ‘Storming of Srirangapattanam’ by Sir Robert Ker Porter made in 1800.

Timings of Museum: 9am-5pm
Entry fees: Rs 15 for Indians and Rs 200 for Foreigners

Although Daria Daulat Bagh can be visited at any time of the year, the best time to visit this place is between the months of November and April. As Karnataka is a coastal region, the weather remains hot and humid. In winter, the temperature dips down and the weather becomes pleasant.

The city of Srirangapatna has been known for its historicity across the country. It is a hub for people who are in love with history and culture. Scroll down to view some of the famous places to visit near Daulat Daria Bagh.

Located in the historical capital of Karnataka, Srirangapatna Fort is one of the well-known monuments in the city. The fort was built by Timmana Nayaka, a ruler of Vijayanagar Empire in 1454. Later, the kingdom became a military force under the control of Hyder Ali.

Also known as Masjid-e-Ala, Juma Masjid is situated near the Bangalore Gate of Srirangapatna Fort. It was built by Tipu Sultan in 1784 and offers a view from two octagonal minarets standing on a high platform with an open court in the front. 99 names of Allah are inscribed on the walls of the prayer room and all the walls and ceilings of the masjid are designed with Persian inscriptions.

Designed in an Islamic style with a rectangular beauteous garden leading the path for the mausoleum, Gumbaz is one of the top attractions in the city. It is a mausoleum of Tipu Sultan, his father Hyder Ali and mother Fakhr-Un-Nisa. The structure stands on an elevated platform, consists of a dome placed in a cubical structure with ornamental railings and turrets.

Suggested Read: 14 Itineraries Including Best Honeymoon Places In & Around Karnataka

Sri Ranganathaswamy Temple, situated in Srirangapatna, is one of the most famous and important temples of the state. The temple is protected by the archaeological survey of India as a monument of national importance. The structure of the temple is beautifully crafted with a blend of Hoysala and Vijayanagara architecture.

Also famous as Pakshi Kashi of Karnataka, Ranganathittu Bird Sanctuary is located in the Mandya District of Karnataka. It is the biggest sanctuary of birds in the state which is sprawled in the area of 40 acres. Moreover, it consists of six islets on the Kaveri River bank.

How To Reach Daria Daulat Bagh

Mysore is connected to all the cities of the state. So you can take a train from Mysore railway station or take a flight to Mysore airport.

Ranganathittu is a small bird sanctuary and also one of the famous tourist attractions in the city of Srirangapatna. The sanctuary is a home for wide species of birds and a paradise for bird watchers. All animal lovers must visit this place.

Further Read: 20 Fascinating Temples In Karnataka That Are All About Architectural Grandeur!

Enjoy your trip to Mysore which has a cool atmosphere and explore the hidden stories of the place with a wandering educator. So what are you waiting for? Pack your bags and get ready for the next tour to Karnataka with TravelTriangle. Do not forget to buy souvenirs and click pictures.