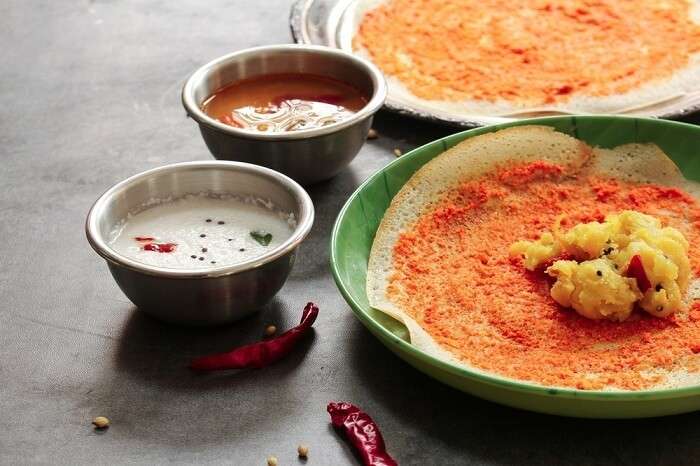 Masala Dosa is the first thing that pops into your head when it comes to Karnataka Cuisine. What you don’t know is that Karnataka cuisine, one of the oldest surviving cuisines, is well known for its spicy curries and seafood specialities. Rich and delicious, it has drawn an influence from the neighbouring states and coastal areas.

The taste and variety of Karnataka dishes change as you move from region to region. While North Karnataka food is mainly about vegetarian food, the coastal region serves you lip-smacking seafood. Kodagu region is where you will taste the best meat curries and Mangalorean Cuisine has a rich flavour of coconut and local spices.

Here are top 15 dishes from Karnataka Cuisine you must absolutely have for an amazing gastronomic experience.

Starting from the famous Mysore Masala Dosa, it is a staple food of Karnataka. The reason Mysore Masala Dosa tastes different than the other dosas is the special red spice mix smeared on the inside of the Dosa. The flavour of the red spice mix and the crispiness of Dosa will make you wanting for more. The dosa is best enjoyed with coconut chutney, sambar, and lots of ghee.

Best place to have: Mavalli Tiffin Room in Indiranagar, Vinayaka Mylari in Mysore

If you haven’t heard about this famous sweet, have you even been living in this world? Mysore Pak is a Karnataka sweet made with a concoction of ghee, sugar, and gram flour. It was first created in the kitchens of Mysore Palace during the regime of Raja Wadiyar IV and now has become people’s favourite dessert. If you find yourself in Mysore, stop at one of its sweet shops and bring yourself a box of famous Mysore Pak. It is an iconic item of Karnataka Cuisine.

Best place to have: Vaishnavi Sweets in Mysore

Suggested Read: Shopping In Mysore: Top 10 Things To Buy And Where To Shop For Them

For those who like to eat spicy and sweet at the same time, Chow chow Bath is just the Karnataka food for you. It is a two-in-one dish; Khara Bath and Kesari Bath. While Khara Bath is the spicy Upma made with peanuts and vegetable, Kesari Bath is sweet Halwa which gets its orange colour from saffron. Both these delectable dishes are made with semolina (sooji). It is Karnataka’s favourite breakfast meal.

Ragi Mudde is a part of the Karnataka cuisine in rural areas and is made with Ragi flour and water. The dough is rolled into balls and is eaten with Sopinna Saru which is simply a gravy made with green leafy vegetables and lentils cooked with spices. The consistency of Saru makes it easier to swallow Mudde. This Karnataka recipe is very high on the nutritional value and has amazing health benefits.

Suggested Read: 12 Hill Stations In Karnataka In 2019 To Rejuvenate Yourself

Korri Gassi is a lip-smacking chicken curry which comes from the coastal region of Karnataka. In Tulu language, chicken is called ‘korri’ and the curry is called ‘gassi’. The curry is infused with the flavours of coconut and tamarind which are the main ingredients of this dish. It is served along with Neer Dosa. The aroma and flavours of this chicken curry describe Karnataka Cuisine scene at its best.

Best place to have: Sea Rock in Seshadripuram, Coastal Mama in JP Nagar

Suggested Read: 12 Stunning Places To Visit In Summer In Karnataka For A Relaxing Retreat In 2019

What is popularly known as Puran Poli in Maharashtra, Obbattu or holige in Karnataka is a one of the most favourite and important dish in the Mangalorean Cuisine. Obbattu is a sweet Indian flatbread made of lentils and jaggery. The mixture of lentils, jaggery, and coconut is covered with flour dough and rolled into a sweet parantha. It is an integral part of all the festivals and traditions.

Best place to have: The Green Path in Malleshwaram, Mane Holige in Jayanagar

How can Mangalorean Cuisine be complete without a coastal fish curry? This authentic dish of Karnataka is made with Lady fish dipped in fiery red chilli paste batter which is then coated with semolina and fired till it is golden and crisp. The fish is crispy on the outside and tender and juicy inside. This coastal delicacy is favorite among the fish-eating community.

Best place to have: Sea Rock in Seshadripuram, Maravanthe in Indiranagar

Suggested Read: 15 Places To Visit In Dandeli In 2019 For Unforgettable Adventure

Bisi Bele Bhath is such a popular south-Indian meal that you will find in every Karnataka restaurant. The wholesome meal is made with rice, lentils, and vegetables cooked together with tamarind paste and dry coconut. The south-Indian version of ‘Indian Khichdi’ is served along with papadum and buttermilk. Bisi Bele Bath is the perfect dish for the days when you want something simple yet flavorful. It is a staple food of Karnataka.

Best place to have: Mavalli Tiffin Room in Indiranagar

A very popular tea time snack, it becomes difficult to stop once you start munching these fritters. This Karnataka cuisine recipe derives its name from Maddur town in Mandya, Karnataka. Unlike regular Vada which looks like a donut, Maddur Vada is made with maida, semolina, and few spices. You will find this famous fritter snack served in trains and tea-stalls. This Karnataka food item is best enjoyed with coconut chutney and filter coffee.

Best place to have: Maddur Tiffany’s in Mandya, Go Native in Bangalore

Image Source
A non-vegetarian delicacy hailing from the land of Coorg, Pandi Curry is made everytime there is a reason for celebration. Traditionally, the dish was made with wild boar and vinegar made out from wild black fruit, but the contemporary version uses pork meat and special ‘Coorg Vinegar’ which imparts a distinct sour flavour. The rich dark colour to the gravy is imparted by freshly ground spice blend. The curry is best enjoyed with rice roti or rice balls.

Best place to have: Coorg Cuisine in Madikeri, The Coorg Food Co. in Bangalore

Suggested Read: 10 Best Things To Do In Coorg For A Refreshing Escape From Urban Life

One of the popular Udupi dishes you will find on the menu is Dahi Bada or Thayir Vadai. This recipe is somewhat different than the north Indian version of Dahi Bhalla which is a melange of tangy flavours. The dish is prepared on all eves and festivities in South India and also a popular breakfast meal. If you are visiting a traditional South Indian restaurant, start your meal with this simple yet delectable dish.

The Indian coffee is made with boiling frothy milk mixed with a decoction of ground coffee beans brewed in a traditional filter. The right way to drink filter coffee is slurping it from the small saucer they serve it with. The rich aroma of the coffee will take you straight to the coffee plantations. Filter kaapi is a signature beverage and cultural icon all across Karnataka and other coastal regions.

Best place to have: Shri Sagar and Indian Coffee House in Bangalore

Puli Kodel is yet another Mangalorean delicacy made from okra cooked in freshly made coconut masala. The dish will win over your senses with rich aroma and flavour of south-indian spices. While okra gives it a crunchy texture, jaggery and tamarind in the coconut mixture make it sweet, spicy, and tart all at the same time. This Karnataka special food is made with no onion or garlic and is best enjoyed with steamed rice.

Best place to have: Oota in Bangalore

Suggested Read: 10 Homestays In Coorg That Will Bring You The Exact Feel Of A Sweet Home

All south Indians start their meal with a tangy appetizer called Rasam. Udupi Rasam is made with tomato and tamarind water tempered with spices which results into a tasteful concoction. A Kannada Brahmin recipe, it is served before meals or with South Indian Thali. It is literally a blast of flavours in your mouth and you won’t be able to stop at just one glass.

Best place to have: Prems Graama Bhojanam in Bangalore, Machali in Mangalore

Literally translating to ‘Water Dosa’ in Tulu Language, Neer Dosa a fluffy laced crepes made with rice batter. The difference between a regular dosa and Neer dosa is that its batter is not fermented. An important part of Mangalorean cuisine, it is a great accompaniment with curry dishes like kurma and saggu.

Best place to have: Oota in Bangalore

Told ya! There is more to Karnataka cuisine than just Masala Dosa. The best part is they have a variety of dishes for both vegetarians and non-vegetarians. So you won’t have to order the same thing everytime. Choose your honeymoon or family getaways from customized Karnataka Packages with TravelTriangle.

40 Indian Snacks Which Can Turn You Into a Local From a Tourist In 2020!

5 Hotels Near Madikeri You Should Consider Staying At