10 Temples In Karnataka That Are All About Grandeur That You Must Visit In 2020! 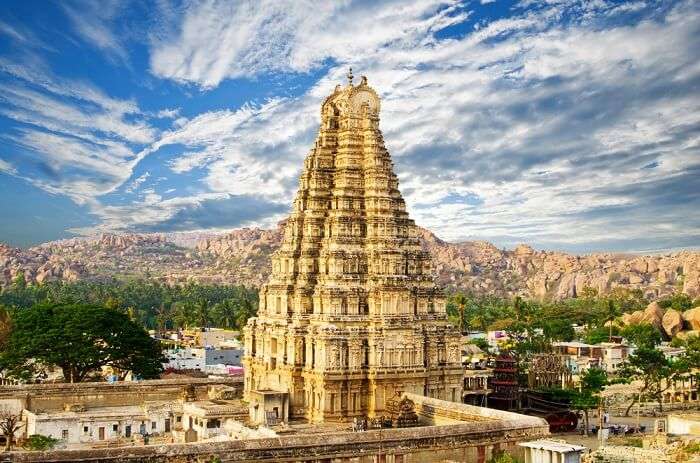 South India is known for being home to majority of the temples in the country. Having said that, Karnataka is one destination wherein there’s never a dull moment when it comes to touring the temples. Known for its unique architecture from the time of Hoysala Empire, these eight fascinating temples in Karnataka showcase the ageless beauty along with a unique architectural style. Take a look!

Here are some of the most famous temples of Karnataka that you cannot miss out on your next trip to the beautiful state. If you are confused, this might help!

Much famed as the Cradle of Temple Architecture, the village of Aihole boasts of about 125 temples in and around the village. Every Karnataka temple tour will take you to Aihole and the most famous temple in the village is that of the Durga Gudi temple. Built in 7th Century AD, the temple boasts of beautiful rock cut architecture and is built in an apsidal and oblong shape that sets it apart from all other temples in Karnataka.

Must Read: 11 Things To Do In Murudeshwar For A Relaxing Holiday In Shiva’s Coastal Abode In 2020!

Built in 1268 AD and located in Somnathpur of Mysore, the Keshava temple is one the most popular temples in Karnataka. It is one of the best preserved temples of Hoysala empire that is entirely covered with sculptures. The unique feature of this temple is the three-star shaped sanctuaries designed with intricate sculptures. Located at a distance of just 40 kms, this temple can be easily reached from the Mysore Airport.

The town of Murudeshwar consists of one of the best Shiva temple in Karnataka that is located in the Bhatkal district. It is much famed as the world’s second largest statue of Lord Shiva while the temple also offers breathtaking views of the Arabian Sea. To reach this temple, one can either board a train that travels on the Mangalore-Mumbai-Konkan rail route or board a bus to Murudeshwar temple from Bangalore.

Suggested Read: 8 Haunted Places In Karnataka: Are You Ready To Challenge Your Soul?

The Kotilingeshwara temple is considered to be one of the most famous temples in Karnataka. The temple is situated in a small village called Kammasandra in the Kolar district and is famed for housing the tallest and largest Shiva Linga statue in Asia. Every year close to 2 lakh devotees visit this temple and mostly on Maha Shivaratri, special offerings are made to the Shiva Linga on this auspicious day.

Suggested Read: 10 Famous Temples In Hyderabad For Your Spiritual Quest!

Built in 578 AD, the Badami Cave temples are one of the widely known historic temples in Karnataka. Constructed in Chalukya-style architecture, the Badami temples house four caves that consists idols of Lord Shiva, and Lord Vishnu while one of them is dedicated to Jainism. Badami is an amazing tourist place as it contains spectacular cave temples, Badami Fort, and other beautiful temples around the Agastya tank. Tourists can easily reach the place through nearest airports Hubli and Belgaum.

Located very close to Badami, the Banashankari Amma temple should be one of the must-visit temples on your Karnataka temple list. Constructed by the Chalukyas in the 7th century, the temple is dedicated to goddess Banashankari Amma. Although originally it resembled the Chalukya style architecture, the modern structure showcases more of the Vijayanagara architecture. This temple is also accessible from Badami and is located close to the Belgaum airport.

Suggested Read:
11 Mystical Places To Visit In Badami, Karnataka That Need Your Attention In 2020

Constructed in the memory of Guru Vidyashankara, the temple boasts of both Dravida and Hoysala style of architecture. The temples contain ruby images of Lord Srinivasa, Lord Venugopal and Nandi constructed from a large pearl. Several inscriptions describing the Vijayanagar emperors are seen across the temple and it is undoubtedly one of the best temples in Karnataka. The temple is easily accessible from all major cities via bus and train.

Suggested Read: 12 Stunning Places To Visit In Summer In Karnataka For A Relaxing Retreat In 2020

One of the most ancient temples in Karnataka is that of the Vitthala temple situated in Hampi. Dedicated to Lord Vishnu, it is a popular temple set amidst the ruins of Hampi. The Vitthala temple is popular for its musical monolithic pillars and the stone chariot. An important part of the ruins, it is one of the best UNESCO World Heritage Sites in India and one can reach the temple from Hospet Railway Station or Bangalore Airport.

One of the most famous temples in India, the Kollur Mookambika Temple is nestled amongst the hills of Kodachari in the Western Ghats. It is said that this temple is at least 1200 years old and is extremely beautiful. The legend behind this temple is very interesting which is that its believed that goddess Parvati killed Kamasura, a demon who was harassing her.

Suggested Read: 20 Things To Do In Gokarna For Escaping The Monotony Of Life In 2020!

A famous pilgrimage centre in the North Kannada district and a popular tourist spot, Gokarna is home to the serene Mahabaleshwar Temple. The temple is dedicated to lord Shiva and is also known as Dakshina Kashi. The temple is believed to be very sacred and have many great powers.

Further Read: Visit These Temples In Gokarna For A Religious Tour In This Paradise in 2020

While the list is never-ending, the above mentioned are some of the main and best temples in Karnataka that one should not miss on their next holiday. So next time you plan on embarking on a temple tour, make sure you tick all these temples in Karnataka off your list for an enriched experience. If you are excited enough then look no further and plan your trip to Karnataka right away.

Q. How many temples are there in Karnataka?

Q. What is the famous temple in Karnataka?

A. Some well-known temples in Karnataka are Karkala, Murudeshwara, Gokarna, Kollur, Kukke, Dharmasthala, Sringeri, and Horanadu. These temples are thronged by thousands of pilgrims in a day.

Q. Which is the biggest temple of Karnataka?

A.  Srikanteshwara Temple is the biggest temple of Karnataka, India.

Q. Which God is worshipped in Karnataka?

A. Shiva (Linga) is worshipped in Karnataka by the majority of the locals. Dharmasthala Manjunatha temple, along with other well-known temples in Karnataka, has an idol of Shiva in their premises. It is the prime attraction of every temple.

Q. Why is Karnataka so famous?

A. Karnataka is one of the prime tourist hotspots in India due to its natural beauty, stunning backwaters, and rich cultural heritage. Some of the best places to visit in Karnataka to witness the beauty of India in its full glory are Bangalore, Coorg, Kabini, Jog Falls, Shimoga, Mangalore, and Karwar.

Q. Which is the tourist month of Karnataka?

A. The tourist month of Karnataka extends from November to April. We advise you to avoid visiting Karnataka in the monsoons due to incessant rains in the region that may derail your travel plans.

Q. Which is the first temple in Karnataka?

A. The first temple in Karnataka was Malapalli Deva temple in Malavalli, Shivamogga District. It dates back to the 2nd century CE.

Q. What are the historical places in Karnataka?

Shopping In Coorg 2020: Pick These 8 Best Places To Enjoy A Shopping Spree!

17 Most Popular Temples In Bangalore To Visit For A Spiritual Retreat In 2020!

11 Things To Do In Shimoga That Will Make You Fall In Love With The City In 2020!

Visit These Temples In Puri For A Historical Tour Of This Pilgrimage Site In 2020!

6 Places To Visit In Kabini In 2020: A Paradise For Nature & Animal Lovers!