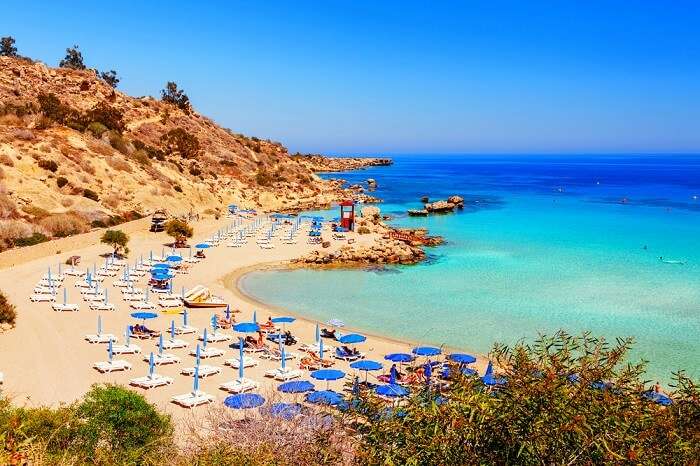 A cosmopolitan country like Israel has many exciting places and activities for every kind of traveler. It is not only a land of lush greenery, dry canyons, and humid deserts but also most economically developed cities in the world. Apart from the holy sites of Judaism, the country has many coastal cities to explore and some ancient ruins. Israel’s geographical presence in the Levant region makes its access to the other parts of the continent easy. If one wants to explore regions beyond the borders of the country, here are some places near Israel that are worth spending a day or a weekend in.

9 Marvelous Places To Visit Near Israel

Take a look at all these fascinating places near Israel that you can visit with your friends, family, better half, or even solo. So, which of these would you like to explore first?

Located in the country of Jordan, Petra is one of the great weekend places to go near Israel. The famous archeological site is also a wonderful city built in the sandstone rock formations during the ancient Roman times. The main attractions are the treasury entrance, dam, the Roman theatre, and the numerous tombs. After a day trip in the historical city, one can relax in many of the comfortable hotels and resorts available in Jordan. Bringing back home any kind of souvenirs from this ethereal city is strictly prohibited as even a small stone on the path is a major archeological evidence.

Location: Jordan
Distance from Israel: The nearest city to Petra in Israel is Tel Aviv (about 450 km)

Situated in the Judeau mountains between Israel and Jordan is the Holy city of Bethlehem; for both Christians and Jews alike. Bethlehem is a major pilgrimage site located about 8 km south of Israel which houses the Church of the Nativity, Mar Saba monastery and Rachel’s tomb. This historical place attracts millions of visitors from all over the world and is a perfect place to visit near Israel to get a weekend fix. Since Bethlehem technically lies in the Palestinian borders, visitors are expected to carry their passports with an Israeli visa all the time.

This Holy place can be reached either from Tel Aviv or the city of Jerusalem. Public buses are available to ease the commute while personal vehicles are also admitted. One has to undergo a security check at the border compulsorily but it is hardly intimidating. The UNESCO site has many cafes and restaurants in the Manger square and a few mid-range hotels are available for a comfortable overnight stay.

Location: West Bank in Palestine
Distance from Israel: Bethlehem is 8 km away from Jerusalem and 78 km from Tel Aviv.

Suggested Read: 10 Places For Scuba Diving In Israel To Satiate Your Adventure-Lust In 2022!

Another major tourist hotspot on the West Bank of the River Nile is the Great Pyramids of Egypt. The Plateau of Giza is a home to many of the ancient Egyptian marvels such as the Great Sphinx, the three Great Pyramids and the tomb of King Tutankhamun. It also houses a number of museums that give the visitors an insight on the Egyptian culture during the times of the Pharaohs. The sound and the light show on the Great Pyramids of Giza is an added bonus to a weekend trip from either Eilat or Tel Aviv. The Solar Boat Museum is a must visit during the trip to the pyramids that lets one learn about the Egyptians interesting take on the afterlife concept in their culture.

Location: Cairo
Distance from Israel: The Pyramids are about 6-hour drive from Eilat.

Baalbek is a historic city of ancient Roman ruins lying on the East bank of River Litani in Lebanon. The Temple of Bacchus and Jupiter are the major marvels to be seen amongst the ruins. Monolithic structures from the Roman occupation still present an awe-inspiring wonder in the city. Coming back to the present times from the ancient Roman rule, Baalbek is the home to the greatest music and dance festival in the Middle East- The Baalbek International festival. It is the oldest public event to be held in the grounds of the Temple of Bacchus and takes place in either July or August months of every year. A trip to this archeological city is perfect for a long weekend from Tel Aviv.

Location: Lebanon
Distance from Israel: Baalbek is 415 km away from Tel Aviv.

Cyprus is a Mediterranean Island with Greek influence to the northwest of Israel. The white beaches and the clear turquoise waters make this island a sanctum for beach bums. However, the island is also a treasure cove of ancient crusader castles, museums and hiking trails to numerous waterfalls. The cobblestone streets of this city of Aphrodite leads to various archeological sites that gives one a peek into the ancient Greek culture. A thing that the Cypriots take very seriously is their passion for food. The meze, halloumi cheese and the lamb dishes such as souvlakia are a must try here along with the local beer called Keo. Cyprus is one of the amazing places to visit near Haifa, Israel.

Distance from Israel: Visitors have an option of a 45-minute flight from Tel Aviv or a 2-day cruise from Haifa.

Alexandria is a port city to the west of the Mediterranean Sea in Egypt. The city has a major influence of the Hellenistic culture and thus houses many monuments related to the civilization. The major attractions of the city are the Bibliotheca, the Montazah Palace, and the Fort Qaitbey. Alexandria is also famous for many local souks that sell the various Egyptian spices and artifacts. The city is lined with cafes that sell the traditional coffee and fish dishes exclusive to Egypt. This economically important city of Egypt is just 2 hours away from Cairo for an extended vacation from Israel.

Distance from Israel: Flying to Alexandria from either Tel Aviv or Eilat takes about 2 hours and is a better option from traveling by road.

Athens makes a great vacay on the other side of the Mediterranean. To relive the ancient civilization of Greece, one should visit the Pantheon, the Acropolis and the various temples dedicated to the Greek Gods such as Zeus, Aphrodite, and Apollo. Athens also has a modern side to it filled with nightclubs, bars, and restaurants. One should visit the Psiri area for the best nightlife. Athens also houses a number of museums and colorful neighborhoods where one can spend some quiet time savoring the beauty of the city. A few Michelin star restaurants in the area offer traditional Greek food with an interesting twist to it which is a must try.

Location: Athens, Greece
Distance from Israel: Athens is just 2 hours away by flight from Tel Aviv

Istanbul, the city of Ottoman rule is a cultural cove of Turkey. This capital city of Turkey hosts the most stunning architectural creations such as the exemplary Blue Mosque, Hagia Sophia, Topkapi Palace, and various other museums and galleries. Since the country was in a major trade route between the East and the West, one can find merchandise from both the sides of the globe in the Grand Bazaar. While the cultural heritage is marvelous, the nightlife in Istanbul is exceptional. The waterfront areas such as Arnavutkoy is famous for its seafood bars and restaurants.

Location: Istanbul, Turkey
Distance from Israel: A 2-hour flight from Tel Aviv will get one to Istanbul

Georgia is a small country on the East bank of the Black Sea, situated at the threshold of Europe and Asia. It is thus evident that the country is an amalgamation of the European Catholic culture and the Asian food culture. Tbilisi, the capital of Georgia has a number of cave towns in its surroundings that provide a perfect day hike in the picturesque landscapes of the country. It also houses a few museums that are fairly cheap and provide insight into the world of Stalin. Georgia is famous for its wine where one can have a field day at their vineyards and have a quick class on making of the Georgian wine in earthen clay pots.

Location: Georgia
Distance from Israel: There are direct flights from Tel Aviv to Tbilisi that take about 2.5 hours.

Israel and its neighboring countries have something for every kind of travel enthusiast. From sea adventures to cultural walks, all the above mentioned (and more) places near Israel fulfill every whim of its visitors. So, why think twice? Plan your trip to Israel today and experience the wondrous creations of nature on your holiday.

What can you see in Israel in 6 days?

What are Israel’s major cities?

What is the oldest city in Israel?

Jerusalem is one of the oldest city in Israel that arose between 4,000 and 5,000 years ago.

What is the smallest city in Israel?

Na’ale is the smallest city in Israel.