6 Best Places To Visit In Alexandria One Must Visit To Explore The History Of Pharaohs City! 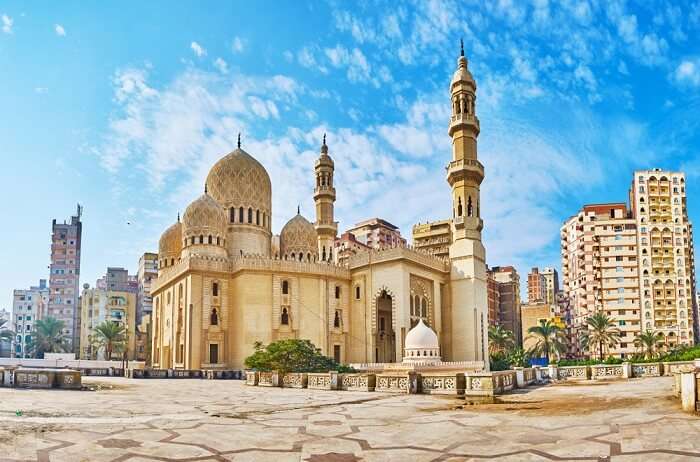 Named after Alexander the great, this marvellous and extravagant city of Alexandria was once the ruling ground for Cleopatra. In the present, this city is the second largest in Egypt and known for its great architectures and spectacular locations. A major economic centre now, this city is home to the Great Library of Alexandria and Pharos lighthouse which is one of the seven wonders of the ancient world. Indeed a paradise for the history lovers, these places to visit in Alexandria will take you on a tour to explore the best sights of the town.

6 Best Places To Visit In Alexandria

Here is a list of some of the famous attractions in Alexandria which will give a glimpse of the city’s history in the most beautiful way. 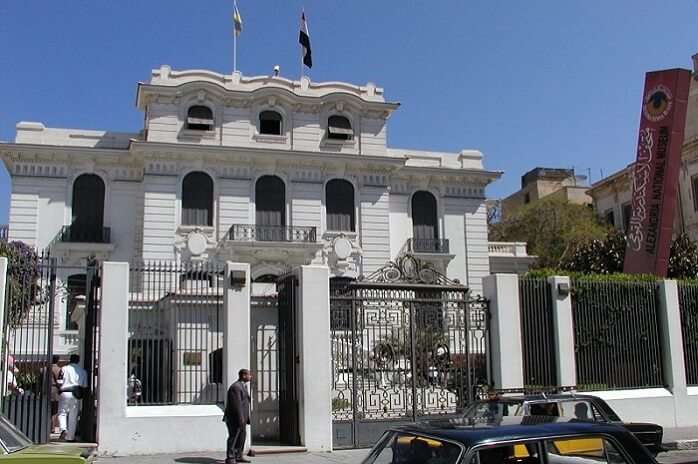 Image Source
Get along on the journey to explore the vast history of this famed city only at the Alexandria National Museum. Inside this historic museum, there are remnants of the Pharaonic era till the Hellenistic Heyday. One can also find remains of that time when Alexandria and Egypt were under the rule of Ptolemy Dynasty started by the Alexander the great. Alongside this, there are other displays and antiques which are unearthed around the city.

Must Read: Hiking In Egypt: Explore The Country Through Its Spectacular Trails 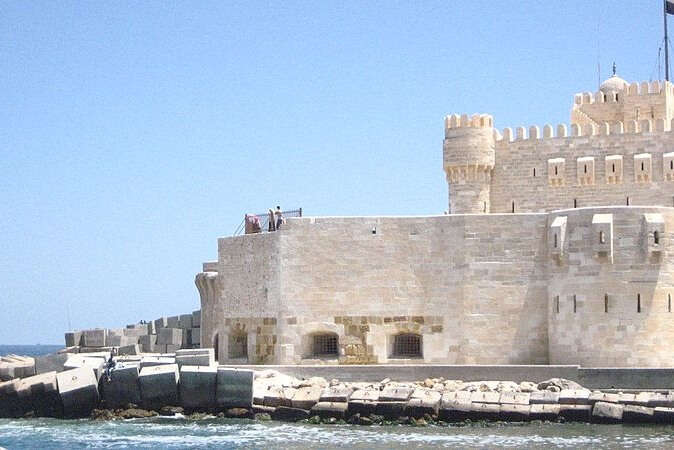 Image Source
Take a walk around the long shore-front of Corniche road to witness the beauty of the magnificent Fort Qaitbey. Guarding Alexandria’s eastern harbour since 1480, this miniature fort is actually an alternative to the Pharos lighthouse. This fort was built to protect the Egyptian port from intruders and at present day it’s just a monument which reflects the past of the city. The inside of the fort features stone-walled chambers and one can take a panoramic view of the Mediterranean sea by climbing at the top of the fort.

Suggested Read: 10 Things To Do In Egypt In March To Explore The Best Of This Country 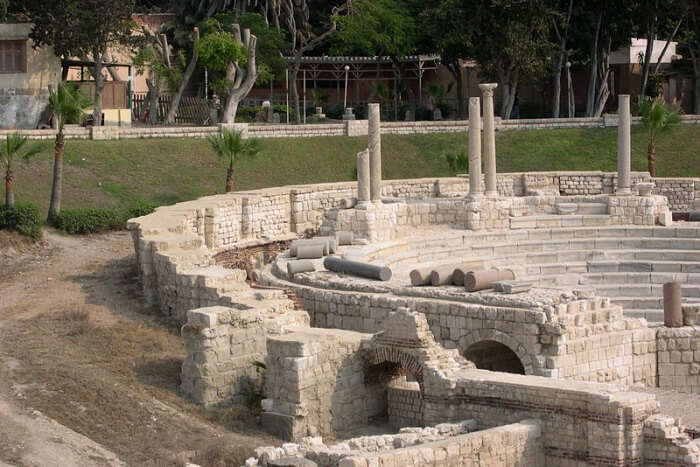 Image Source
This was a famous residential area built during the Roman-Graeco times which featured exotic villas, bathhouses and a theatre. Often called the Park of Pan, this place was the ultimate leisure area for the citizens of Alexandria. Kom-el-Dikka was discovered in 1967 and in the present day this place includes the remnants of a Ptolemaic temple and a Villa of Birds which is actually a mosaic flooring of wealthy Roman Era dwelling. 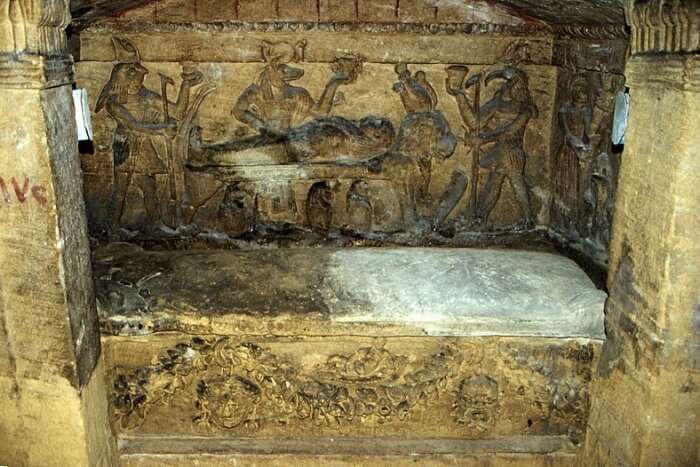 Image Source
The Catacombs of Kom el-Shuqqafa is a perfect example of the Alexandrian fusion of Egyptian and Greco-Roman styles. This architecture dates back to the 2nd century AD and was discovered close to the year 1900. These catacombs are laid out on several levels of chambers which are connected by spiral stairs.

Suggested Read: Summer In Cairo 2022: A Guide On How To Embrace & Escape The Egyptian Sun

Image Source
At the southwest of the city in a town named Carmous lies the hill littered holding the remnants of ancient walls, architectural fragments, and rubble where the one and only Alexandria’s ancient monument stands. Amidst this ruin stands the Pompey’s pillar which rises from the pile of ruins and the Temple of Serapis which was once used to store manuscripts. Reaching the height of 27 meters, this pillar was set up in the honour of Diocletian in AD 292. 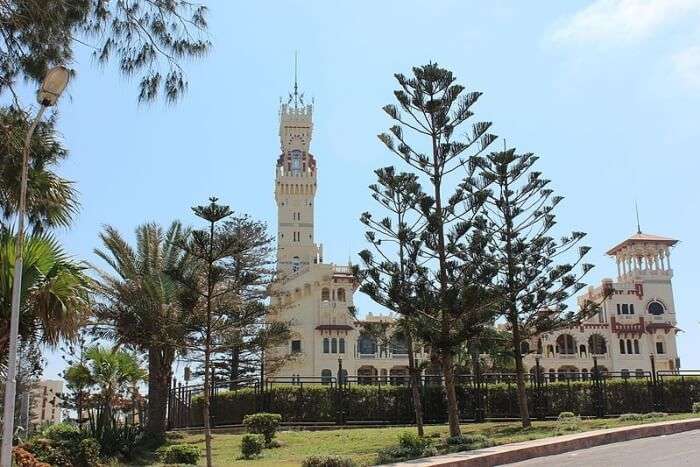 Image Source
Resting at the eastern edge of the city, Montazah gardens was originally built as the palace for King Farouk. Boasting a spectacular view of the Mediterranean sea, this lavish garden is spread across a vast area and often makes a great place to find relaxation. Once a summer house for the royal family, now this place is an attraction which let people see the ornate Florentine-inspired towers and Rococo flourishes.

Further Read: Know All About The One & Only Waterfall In Egypt Of The Magical Wadi El Rayan!

These places in Alexandria still holds the history of Egypt within its architectures and sightseeing and will be a great escape for the people who love to dwell in the history and heritage of the place. Thus if these places excite you, then plan your Egypt holiday with TravelTriangle and enjoy a fun-filled getaway at the second largest city of Egypt.

Frequently Asked Questions About Places To Visit In Alexandria

What are the famous attractions in Alexandria?

What is Alexandria famous for?

Is it safe to visit Alexandria during Covid times?

Yes, it is perfectly safe to visit Alexandria, however, you need to follow the travel advisory mentioned by the authorities, along with taking the required safety measures. Make sure that you have completed both the doses of vaccinations and get yourself tested at least 48 hours before your departure. You need to follow all the travel guidelines mentioned by the authorities.

How do I spend a day in Alexandria?

What is the best time to visit Alexandria?

What should one wear while being in Egypt?

Travellers can wear anything they like while travelling to Egypt. However, it is advised that one must wear light cotton or linen clothes. Travellers must also put on sunblock while sightseeing in Egypt.

What is the entry fee for Fort Qaitbey?

Travellers are required to pay an entry fee of around 15 Egyptian pounds to visit the Citadel of Qaitbay. There are discounts available for students. It is amongst the most visited tourist attractions in Alexandria and welcomes visitors throughout the year.

What language is spoken in Alexandria?