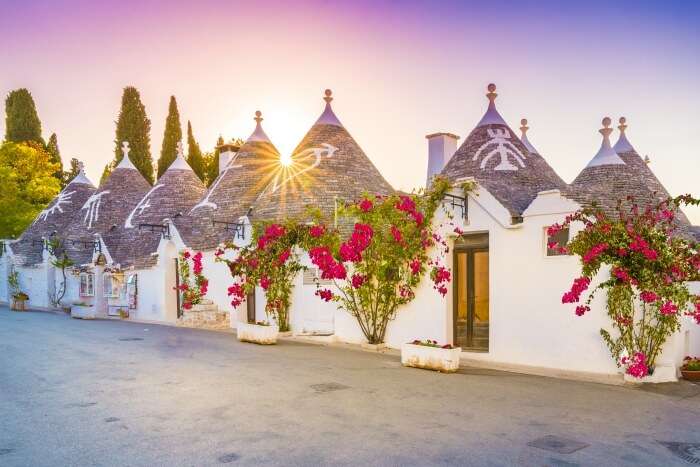 The lesser known city of Bari is situated in southern Italy surrounded by the Adriatic Sea. Bari is capital of Apulia and Metropolitan City of Bari. The city is also famously known as the port city, university city or city of Saint Nicholas. The northern section of Bari is located in proximity to the old town between the harbors. The major places to visit in Bari in the north section acquire Saint Nicholas Basilica, Hohenstaufen Castle and Saint Sabino’s Cathedral. This part is also well known for its nightlife. The city plays a significant role as it is the main economic point of mainland southern Italy. The port city spreads over the area of 116 square kilometers which is divided into four main parts.

10 Fantastic Places To Visit In Bari

The university city is well connected via major airports in Europe accommodating around 40 flights daily.
This travel guide will help you plan your trip to Bari so that you don’t miss out on the top places to visit in Bari Italy.

Image Source
Situated in southern Italy, Basilica of Saint Nicholas is a cathedral in Bari and one of the best places to visit in Bari Italy. The cathedral was erected between 1087 and 1197. It holds great religious significance in Christianity all over Europe, and that's why it is considered one of the most important pilgrimage resort among Europeans. It looks more like a castle than a church due to its square shape and was indeed used as a castle at that time. It comprises some of the relics of Saint Nicholas from his shrine in Myra, known as Turkey today. The most attractive part of the cathedral is two low rising towers in the facade.

The church houses bishop’s throne, various Romanesque sculptures, the ciborium with mosaic decoration, a collection of candlesticks from the 16th century and mythological figures etc.

Image Source
Unlike Saint Nicholas Cathedral which is the most famous places to visit in Bari for a pilgrimage, the Bari Cathedral is not as famous. It was made in honor of Saint Sabinus, who was a bishop of Canosa and is home to some of the relics of Saint Sabinus which were assembled here in the 9th century. The cathedral was constructed over the Imperial Byzantine ruins which were destructed by William I of Sicily in 1156. Interestingly, the traces of the actual pavement can be seen here. It is an excellent representation of Apulian Romanesque hence making it one of the best places to visit in Bari.

Must Read: Italian Cuisine: Top 10 Dishes That Let You Taste The Authentic Flavors Of Italy!

Situated in the heart of the city, Bari Vecchia is an old town that has made its place to the Bari tourist map. The vivacity of town will surely surprise you with its magic and atmosphere. The town is quite accessible to numerous famous spots in the city. It is located at a distance of 300 meters from the Swabian Castle, 500 meters from the Saint Nicholas Cathedral and 400 meters from the cathedral of Saint Sabinus. The central location of the town will give you a great chance to explore the city center and other nearby places. The town has various places that offer large portion breakfast options in an open terrace environment.

Image Source
Teatro Petruzzelli is the largest theatre in Bari and fourth largest theatre in Italy. The theatre was built in 1903 to host various live events and concerts. Its decoration and designing are complemented with the paintwork of Raffaele Armenise. Out of the number of events hosted by theatre, the two significant debuts were Iphigénie en Tauride by Niccolò Piccinni and Neapolitan version of Bellini's I Puritani, which made the city famous all across the globe as these were never played after being played at Teatro Petruzzelli.

Some of the other events being conducted in theatre are ballets, large scale concerts, and operas. Scores of world-famous artists performed on the stage of theatre including Frank Sinatra, Giorgio Gaber, Riccardo Muti, and Liza Minnelli etc.

The theatre was destructed by fire on 27th October 1991, which was again opened to the public after 18 long years in October 2009.

Image Source
The Castello Svevo is also called as Swabian Castle, situated in the Apulian city of Bari. King Norman Roger II constructed the castle in 1132, which was destroyed by King William I in 1156. Roman emperor Frederick II rebuilt it in 1233. The castle has undergone several transformations during the time of Angevin domination. It was finally returned to King of Naples, which was later converted into barracks and prison. The sea outlines the northern part of the castle, whereas a moat surrounds the southern part on each side. The castle is used as a museum to exhibit different forms of art. If you are going for Bari sightseeing, put this attraction on your list.

Image Source
Pinacoteca Metropolitana di Bari is well known as the art and painting gallery of Bari city which has the most exquisite collection of varied categories of art. The gallery was built in 1928 at the Palace of Government and later moved to the seaside situated Province Palace in 1936. The renowned painter Corrado Giaquinto inspires the name of the art gallery.

Some of the artworks included in the gallery are Antique apparel, Apulian Medieval Majolica ceramics, a section of paintings by Corrado Giaquinto and a 19th century Neapolitan and Southern Italy paintings collection etc.

Located in the south of Italy at a distance of 62 km approximately is Alta Murgia National Park which was formed in 2004. It is listed as one of the favorite places to visit around Bari Italy. The sprawling national park covers an area of 677.39 square kilometers. It's a notable option for those who are looking forward to exploring the majestic landscape, ancient disowned villages and stone structures. It also provides a great site to indulge in a countryside atmosphere where one can enjoy activities such as cycling and hiking. It is one of the amazing places to visit near Bari.

Many travel operators from Bari city organize day trips to this worth visiting national park.

Suggested Read: 10 Bari Villas To Enjoy The Adriatic Sea And The Historic Town Of Barivecchia In 2021

Image Source
The most worthwhile part of being in Italy is the stunning coastline that provides an opportunity to witness some of the beautiful beaches. There are some beaches in and near Bari that would take you on a fun-filled trip. Pane e Pomodoro is one such beach in Bari itself that attracts many travelers, especially during summer. In fact, it is very popular with the locals as well. Bari Beaches are undoubtedly the best places to go in Bari..

Cala Paura in Polignano is another beach that is very famous with the Bari locals. The beach offers mesmerizing views and captivating sunset. It is undoubtedly one of the ideal places to visit around Bari Italy for those who are looking ahead to try some local fried fish by the coast.

Image Source
One of the popular Bari tourist attractions, Lungomare Nazario Sauro is a coastal promenade that extends to 1000 meter approximately. The promenade offers a sublime atmosphere to sit back and relax while admiring the cool breeze. Apart from a walking alley, this coastline destination also provides a view of gorgeous whitewashed buildings and Bari architecture. The southern section of Bari has the number of shopping centers, a promenade along the seaside and Murat quarter which was built by Joachim Murat.

Via Sparano is the trendy shopping arcade situated in Bari. It's a great place if you are in need of some retail therapy. The shopping alley is located in the new district of Bari that stretches till Piazza Aldo Moro. The street accommodates most of high street shopping brands like H&M, Zara, Armani and Disney store etc. Apart from retail, the shopping street also includes a wide range of cafes, bars, and restaurants to spend beautiful evenings.

The airport in the city was reconstructed and named after Pope John Paul II, Karol Wojtyła Airport. The airport is located at a distance of 8 km from the main town.The port city can be visited any time of the year due to its pleasant temperature. Bari is surely a destination that would not fail to surprise you with the charm of its history and culture. With our list of best places to visit in Bari, plan your trip to Italy or the best vacation. Contact TravelTriangle now for bookings!

Q. What is Bari famous for?

A. Bari is the city of Saint Nicholas and is well known as a city of port and universities.

Q. Is there an airport in Bari, Italy?

A. Yes there is an airport in Bari named as Bari Karol Wojtyla Airport.

Q. What does Bari mean?

A. In Arabic, Bari means creator or free.

Q. What province is Bari, Italy in?

A. Bari is located in the Province of Bari.

5 Best Places To Visit In Nangal To Make Your 2021 Trip Worthwhile!

15 Best Places To Visit In Uttarakhand In December 2021 For A Refreshing Escape!

Kasauli In December: When the City Transforms Itself Into Heaven