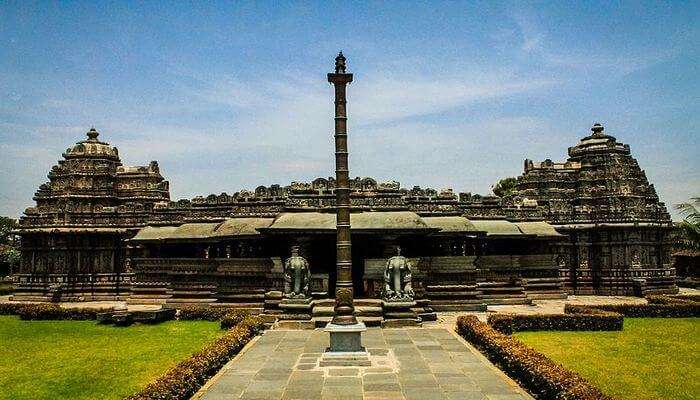 If there is one place that exemplifies the royal beauty and exquisite craftsmanship of South Indian architecture, it’s Belur. The myriad places to visit in Belur corroborate the fact how beautiful and enchanting this place is. Located around 220 km from Bangalore, Belur is small temple town nestled on the banks of River Yagachi in Hassan district of Karnataka. Popularly known as “Banaras of South” or “Dakshina Banaras” Belur is one of the most famous destinations in Karnataka.

Belur, the erstwhile capital of the Hoysala Kingdom is home to several monuments, temples and holy shrines, making it one of the most significant pilgrimage spots for the people of the Hindu community. Besides, Belur is also a popular destination attracting huge crowds every year from different corners of the world.

This temple town was once the capital of the mighty Hoysala Empire and was formerly called as Velapura or Velur. You will be amazed with a wide range of tourist places in Belur, that are not just breathtaking but justifies the true meaning of “Incredible India”.

The town experiences subtropical climate and moderate weather throughout the year. During the summers, the temperature can rise up to 33 degree celsius whereas in winter it drops to below 16 degree celsius. The place also receives an average rainfall of about 367 mm every year. The best time to plan your trip to Belur, Karnataka is between October and March.

8 Marvellous Places To Visit In Belur

To make the most of your vacation to this ancient town in Karnataka, we have handpicked some of the best places to visit in Belur. Have a look!

Located just 500 meters from Belur Bus Station, this ancient temple is one of the finest testaments in the town. As per historians, it took around 100 years to complete this spectacular temple and completed in 1117 A.D. The entire facade of this holy shrine is intricately carved using soft soapstone with no space left blank. Festooned with exquisite carvings and artistic stone sculptures, Chennakesava Temple is one of the must visit places in Belur.

Dedicated to Lord Vishnu, the protector of the universe, this imposing marvel was built by the great King Vishnuvardhana of Hoysala Dynasty. The temple boasts a grand 100 feet high gateway at the entrance and a six feet tall idol of Lord Vishnu placed inside the temple.

The unique 645 elephant carvings, sculptures of Madanakai damsels, carvings in Navarang, episodes of the Puranas, the Upanishads and the epics of the Ramayana and the Mahabharata are the major crowd pullers.

Must Read: 12 Hill Stations In Karnataka In 2021 To Rejuvenate Yourself

Surrounded by lush green landscape and blessed with a cool breeze in the evening, Yagachi Dam is an ideal weekend escape among the locals and tourists. The place is also one of the top places to visit in Belur for rejuvenating your body, mind and soul. The dam is built across River Yagachi, a tributary of the River Kaveri.

It is located just 10 km from the city center and 2.5 km from Belur Bus Stand. Constructed in 2001, Yagachi Dam is an earthen gravity dam standing tall at an altitude of 965 feet above sea level and have extensive dimensions of 26 meters in height and 1280 meters in length.

Recently, to attract more tourists flock in large numbers, Yagachi Water Adventure Sports Centre was established in the backwaters of the dam. Thrilling and exciting water sports activities like cruise boat, banana boat ride, kayaking, jet skiing and speed boat are some of the major highlights of this enticing tourist destination.

Belur-Halebidu go together like twin cities, as the distance between them is only 17 km. Regarded as one of the best places to visit in Belur karnataka, Halebidu once served as the royal capital of the great Hoysala Dynasty during the 12th century. The place is admired for its intricate Hoysala architecture, minute & intricate carvings, the detailed ornate temples, amazing sculptures with metal like polishing and much more.

Halebidu also called Dorasamudra or Dwarasamudra, is inclusive of two Hindu temples dedicated to Lord Shiva, two Jain basadis and an archeological museum in the temple complex, which are the major highlights. Built on a star shaped platform, the Hoysaleswara Temple was built during 1121 AD by King Vishnuvardhana. One can see the finest depictions from Hindu mythology, animals, birds and dancing figures on the walls of this temple.

At a distance of 25 Kms from Belur, lies yet another popular destination called Doddagaddavalli. The famous crowd puller here is the gorgeous temple of Lakshmi Devi. A rare gem of architecture, this temple was built under the reign of King Vishnuvardhana during the 12th century. The temple is absolutely in pristine condition and can be spotted from the road that leads to Doddagaddavalli from Belur.

Lakshmi Devi Temple sits amidst lush green surroundings and is also accompanied by a shimmering water body, making it a must-visit place on the tourist’s itinerary. In the inner sanctum, you will find tall idols of Hindu deities – Lakshmi, Shiva, Vishnu and Kali.

Only 27 km away from Belur, Belavadi makes an amazing getaway in Karnataka. It is mainly famous for the majestic Sri Veera Narayana Temple which is an important pilgrimage site for the devotees. The temple is built in the 13th century in Hoslaya style of architecture. The intricate carvings on the wall are a proof of it. According to a legend, this is where Bheema killed Bakasura to protect the villagers from the demon.

Suggested Read: 14 Historical Places In Karnataka Every History Buff Should Visit In 2021

This is one of the famous temples located in Belur which is dedicated to Lord Shiva which is made of black stone. The architecture of the temple boasts a Chalukyan style of architecture which was built around the 1319 AD. Inside the temple there is a basement which features sculptural friezes depicting the story of Ramayana, Mahabharata and Bhagavad Gita. It’s amazing architecture makes it one of the best tourist places in Belur.

Suggested Read: 5 Best Places To Visit In Chikmagalur In May To Absorb The History Of Karnataka!

7. Archaeological Museum – Learn The Past

This is an open air museum located at Halebid which is a home to many sculptures, exhibits, inscriptions and many more things. All these display the Indian Art at various foreign exhibitions. Inside the museum one can witness a statue of Dancing Shiva, Nataraja and Veena Saraswati. Alongside that there is a beautiful bronze statue of Tirthankara.

Suggested Read: 11 Places To Visit In Bidar To Admire The Beauty Of Karnataka In 2021!

The Hoysaleswara Temple or the Halebid Temple is a famous hindu temple which was built in the 12th century. Situated at the west of Dwarasamudra lake in Halebid, this is quite a magnificent temple which is considered a landmark of the Hoysala empire. Considered to be one of the best places to see in Belur, this temple is quite a significant monument which is dedicated to Lord Shiva in South India.

Belur is a great vacation destination for travellers seeking a unique vacation beyond mountains and beaches. The ancient monuments, temples and holy shrines of Belur will teleport you back to several centuries, thus enriching the essence of your holiday. So, bag you bags and plan a remarkable trip to this land of culture and heritage. There is a lot to delight in for those who are in love with art, culture and architecture and of course photography.

Frequently asked questions about places to visit in Belur

Q. How many days are required to visit Belur?

A. If you wish to explore all the tourist places in Belur mentioned above, then you need at least 3 to 4 hours. There are plenty of renowned tourist hotspots as well nearby Belur like Shravanabelagola, Chikmagalur & Halebidu, demanding a few additional days to your trip.

Q. What are some must-visit places & things to do while visiting Belur?

A.  Chennakesava Temple, Yagachi Dam, and Narasimha Pillar are some of the must-visit places to visit in Belur.

Q. What is the budget required to visit Belur?

A. Your budget to Belur trip depends on lots of factors like the trip duration, the hotel you choose to stay and the transport mode you prefer.

Q. What is the best season to visit Belur?

A.  Winters i.e. October to March, when the weather is mild and pleasant, is considered to be the best time to explore the historical town of Belur.

Q. How far is Chikmagalur from Belur?

Q. Which of the famous temple is located at Belur?

A.  The Chennakeshava Temple featuring an imposing six feet tall idol of Lord Vishnu in the inner sanctum and unique 645 elephant carvings and sculptures of Madanakai damsels is the famous temple here and one of the top places to visit in Belur.

Q. How far is Belur from Bangalore?

A. Belur is about 218 km from Bangalore by road along with an aerial distance of 188 km. If you take a bus from Bangalore, then it takes around six hours to reach Belur.

Q. Who built the Belur Temple?

A. The famous Chennakesava Temple (also called as Belur Temple) was constructed by King Vishnuvardhan, a famous Hoysala ruler.

Q. What is the old name of Belur?

A. Belur was once the capital of the Hoysala Dynasty during the 11th century and was known as Velapura or Velur.

Q. How do I get from Belur to Mangalore?

Camping In Uttarakhand: 25 Best Spots To Treat The Adventure Junkie In You In 2021!

Temples In Kovalam: Time For A Spiritual Tour In The City With Your Family

Note Down These Electrifying Things To Do In Munnar In December Which You Must Not Miss!

Islands Near Krabi: Head To These Awesome Islands For A Relaxing Vacay!