11 Places To Visit In Bidar To Admire The Beauty Of Karnataka In 2020! 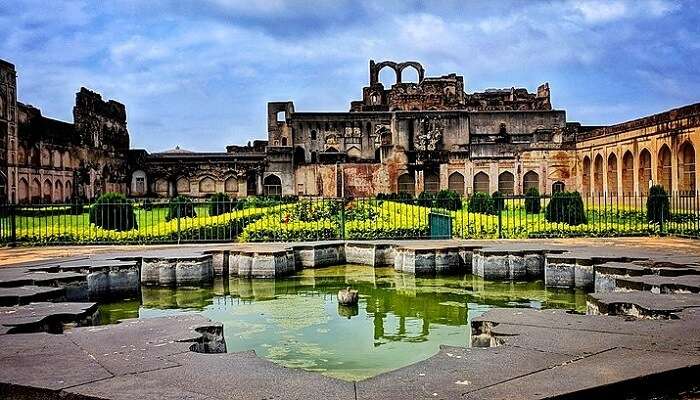 Drenched in Islamic Indian history – Bidar is a city full of amazing ruins and monuments located in the state of Karnataka. Bidar is a small town that was once the capital of Bahamani Kingdom and has witnessed numerous vicissitudes in its eventful history. The aura of this city is appreciated by many and the rich ancient heritage attracts plenty of travellers across the country. You can find a number of places to visit in Bidar that dates back to the 15th century during the rule of Bahamanis.

Bidar is a destination that has plenty to offer. Ranging from forts and temples to gurudwaras and mosques, there is something for everyone. This is the town that showcases religious harmony perfectly. Find below the list of all the top tourist places in Bidar that one should surely visit.

One of the best and magnificent places to visit in Bidar, the Fort is a wonderful specimen of the Persian architecture. Well-maintained, Bidar Fort stands tall with pride of its historical significance and is one of the most famous places to visit in Bidar. The origin of this fort is unclear but it saw power during the middle ages when it came under the rule of the Bahmani dynasty and was rebuilt by Sultan Ahmed Shah Wali. Within the fort complex, there is an old city with structures and monuments from the Bahamian era. Among these monuments, Rangin Mahal, Gagan Mahal, and Tarkash Mahal are popular. You can also see notable mosques like Solah Khamba Masjid and Jami Masjid in the fort. The Diwan-i-Am or Jali Mahal, Diwan-i-Khas or Takht Mahal or Throne Palace, and Valkoti Bhavani with few settlements are a few other visiting places in Bidar.

Must Read: 7 Mystical Places To Visit In Badami, Karnataka That Need Your Attention In 2020

Another one of the beautiful places to visit in Bidar Karnataka is the Gurudwara Nanak Jhira Sahib. Dedicated to the 1st Sikh Guru Nanak Dev Ji, this Gurudwara was constructed in the year 1948 and now is an important pilgrimage site in Bidar. Immensely beautiful, this shrine is nestled in a valley, surrounded by laterite hills on 3 sides and offers tranquillity to the visitors. There is a Darbar Sahib, Diwan Hall, Langar Hall and the Sukhasan room with a Guru Granth Sahib (the holy book of Sikh) in the temple.

Suggested Read: 9 Historical Places In Karnataka Every History Buff Should Visit In 2020

Mahmud Gawan Madarsa, located in the old part of the city Bidar is the remains of a building that was once a theological college and is one of the beautiful tourist places in Bidar. Constructed by a Persian merchant named Khwaza Mahmud Gawan in 1472, this madrasa is one of the top places to visit in Bidar. This building is built over 3-levels with 100feet minarets in four corners is enriched with calligraphy in Thuluth script, intricate tile work and inscribed with verses from the Holy Quran.

Earlier, this madrasa featured a mosque, library, lecture halls, a laboratory, and a library where 3000 Persian books were kept. Also, there were 36 rooms for students and 6 suites for the teaching staff.

Suggested Read: 7 Major Airports In Karnataka For A Safe & Joyful Trip In The Air

Dedicated to the lion god Narasimha, the incarnation of Lord Vishnu, this shrine is one of the most famous places to visit in Bidar. Also called as the Narasimha Zarna Cave temple or Jharani Narasimha Temple, this cave temple is excavated in a 300m tunnel under the Manichoola hill range. Apart from the main deity idol of Narsimha, there are 2 deities Lord Narasimha and Shiva Linga at the end of the cave which was worshipped by demon Jalasura. It is also believed that the idol of Narasimha is self-manifested and quite powerful. The temple is known for its natural beauty and the devotees will have to walk through the tunnel with the stream of water that comes to the waist level.

Bahamani Tombs is a cluster of 12 tombs of Bahmani Sultans in the same compounds. Artistically built these tombs encompasses large mausoleums beautified with lofty domes, niches, and arches and one of the famous places to visit in Bidar. The tomb of Ahmad Shah-Al-Wali is the most sought-after one out of all the 12 tombs which consist of captivating walls engraved with verses from the Quran written gold. The paintings on the wall are beautiful and mausoleum with a swastika symbol is the main highlight.

Suggested Read: 7 Things To Do In Tumkur That Are Worth Taking A Trip To Karnataka

Chaukhandi of Hazrat Khalil Ullah is one of the prominent historical monuments and best places to visit in Bidar. The walls of the tomb are finished with stucco work and the doorway is adorned with inscriptions of Koranic verses. This tomb features a total of 3 graves in the main vault and a few others in the corridor.

Suggested Read: Shopping In Karnataka: Pamper Yourself And Shop At These 10 Spots In The State!

Barid Shahi Tombs are located in a 55-acre verdant garden of Deccan Park and comprises the tombs of Ali Barid and his son Qasim Barid. Barid Shahis took control over this place at the start of the 15th century. Ali Barid Shah, the most prominent rulers among the Baridshahi loved architecture and constructed this tomb 3 before his death in 1577. Finest examples of Islamic architecture and beauty, this tomb is one of the best places to visit in Bidar. You can find the tomb of Ibrahim Barid Shah which is similar but smaller in size.

Another wonderful creation of ancient architecture and one of the most popular places to visit in Bidar is the Chaubara Clock Tower. Built during the prehistoric period, this building featuring semi-Islamic architecture is no doubt one of the top visiting places in Bidar.

Chaubara means a building that faces all the 4 directions and this 71 feet building having cylindrical structure gives a 360-degree view of the whole city. It was an observation post in the olden days and there is a large clock in at the top of the tower.

Suggested Read: 12 Top Hill Stations In Karnataka In 2020 To Rejuvenate Yourself

One of the most stunning places to see in Bidar, Rangin Mahal is a beautifully structured fort that appeals to all the history and architecture buffs out there. This Fort is a well-preserved complex that was built in the mid-16th century. This Mahal sits close to the Gumbad Gate and features a six-bay hall that has carved wood columns in rectangular form. Each of the columns in this Mahal has intricate and elaborate capitals and carved brackets. The interiors of this Mahal adorn multicolored and beautiful tilework, simply adding to the beauty.

Suggested Read: 8 Best Places To Visit Near Bannerghatta To Unravel The Hidden Gems In Karnataka!

Dedicated to Lord Shiva, the Papnash Temple is one of those places to see in Bidar that are a must-visit. A popular attraction amidst locals and tourists alike, Papnash Shiva Temple is believed to have been home to the shivling that was added by Lord Rama himself on his way back from Lanka. This Shiva Temple has major religious significance attached to itself and witnesses pilgrims visit all year long. The best time to pay a visit to this temple is during Shivratri when the whole city seems bright and vibrant.

11. Solah Khamba Mosque – All Is In The Name

Nothing less than an architectural marvel, Solah Khamba Mosque is one of the most stunning Bidar destinations that makes a trip to this region of Karnataka worthwhile. The name of this structure literally defines how it appears. There are a total of 16 pillars that stand proud in the front of the mosque. Famed as the Zanana Masjid, Solah Khamba Mosque features columns, arches, domes, and sandstone. This is one of the most beautiful pieces of work.

Further Read: 6 Places To Visit Near Bidar For Tourists To Discover Hidden Gems In Karnataka!

Tinted with rich heritage and culture, Bidar is worth visiting once in a lifetime for all the history buffs and art lovers. The architectural legacy and glory of the Bahmani dynasty is exceptional that you can witness. Plan a trip to Karnataka right away as you can find plenty of places to visit in Bidar.

Frequently Asked Questions About Places To Visit In Bidar

Q. What is special in Bidar?

A. Bidar is famous for its rich history, Bidri handicraft products and is considered to be the holiest place for Sikh pilgrimage.

Q. What is the famous food of Bidar?

A. Bidar is a city located in South India and serves South India cuisine, rice is the main core ingredient used in all the dishes. The famous foods available here are idlis, dosas and Vadas.