7 Places You Must Explore In The Wonderful Vellore 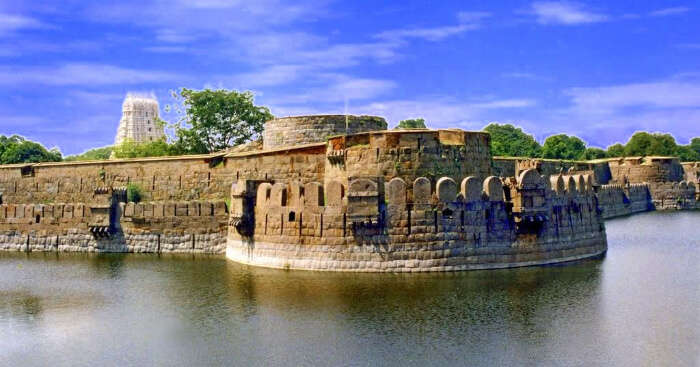 The princely city of Vellore is an ancient city that has been ruled by many prosperous dynasties over the years. The Pallavas, The Cholas, Vijaynagar Kingdom, Carnatic Empire and the British are the various powers that ruled the region of Vellore. Different rulers of Vellore are responsible for the city’s mixed and interesting cultural heritage. The city is famous for its grand forts, royal temples, and natural wonders. Check out these popular and charming places to visit in Vellore.

7 Places to visit in Vellore for tourists

Image Source
This waterfall is located at a distance of 2.5 km from Kaigal village. The waterfall is a natural one and the water comes from a height of 40 feet. The falls are formed by the Kaigal stream, which is one of the two streams flowing through Koundinya Wildlife Sanctuary. Since the area around the forest is dense, gorgeous, and peaceful, it becomes a great picnic spot in the summer season. If you’re looking for places to visit in Vellore with family or friends, Kaigal waterfall is the place for you.

Things to do: picnic, take a dip in the falls, take pictures

A trip to South India has a lot to offer – from tranquillity of forests to charm of sizzling beaches and from lost kingdoms to chills of a hill station. Visit Kerala, Coorg, Ooty, Mysore, or Kodaikanal. Book holiday packages inclusive of airport transfers, cab, resort, sightseeing, and meals.

Image Source
Located inside the Vellore fort complex, the Jalakandeswarar temple is dedicated to Lord Shiva. The temple is built in an extraordinary Dravidian style architecture. It houses a great intricate stone pillar and there are intricate engravings on the ceiling of the temple. Chaitra Poornima (April / May), Mahashivaratri (around Feb), Aadipooram (July/August), Vinayaka Chaturthi (August/September), Navarathri (September/October) are the major festivals celebrated in the temple. If you want to experience the culture of Vellore, this is one of the main tourist places in Vellore to visit for you.

Things to do: worship, walk around the fort

Must Read: 20 Best Tourist Places In Tamil Nadu That Prove That The State Is A Crown Studded With Gems

Image Source
The most amazing feature of this temple is very evident, the gold-coated architecture. This is one of the main tourist places in Vellore. The whole structure is coated in gold leaf and costs a whopping 65 million US dollars. The amount of gold used is 1500 kilograms. Constructed in the year 2007, the temple is built in 100 acres area of land and constructed by Vellore-based Sri Narayani Peedam, headed by spiritual leader Sri Sakthi Amma.

Things to do: explore the temple

Image Source
This is an astronomical observatory and is called the telescope of the city. Located in the midst of a 100-acre forest, this observatory has a 93-inch telescope. One of the great places to visit around Vellore, this also houses India’s largest optical telescope: the 2.3m Vainu Bappu telescope, 1.3-meter J.C Bhattacharya telescope, 1m Carl Zeiss Telescope, and many other smaller ones. Currently, the visitors are not allowed inside due to some renovation work.

Things to do: Observe wildlife, explore telescope, learn about astronomy

Image Source
This is a small but pristine hill station located in Vellore. Yelagiri is located at an altitude of 1410 metres. One can see flowery meadows, tea estates, and orchards as well. One of the great places to visit around Vellore, there are many lakes and waterfalls here. If you want to go a level ahead, you can try paragliding and rock climbing as well. It’s one of the great places to visit in Vellore.

Image Source
One of the most important historical monuments in Tamil Nadu, the Delhi Gate was used to function as an entrance of the 18th-century fort built by Daulat Khan Panni, a governor of the Mughal Empire. A number of historical battles have been done here like the most famous Seige of Arcot, led by the famous British officer Robert Clive. It’s one of the best places to see in Vellore for history buffs.

Things to do: exploring the area

Image Source
One of the top tourist places in Vellore, the Vellore Fort is a must-visit. Located at a distance of 1.5 km from the main railway station, this fort is a 16th-century granite fort located in the heart of the town. It is surrounded by a deep moat that was once full of crocodiles. The fort spreads over an area of 133 acres. There’s a boating facility available here too.

Things to do: boating, visiting the museum, walking around the fort

Vellore being the princely state, it’s wonderfully endowed with a lot of riches. Have you been there? Let us know what more is there to see

Further Read: Off To Kodaikanal? Here’s A List Of 12 Places You Must Not Skip

Frequently Asked Questions About Places To Visit In Vellore

Q. Which are the best places to visit in Vellore?

A. Some of the top places to visit in Vellore are Vellore Fort, Vainu Bappu Observatory, Srilakshmi Golden Temple, and St. John Church.

A. Chinna Bommi Reddy along with Thimma Reddy Nayak built the famous Vellore Fort in 1566 AD and it still stands strong. It is now one of the top tourist attractions in Vellore.

Q. How do I get to Golden Temple from the Vellore bus stand?

A. There are several ways to reach Golden Temple form the Vellore bus stand and they are very cheap options. You can either sharing auto which will take INR 10 or INR 20 or you can take a seat in the bus for INR 5 only.

Q. Is Vellore a good place to live?

A. The town of Vellore is tucked in Tamil Nadu amidst greenery and natural beauty which makes it one of the quaint places to live in.

A. Jalakandeswarar Temple was constructed during the reign of the Vijayanagaram King Sadasivadeva Maharaya (1540 – 1572 AD). You will also find a statue of Sri Akhilandeshwari Amma who was the consort of Jalakandeswarar.

Q. How the name Vellore came?

A. Vellore got its name from the weapon of Murugan or Velayudayaan, a Hindu deity. Vel + uur literally translated into the City of Spears in Tamil language.

Q. Does Vellore have an airport?

A. Earlier, there were no airports in Vellore but with government plans, it now equipped with an airport.

Q. How can I reach Vellore?

A. One of the best ways to reach Vellore is by taking a flight to Chennai and then take a bus to Vellore.

Top Things To Do In Dharamshala: A Mix Bag Of 22 Popular And Offbeat Activities

Beyond Bali: 18 Places To Visit In Indonesia For Honeymoon In 2020

Goa Carnival 2020 Is Here To Make You Go Bonkers