9 Russian Lakes That Can Be Visited For A Refreshing Day Out In The Snowyland! 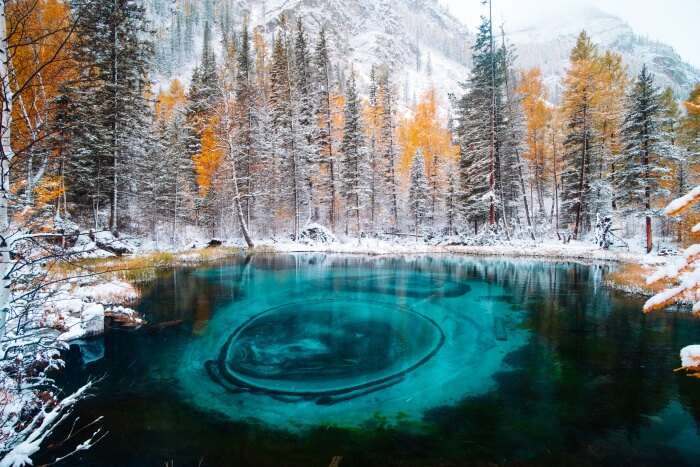 As the lakes dominated numbers within the land of Russia, fishing has become a common pastime among the people. In this list, there are some of the biggest and famous Russian lakes. Let’s get a look at them.It has been observed that more than 2 million lakes are found in the territory of Russia. While some of the lakes are very big in size most of them are small. In this article, a short and brief list of lakes of Russia has been tried to sum up.

Four of the nation’s five longest waterways—the Ob-Irtysh, Amur, Lena, and Yenisey—are in Siberia. Everything except the Amur stream northward into the Arctic Ocean. The longest European stream is the Volga, which streams southward into the Caspian Sea.

This lake is titled as the largest lake in the territory of Eurasia and also holds the name for being the deepest lake in the world. It is speculated that almost all the rivers will need at least one year to fill l is a vast water body. Lake Baikal is also famous for its surrounding heavenly beauty. Very few lakes in the world have the disadvantage to offer to their visitors. In the winter this leg gets frozen completely and the layer of ice is so thick that the railway of trans-Siberian used to take this path.

If we talk about the surrounding then in summer you will get to see a riot of colors from the wildflowers that bloom on the shores. During this season the water turns into a very rich blue color which compliments the entire scenery. It nurtures the biodiversity which is the numerous species of plants and animals which sustain by the help of this lake and the forest encircling it. In the year 1992, this region was termed as a National Park, so if you are planning for a nice day out what can be a better choice than this?

Location: In the North Western parts close to Saint Petersburg

The shows of the lake in the north region are very high in altitude and is full of rocks. Which part of the lakes basin is called as Ladoga of Karelia? It will be very obvious to ask how many lakes in Russia I have so many lakes and rivers in its basin like in Ladka. Historically it has been recorded that Ladoga lake was connected with the was Baltic Sea. If you talk about the biodiversity of the water body, then scientifically it has been proven that it consists of 48 different species of fishes. Out of them at least 25 species have high values in the commercial market.

This lake is the second largest in the whole of Europe. The lake has got its origin from a Glacier, it is the present look of Awaz water body which was there in the Ice Age. The biodiversity which is the banks of the lake is spectacular as it includes a vast virgin forest that consists of loss of species of animals and plants. The animals which can be spotted in this area are a wolf, Fox, squirrel, brown bear, lynx, elk, and even hare. Among the 45 species of fishes found in this water, the most important are white fishes, Brown Trout, wels catfish, European Cisco, silver bream, common dace, pike, and many more.

Location: on the border of China and Russia.

Beautiful Lake gets its water source from a total number of 13 rivers from which it comes from the land of China. The lake is the source to the only river named Songacha. The banks of the lake are very much famous because it is a home for rarely found Chinese soft-shelled turtles. Among the mammals, on the lands, Smurf tiger, Siberian Roe deer, and red wolf are commonly located. The lake is enlisted in the ‘ World Biosphere Reserves’ (UNESCO) in the year 2005.

Location: Mostly in Russia and some parts in Estonia

Unlike most other leagues this water body has considerably less amount of pollutants in it. However, this does not help in any kind of cultivation as the lake is full of algae plants which decreases the clarity of the water. The lake has almost 45 different species of fishes living in it and most popular among them are whitefish, whitebait, bream perch, like and many more. The surrounding area of the lake is also a home for many swallows, and even for those migratory birds who come from the White Sea to Baltic Ocean.

Lake Taymyr is situated in the Krasnoyarsk district on the Taymyr Peninsula. It is the most northerly lake on the planet. The greater part of the year, the lake is secured with ice. The show of this lake is very smooth and it is surrounded by hills. These Hills contain some of the densest Pine forests in the world. You can and locate a total number of 30 islands within the water of the lake. It holds an important position in the Russian lakes map.

Lake Chany is a salt lake situated in the Novosibirsk area. Lake Chany is one of Russia’s most notable lakes. The region of ​​the lake, as indicated by an assortment of sources, fluctuates from 1400 to 2000 square kilometers, and its most extreme profundity is 7 meters. It has for some time been about these lake legends, one of which says that a tremendous snake eating up man and brute lives in this lake. Located amidst the glaciers this lake conjures a very beautiful scenario to its visitors.

This lake is situated in Vologda district. The lake can change, for the most part, because of the low shores, and be around 1,284 square kilometers. The normal profundity of White Lake is around 5-7 meters, but since some of the submerged wells might be as deep as 10-12 meters. Lake White is home to around 29 types of fish, making it a “heaven” for fishermen. Lake White is of incredible verifiable significance as individuals have settled around it for almost 6000 years.

One of Russia’s most seasoned lakes is Lake Nero which is evaluated to be somewhere around 500,000 years of age and is arranged in Yaroslavl Oblast. The lake draws its name from the Merya clan who lived along its southern shores, and they named it Nero on account of the tremendous amounts of sediment inside it. Lake Nero is popular for two islands inside the lake, Lvovsky, and Gorodskoj. A waterway had been built to associate Lake Beloye and Lake Velikoye, be that as it may, in 2009, the channel was totally secured. In 1974, Lake Beloye accomplished the status of nature landmark.

There are a countless number of Russian lakes and rivers if you are very excited about visiting all of them, it is time you book a trip to Russia . The biodiversity of these lakes gets a lot of admiration and complement, which makes them a must-visit.

Are lakes in Russia found frozen during the winter season?

Yes, most of the lakes in Russia are found frozen during the winter season. Only a few of the frozen lakes in winter are accessible by tourists.

Why are most of the lakes not tourist attractions in Russia?

Most of the Russian lakes in the Northern territory face extreme cold conditions throughout the year. This is why they are not accessible and not important lakes to visit by tourists.

Is it safe to swim in Lake Baikal in Russia?

Lake Baikal is the deepest lake in this world. The lake water is shallow and warm here which is why it is unfit to swim in this lake.

How safe are the lakes in Russia?

Most of the lakes are deep and with saltwater. A few of them are sometimes in semi-frozen conditions. Those lakes are not fit for water sporting and recreational activities.

What types of lakes are there in Russia?

What is the popular recreational activity to do in the lakes of Russia?

Angling and ice fishing are the popular recreational activities to do in the lakes of Russia.

Is it possible to do ice skating on Lake Baikal?

Yes, you can do ice skating during the winter season on lake Baikal. This will be a different experience, as you will skate on crystal clear ice.