Shravanabelagola Temples: A List Of Basadis That You Ought To Visit In 2021! 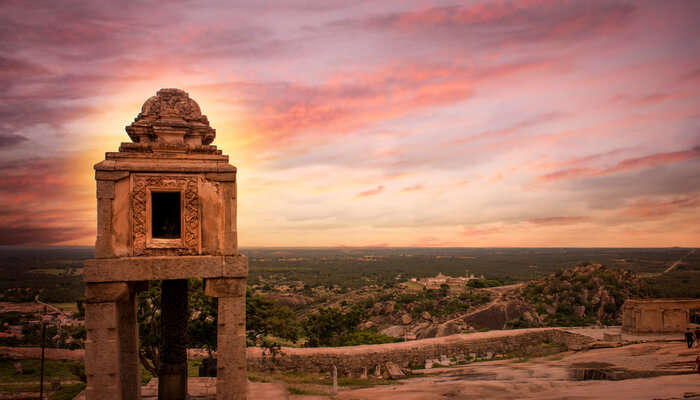 Shravanabelagola is a tourist-thronged city nestled between the Chandragiri and Vindhyagiri hills. The city is of immense importance due to the presence of many temples which makes it a pilgrimage destination for a lot of people. Shravanabelagola temples are situated on the base of the two hills and are Jain centric. These temples are called as the ‘Basadis’ by the locals and its architectural styles have been inspired by various dynasties. Shravanabelagola temples’ history includes numerous inscriptions and incidents connected with great saints and disciples of the Jain religion. So, here is a list of the temples that you should keep in mind for the next ‘Teerth Yatra’.

Chandragiri and Vindhyagiri hills house the various Basadis in Shravanabelagola. The hills are also home to the locals because of its great agricultural capabilities. However, even though Chandragiri hills are smaller in size compared to Vindhyagiri, most of the temples are situated on the latter. It is important to understand that each and every Basadi has a unique story and way of architecture attached to them ranging from Shravanabelagola temples’ steps to the history behind each of those walls.

Akkana Basadi can be translated to mean ‘elder sister’ and is one of the main temples of Shravanabelagola. The temple was constructed by a devout Jain lady, Achala Devi, during the Hoysala period. This Basadi is made of soapstone material which was prominently used to make various buildings in that era. Akkana Basadi has the most magnificent statue of Lord Parshwanath and has a simple and single shrine that houses the sculpture of the saint with his attendants. The dome-like structure of this temple is fondly referred to as the ‘nose of the temple’ because of its unusual and different frame. The temple is one of the favorite Basadis of the locals because of its silent yet calming atmosphere.

Must Read: 10 Temples In Karnataka That Are All About Grandeur That You Must Visit In 2021!

Shantinatha Basadi is a place of immense spiritual and historic value. The temple has Kannada inscriptions written on the base of Shantinatha’s statue. It was built by one of the ministers in the Hoysala period, however, the temple also has few architectural edges inspired by the Chalukyas. The Basadi is a place that provides its devotees spiritual peace because of its not-so-crowded and simple design. The walls may seem bare but its lintels have engravings of Jain monks which makes this temple a must-visit.

As the name suggests this temple was built in memory of the great Chandragupta Maurya by his grandson King Ashoka. The temple has 2 cells standing in a row with an ornamental door at the entrance. The screens on both sides of the Basadi, depict various instances from the life of Bhadrabahu and Chandragupta making it a place of divine intercession for many devotees. The temple is one of the smaller basadis on the Chandragiri hills and is one of the first places that come into sight within a few steps of touring the hillside.

Kambadahalli is also known as the Panchakuta Basadi. The name is derived from the word ‘kambha’ that supports the Basadi’s structure and design. The temple is dedicated to Adinatha, Neminatha, and Shanthinatha. If you do make a stop at this temple, try striking a coin on different areas of the Mahaveera statue and notice how a different sound is produced each time you change your hitting point. The Basadi has three different shrines filled with carvings of flowers and animals.

Bahubali Gomateshwara Temple is famous for its 58 feet tall monolithic statue of Lord Bahubali. The entrance to this temple starts with climbing 620 steps and a decorated door to the temple. This Basadi is also known for the Mahamastakabhishekam festival that it holds once in every 12 years. During the festival, the devotees pour curd, kesar, and sugar on the statue. This temple can be located on the Vindhyagiri hills and can be reached by dolis stationed at the base area of the hillside. Bahubali Gomateshwara is a must-visit for because of its uniquely styled figurines and architecture. You can also find another religious site, the Hanuman temple, with a very tall statue towering over its viewers.

Suggested Read: 12 Hill Stations In Karnataka In 2021 To Rejuvenate Yourself

This 14th-century temple is one of the very few temples on the Vindhyagiri hills. The temple is supported by slanting stone pillars that causes it to be in an elevated position. This basadi is known for its commanding posture and unique shrines. The statues are carved out of black marble stones with amazing backgrounds. The temple conducts regular poojas and provides a serene atmosphere for devotees with troubles and struggles.

Suggested Read: 8 Haunted Places In Karnataka: Are You Ready To Challenge Your Soul?

The Chennanna basadi is a small shrine with an image of the Chandraprabha, 8th Jain Tirthankara engraved in the boulders. It has a hall with numerous pillars. The temple comes into view while on your way to the Gomateshwara temple and also shows a panoramic view of Shravanabelagola. It may be a small shrine but its inscriptions and carvings let you know the amazing history of the Jain saints. Do stop and seek blessings while on your way to the Bahubali temple and tap into the spiritual state of mind by offering prayers to Chandraprabhu Tirthankar.

Further Read: 12 Stunning Places To Visit In Summer In Karnataka For A Relaxing Retreat In 2021

What makes the Shravanabelagola temples such a popular tourist attraction is that all the Basadis are maintained properly by the locals and hold great importance spiritually and some of them are also put under the list of state protection. The temples are rich in history, tradition, inscriptions and beautifully carved statues. Some of these Basadis also date back to the 10th century and beyond. The ancient Shravanabelagola temples should definitely be in your bucket list. So, plan a trip to Karnataka with TravelTriangle, and bring along your friends and family to experience the amazing spiritual aura of this beautiful city.

Nightlife In Pondicherry: 5 Underrated Yet Super Cool Experiences To Try In 2022

12 Best Things To Do In Matheran In 2022 For The Thrill Seekers & Peace Lovers!