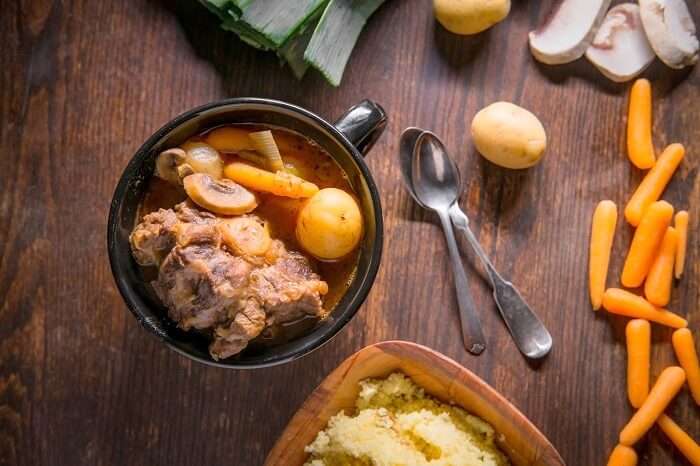 Moving ahead from the scenic beauty and marvelous beauty of South Africa, the country also tops the arena of having the most affordable street food. A foodie traveler can find delicious and ready to eat food at every corner of the South African cities which are not only good in taste but also pocket-friendly.

9 Dishes That Gets The Best Of South Africa Street Food

Here are some of the most delicious and popular South Africa street food which you must have, if you’re a foodie by heart.

This is a very popular dish of South Africa and is loved by every local. This is not only a known street snack but is also included in the native foods of South Africa. A combination of bread and curry , this dish originated in the Durban Indian community and has made its way too many parts of South Africa, which is popularly known as bunny and can be found in some Indian restaurants in Cape Town.

This street food is also known as Vetkoek which is one of the famous street food in South Africa. You can easily spot a Vetkoek stall as it is almost at every street corner. There are many options through which you can choose your favorite Amagwinya.

Must Read: Over 1 Lakh Indian Travelers Are Expected To Visit South Africa In 2022. Are You One Of Them?

The name walkie talkie refers to the chicken head and chicken feet which South Africans consider as a very delicious street delicacy. It comes in two forms i.e. boiled or braaied where both of them are fried and seasoned very nicely. The dish may not look that appetizing but once you try it you won’t be able to stop yourself.

Suggested Read: 15 Best Festivals In South Africa For Witnessing The True Colors Of The Country

Popular as Durban street food snacks, this street snack is loved by the locals and the teenagers. Stuffed with mutton curry and cheese this mouthwatering dish is a local hangover dish. Though there are limited branches of this one place i.e. Johnny’s Roti but it is in popular places like Durban and Mowbray.

This dish is a sheep’s head but once you eat that juicy meat then you will love this weird looking dish. When the butchers would get the great or prime meat during the apartheid and the residents had to settle for the heads of the animals. This way the residents came up with smiley. The sheep heads are boiled and the fur is removed using metal rods. The meat is really tender and people devour it with bare hands. There are plenty of stalls in South Africa but you won’t find these on western menus.

Suggested Read: 16 South African Desserts That’ll Let You Explore The Sweet Side Of The Country

A popular food in South Africa and was not only originated in South Africa but also in Zimbabwe. To qualify as Boerewors the dish must have at least 90% of meat. It is thicker than a sausage and is known to be derived from a type of sausage made in the south of Ardour River in France. It is made up of beef mince and also has coriander, cloves and nutmeg added to it.

This is considered to be a staple food in South Africa and was originated in Zimbabwe, Namibia and South Africa. A salty dried piece of beef or kudu but sometimes can be of an ostrich or a rhino. The name is derived from the Dutch language where ‘bil’ means rump and ‘tong’ means tongue. If you eat it then it tastes like coriander, vinegar, black pepper and raw meat. Many stalls also sell soups and stews with biltong.

This dish is like a type of bunny chow or a cousin of bunny. It is a blue collar basic. This staple food of petrol stations is a quarter loaf of bread that has hot chips topped on it. They also have Vienna and polony topped with tomato sauce added to it. This street food is not that familiar but one should have this as it is a part of the street food cuisine.

This is another great street food which is delicious and stomach filling. It is a kind of hot dog but it only looks like one. This roll is a white bread with sausage, tomato sauce and fried onions topped on it. This staple South African food is enjoyed on a great evening with family or friends.

Further Read: From Running A Marathon To Jumping Off From The Highest Bungee Jumping Spot In The World, He Did It All In His South Africa Trip!

All the hardcore foodies out there, if a South African holiday is in your mind then don’t miss out these scrumptious street delicacies. While you plan on savouring these dishes, you can also book one of the Africa holiday packages with TravelTriangle!

What are the most famous South African street food in the world?

Several items in South Africa are pretty popular in the world. Especially the street food items are quite famous. Some of them are Bunny Chao, Walkie Talkie, Jhonny’s Roti, Smiley, Boerewors, Biltong, and many more.

What are some of the Indian origin dishes that are popular in South Africa?

South Africa is influenced by Indian cuisine a lot. That is why so many street food dishes over there are Indian. Some of them are Bunny Chao, Jhonny’s Roti, Kota, and many more.

Where can one find the famous street food in South Africa?

You will find street food items in several parts of South Africa. But some of the most popular places that are famous for street food dishes are Durban, Mowbray, Streets in South Africa, and many more.

Where can one find Jhonny’s Roti in South Africa?

Jhonny’s Roti is a popular dish in South Africa that is influenced by Indian cuisine quite heavily. It can be found in places like Durban.

What are some of the South African street food items that are quite odd?

South Africans enjoy some quite unusual food items. Some of them are Smiley, Biltong, Boerewors, and many more.

When is the perfect time to visit South Africa?

South Africa has amazing weather all year round. But the right time to go there is between May to October. You will be able to explore the place quite comfortably.

How many days are enough for exploring South Africa?

You can explore the entirety of South Africa within twelve days. If you do not have much time, you can even cover the place within eight days.

A Comprehensive Mozambique Travel Guide: When To Visit And Where To Go

Hostels In Stellenbosch: 5 Places For A Budget-Friendly Yet Comfortable Stay