14 Temples In Bhutan: Symbols Of Traditional Architecture And Spirituality 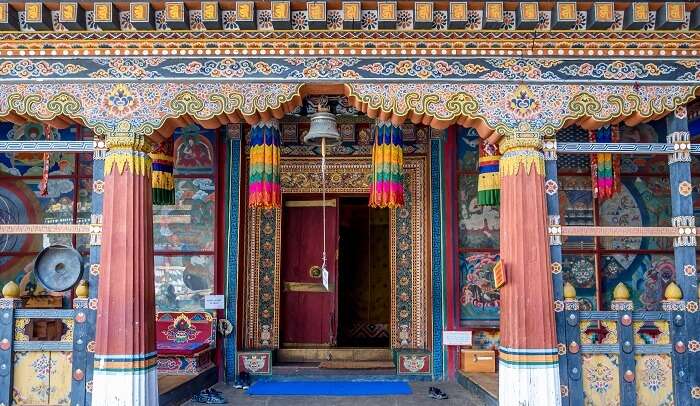 The Himalayan tiny nation, Bhutan is a very unique country. It offers you immense opportunities to immerse yourself in the activities that connect to its rich nature and culture. Some of the best places for such experiences are the temples in Bhutan. Not just breathtaking natural beauty, Bhutan also owns several marvellous Buddhist temples and monasteries. Take a look at some of the most popular temples in the country to fall in love with their architectural charm and peaceful vibe.

It’s time to plan a trip to Bhutan on vacation. Here is a list of some of the most popular temples in Bhutan which you shouldn’t miss during your trip.

It is one of the oldest temples in Bhutan that was built by a Tibetan King Songsten Gempo in the 7th century. It is believed that this is one among the 108 temples that were constructed by him to subdue a demon. It houses many important relics including a 7th-century statue. It is said that this statue was made at the same time as its famous counterpart in Lhasa, Tibet.

Nearby Attractions: Paro Taktsang, Haa Valley, Rinpung Dzong, National Museum of Bhutan.
Location: Paro, Bhutan
How to Reach: A cab can be hired from any part of Paro to reach the Kyichu Lhakhang in Paro.
Entry Fee: No fee is applicable.

Must Read: 10 Invigorating Adventure Sports In Bhutan You Must Try In 2021

Jambay Lhakhang is also among the 108 temples which were built by the Tibetan King, Songsten Goenpo in 659 AD. The stories go on that a demoness was causing hindrance to the spreading of Buddhism in the region. So, more than a hundred temples were constructed across Tibet, Bhutan and the bordering lands as believed to be on her body parts.

Key Attractions: Jambay Lhakhang Festival, Bumthang Cultural Trek, Kurje Lhakhang, Bumthang Valley
Location: Paro, Bhutan
How to Reach: You can easily reach here by flying from Paro to Bumthang by air. Roadways facilitate easy commuting from each nook and corner of the country.
Entry Fee: No fee is applicable.

Suggested Read: Visit These 25 Tourist Places In Bhutan In 2021 To Change Your Worldview

Jokhang Temple is one more important Buddhist temple in Bhutan that welcomes devotees from across the world. Located in the heart of the city, Jokhang Temple’s main highlight is its elaborate Buddhist décor. Photography is strictly prohibited here. Even more interesting is the crowd of the Buddhist devotees prostrating themselves repeatedly outside this temple.

There is a common belief that a trip to Bhutan will perhaps remain incomplete without visiting the Tiger’s Nest where one of the most famous temples in Bhutan welcomes the tourists and devotees. It is advised to get trained before doing this climb as it has challenging terrain and the air is thin due to its altitude.

Key Attractions: Kyichu Lhakhang, Drukgyel Dzong, Bhutan Grace Travels
Location: Taktsang Trail, Paro 11001, Bhutan
Places to Stay: Tatsang Boutique Resort and Spa, Tiger Nest Resort, Tenzinling Resort.
How to Reach: No vehicle is allowed till the doorstep and neither are the roads navigable. The nearest point you can travel by car is Paro.
Entry Fee: INR 500/-.

The Tango Monastery is located inside a cave and is amongst one of the most popular and famous Buddhist temples in Bhutan. It is surrounded by 6 other temples on the same premises which are Trulku Lhakhang, Choeku Lhakhang, Guru Lhakhang, Longku Lhakhang, Gonkhang and Namsey Lhakhang that make the shrine.

Kurjey Lhakhang Monastery is a large, active and important Temple Complex of Buddhist Temple that comprise of the three temples and which is named after the body (kur) print (jey) of Guru Rinpoche, which is preserved in a cave inside the oldest of the three buildings making up this temple complex. The three temples are Guru Lhakhang, Sangay Lhakhang and the Sampa Lhundrup Lhakhang.

Key Attractions: It is one of the most beautiful and sacred sites in Bumthang. It offers much to explore and to learn about Guru Rinpoche to the culture and tradition of the region besides understanding the faith of the Bhutanese people. Explore various images, statues and elaborate paintings of deities here.

This temple had been built in honour of the great terton Pema Lingpa around the 15th Century. One of the famous temples in Bhutan, it is surrounded by the sites that projected the early Buddhism in Bhutan. The role of this temple in the unification of Bhutan’s various ancient kingdoms is considered noteworthy. Not well visited but it should definitely be on your list of temples to see while you are travelling to Bhutan.

How to Reach: Easiest way to reach this temple to travel to Jakar by Air and from Jakar, you can opt for buses to reach Bumthang.
Entry Fee: No fee is applicable.

The Gangtey Monastery is located on a hill ridge overlooking the vast and beautiful Phobjikha Valley. This monastery was built in the 17th century and it is still considered as the largest Nyingma monastery in Bhutan. It houses a temple in the centre surrounded by the residential quarters for the monks. Architecture and colours used to design this monastery are incredible. The Gangtey Gompa hosts a black-necked crane festival every winter when cranes arrive in Phobjikha Valley. It is believed that they circle the monastery 3 times while they arrive and leave this valley.

Suggested Read: 10 Things To Buy In Bhutan On A Vacation

The Punakha Dzong is one of the most famous and oldest temples in Bhutan. It is said that idols kept in this temple has never been subjected to any damage till date. The temple is about 600 years old and has faced repeated destructions with three major floods and fire incidents. Only the temple floor is open for the tourists. Furthermore, the Mochu River flowing beside this temple makes it all the more beautiful.

Key Attractions: The Suspension Bridge, Samtengang Winter Trek, Punakha Tshechu and Drubchen Festival.
Location: Punakha, Bhutan
Places to Stay: Punakha Residency, The Four Boutique Hotel, Khuru Resort, Zhingkham Resort.
How to Reach: The best way to reach this place is to travel to Punakha by Air through the Bhutanese Paro International Airport. From there you can hire a taxi to Punakha.
Entrance Fees: INR 300/- per person.

Suggested Read: 7 Bhutan Villages That Are Best To Explore The Country Side Of Druk Yul In 2021

The Tashichho Dzong is a magnificent Hindu temple in Bhutan where the king ascends the throne alongside the priests. Tashichho Dzong is situated in a large green area, which also houses numerous ministries. It’s open for visitors during certain times of the day only. You should check it well in advance when you should visit here. This temple mustn’t be missed whenever you are travelling to Bhutan.

Suggested Read: 12 Charming Monasteries In Bhutan Every Traveler Must Explore

Changangkha Lhakhang is considered to be the oldest temple in Bhutan. It is famous as the ‘name-giving temple’ where new-borns are brought by their parents and resident astrologers give an appropriate name to the newly born child based on date and time of birth in the astrological context. The temple sanctum sanctorum has a beautiful 11-headed statue of Lord Avalokiteswara.

Nearby Attractions: Royal Textile Academy of Bhutan, Bhutan Museum.
Location: Thimphu, Nepal
Places to Stay: Khang Residency, The Pema, Bhutan Suites, Osel.
How to Reach: Travel to Paro from anywhere by air and then hire a taxi to reach Thimphu.
Entry Fee: No fee is applicable.

Suggested Read: Haa Valley: A Sweet Spot Tucked In Bhutan And A Must-Visit On The Northeast Trip!

This temple had been built in 1499 to commemorate the Lama Drukpa Kuenley (1455-1529). A very beautiful temple with full of colours and a huge prayer flags fluttering with strong winds, it is here that Bhutanese parents visit the temple for blessings and naming their newborn babies. Likewise, young couples arrive here to get blessings to conceive and have babies. Temple campus is vibrant with the child monks running around.

Suggested Read: Bhutan In December: A Quintessential Travel Guide For An Exquisite 2021 Vacation!

Jangtsa Dumgtseg Lhakhang is a Buddhist temple in western Bhutan. The temple is notable as it is in the form of a Chorten, which is very rare in Bhutan. It is located on the edge of a hill between the Paro Valley and the Dopchari Valley, across the bridge from Paro. The Buddhist iconography depicted is considered a unique repository of the Drukpa Kagyu school here.

Suggested Read: Top 7 Reasons Why Bhutan In September Make A Solid Case For An Autumn Vacation In 2021!

The Royal Bhutan Monastery is simply beautiful, ornate and maintains beautiful 3D paintings on its walls. It is located barely a kilometre from the Mahabodhi Temple in Bhutan. Tengar Monastery is widely visited too and has exquisite and ornate paintings and tapestry from Bhutan to attract visitors. The monastery is open to visitors throughout the day except 12.00 -2.00 PM. You can soak into the prayers that offer you a divine feeling praying in the temple.

Key Attractions: Paintings and Tapestries, 3D Paintings on the walls, Rich Biodiversity nearby.
Location: Paro, Bhutan
Places to Stay: Dharma Lodge, Namsey Chholing Resort, Udumwara Resort, Taktsang Boutique Resort and Spa.
How to Reach: The easiest way is to travel via air to the nearest International Airport at Paro and travel by taxi from there.
Entry Fee: INR 500

Further Read: Backpacking In Bhutan: A Thrilling Experience For All The Travelers

Plan a trip to Bhutan right away and visit all the above listed temples. These Buddhist temples in the country preserve the charm of spirituality and art in them. Go and explore these unique places to enjoy a culture trip in this ‘happy’ nation.

A. No, photography is strictly prohibited in Changangkha Lhakhang.

Q. What is the main attraction of Jangtsa Dumtseg Lhakhang?

A. The Jangtsa Dumtseg Lhakhang comprise of mandalas and depictions of the Tibetan and Indian saints including Guru, Thangtong Gyalpo and Avalokiteshvara.

Q. What is the best time to visit Bhutan?

A. October-December in the ideal time to visit Bhutan because air remains clean and fresh with sunny skies.

Q. How is the weather of Bhutan throughout the year?

A. In Bhutan, the temperatures varies from 28°F to 71°F and does not come below 22°F or above 75°F. The wet season is comfortable and mostly cloudy while the dry season is cool and mostly clear.

Q. What type of clothing must be avoided while visiting temples in Bhutan?

A. Apparels such as short skirts, flip-flops, hats and t-shirts cannot be worn inside the temples in Bhutan.

Q. Is Bhutan a safe country for travelers?

A. Bhutan is a country of temples with almost completely devoid of any crime. And, hence it is a remarkably safe destination.

A. Yes, Indian rupees are widely accepted in Bhutan.