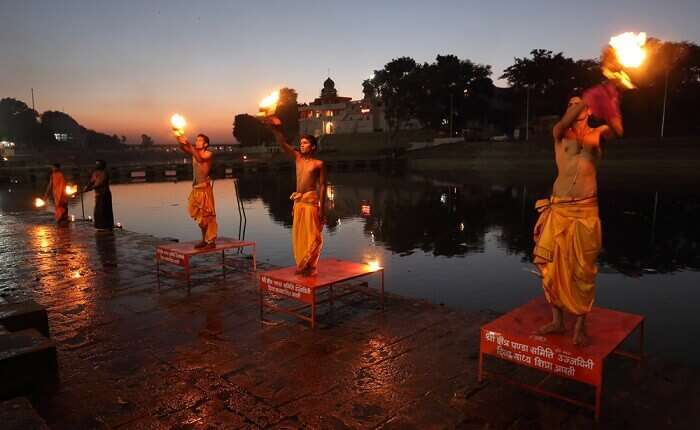 Considered as one of the iconic cities of India, Ujjain encompasses some of the holiest shrines. Be it a spiritual individual or a history buff or an architecture fanatic, the temples in Ujjain will captivate anybody’s mind with its superiority and cultural essence. So, soak yourself in the divine spirit of Madhya Pradesh and enjoy a religious tour with your family.

Ujjain is considered to be an important place of pilgrimage. It is home to many famous temples such as Kal Bhairav temple, Mahakaleshwar Jyotirlinga, Mangalnath Temple and Sandipani Ashram. Check out the complete list of famous Ujjain Mandir.

Mahakaleshwar Temple is one of the most revered temples in Ujjain, dedicated to Lord Shiva, and remains thronged by the Hindu devotees throughout the year. The temple is very popular because of the lingam, which is worshipped as Lord Shiva and is one of the twelve famous Jyotirlingas present in the world. The devotees can witness the Rudra Sagar Lake, flowing beside the temple, and is thus regarded to be a holy place where only the honest ones can set their foot on. Devotees can experience the peace of mind amidst the untouched nature and religious abundance at the Mahakaleshwar Temple in Ujjain.

Must Read: 10 Historical Places In Ujjain For The Spiritual Seeker In You

The Kalabhairava Temple depicts the Tantra culture, which has always been a significant part of Hinduism. The cultural diversity reflected in the legendary fact of the temple takes us back to the time when black magic thrived abundantly. According to the mythological facts, Kal Bhairava of Ujjain is a manifestation of Lord Shiva and is considered to be the most sacred one too. There is also a traditional belief that the bull present in the temple was given as a wedding gift to Lord Shiva and Devi Parvati by King Daksha. A Shivlinga is placed in the middle of the temple, along with the bull, Nandi, who is believed to hear the secret wishes of the devotees and convey them to Lord Shiva. The temple comes to life during the occasion of Maha Shivratri when millions of devotees, embark on the sacred journey.

For those going through a critical stage of life and facing anxiety and tension, a visit to the Chintaman Ganesh Temple is a must. It is a famous temple in Ujjain and hosts a grand idol of Lord Ganesha, which is worshipped at the holy shrine. As the name suggests, “Chintaman” indicates the deity as the assurer, who can free the human mind from the worries and anxieties. Unlike other temples, devotees rush to the temple throughout the year, and the crowd during Wednesdays and Sundays is overwhelming. The major attraction of the temple is its idol, which is believed to have raised on its own from the ground and has thus been never switched or renovated.

Built back in the 19th century, the Harisiddhi Temple is one of the fifty-one Shakti Peethas and dedicated to Goddess Harisiddhi. The serenity that the temple has to offer due to its location by the River Shipra attracts a number of tourists from all over the world. According to the legendary fact, one of Sati’s body parts fell at the spot when Vishnu released his ‘chakra’ and cut it into pieces to stop Lord Shiva from doing the Tandav. Among all the other body parts, Sati’s elbow was found at the spot of the temple, where, later, the famous King Vikramaditya built the temple. The temple pays homage to three more goddesses along with Goddess Harisiddhi, namely Annapurna, Mahasaraswati, and Mahalakshmi. Apart from its spiritual abundance, the temple also boasts its Maratha style of art with red sandstones, which tend to add a slight touch of grandeur to it.

Located near the Harsiddhi temple, Ram Ghat regards significant legendary facts and marks its popularity because Lord Rama used to come here to bathe in the ghat with his consort, Sita, during the period of exile. The ghat has been listed among the top religious sightseeing in Ujjain. The ghat comprises of a vast area, and thus serves as a location to the Kumbh Mela, which happens only after every twelve years. However, the devotees come here and take a holy dip in the sacred water before entering the temple. It is believed that those who take a dip in the water can wash off their sins and free their souls from the cycle of births, attain salvation, and discover their path of ‘moksha’. Keeping the religious significance aside, you can also visit the temple, sit and relax while witnessing the mesmerizing sunset view.

If you are someone who is already tired of being in the midst of chaos, then the peaceful ambiance and serenity of the place are going to soothe your senses. Surrounded by lush green bushes in Sandipani Ashram, Gomti Kund is a sacred water-tank, which is believed to be poured in with waters from all the sacred places in the world. There is a common belief that Lord Krishna did so to save the efforts of His guru, Sandipani. However, the Kund is still used as the primary water source in the whole ashrama. Besides the legendary fact, the temple also bears great references to enrich yourself with the Vedas and Puranas. It is also considered one of the wonderful picnic spots near Ujjain.

Dating back to the 19th century, the Dwarkadhish Gopal Mandir is a temple dedicated to the child avatar of Lord Krishna. The temple marks huge architectural significance and resembles the style of Maratha architecture. Dwarikadhish Gopal Mandir follows a marble-spired structure because the ones who built it belonged to the Maratha culture. It was built by the wife of the Maratha King Daulatrao Shinde named, Balaji Shinde who is said to have received a dream to construct the temple and circulate the word of religiosity among people. The idol worshipped here is a 2-feet statue of Lord Krishna, settled on the altar layered with marble, and bordered by intricate silver platings. Along with that, the devotees can also worship the idols of Garuda, Lord Shiva, and Parvati. The temple also bears a robust historical existence as it’s doors were stolen by the invader, Mahmud of Ghazni, but later, it was restored by a Maratha ruler, Mahadji Shinde.

Constructed in 17th century by Mirza Raja Jaisingh, Shree Ram Janardan Mandir is a temple of Shree Ram and Janardan. It is one of the oldest Ujjain Mandir and is a perfect example of Maratha architecture with mindblowing Maratha paintings and sculptures. The paintings inside the complex portrays scenes from life of Ram and Krishna. All these paintings on the walls add to the charm of the temple and attracts not only pilgrims but also casual visitors from all over the country throughout the year.

Suggested Read: 8 Places Near Ujjain That Will Excite You And Enhance Your Travel Experience

Mangalnath Temple is amongst the most visited Hindu temple in the city. Situated far away from the hustle and bustle of the city, it is visited by devotees in large numbers on a daily basis. It is the only temple dedicated to Mangal and is considered to be one of the most active temples in the city. People who have a weak Mangal visit the temple on a regular basis to conduct Mangal Shaanti Puja.

Further Read: 10 Places To Visit In Ujjain On Your Spiritual Journey

If you are someone who is seeking spiritual fulfillment, do not miss the opportunity to explore the temples in Ujjain. These temples, with abundant cultural and religious resources, appeal peace of mind and calmness of the soul on your trip to Madhya Pradesh!

Frequently Asked Questions About visit the temples of Ujjain

Q. Which one is identified as the best temple in Ujjain?

A. The Mahakal Temple of Ujjain is the best one in Ujjain because of its religious superiority.

Q. When should I visit the temples in Ujjain?

A. Ujjain, being a part of Madhya Pradesh, the preset of the winter season is the best time to explore the temples in Ujjain because the weather remains quite bright and pleasant during the day.

Q. Which is the ideal temple for traditional and cultural knowledge?

A. The Ujjain Mahakal Temple is the ideal temple for the tourists to derive historical and cultural information.

20 Temples In Karnataka That Are All About Grandeur That You Must Visit In 2021!