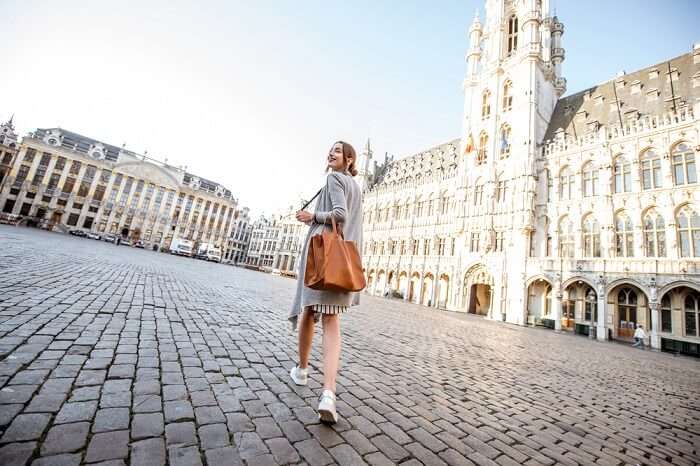 Brussels is an amazing city boasting of stunning architecture and intriguing history, present in every fragment of the city. The capital of Belgium, this city is very corporate and bureaucracy oriented. It is this multifaceted ambiance that has something to offer for everyone, which makes it one of the best cities in Belgium.

Things to do in Brussels

Here is a list of some of the most spectacular things to do in Brussels city to have one of the best times of your life. Take a look!

A UNESCO World Heritage Site, the Grand Place is the most admired tourist attraction of the city. Situated in the centre of the city, you are sure to be left awestruck when you visit this beautiful place. A 15th Century city hall will also manage to impress you with its six guild halls and exquisite architecture. A flower market in the square is worth visiting, especially at night.

Must Read: Iceland In December: 15 Experiences For Having The Best 2020 Winter Vacay Ever!

King Leopold in the late 19th century planned the park. This park is a great place to visit for a number of reasons. Home to impeccable monuments that like the Triumphal Arch, Exposition Halls and the Bordiau Halls, the Parc Du Cinquantenaire should definitely be part of your tour plans when you visit Belgium. The museums here consist of thousands of fantastic and interesting artifacts.

Not as famous and popular as the other aspects of Brussels history, but the comic book history of Brussels is actually very intriguing. With a museum named The Belgian Comic Strip Centre dedicated solely to comics, you will realize how important comics are to the city and its people. There are also six surprising and amazing cartoon murals painted around the city that were commissioned by the city.

Beer plays a significant role in the city’s culture and history, and is the reason why Belgians are really proud of their Beer. There are tours available that allow beer lovers to experience the best places serving beer in the city. It also helps people learn about the history of the beer while also getting to know how it is actually made. Even if you are not a beer fan, this tour is worth taking for the historical aspect associated with it.

Also named as the Oldest Citizen of Brussels, this bronze statue of a little boy and a fountain designed by Jerome Duquesnoy, is a familiar and popular character in the city. Built in 1619, it is the most photographed statue in the city that showcases a small boy literally pissing. Usually naked, the boy also gets dressed sometimes. This 60 cm high statue is sure to tickle your funny bones.

Suggested Read: An All-Paid Trip To Iceland For 3 Months! This Summer Wow Air Is Offering The Coolest Job Ever

Dedicated to telling the history of Brussels, this is a great museum that is situated near the Town Hall. The history of the city is beautifully explained throughout the three floors of the Museum. With details right from the Middle Ages to the present, this Museum covers every important aspect related to the city and gives all the necessary information. It also contains the numerous costumes of the famous Manneken Pis.

Notre Dame Du Salon is an amazing Gothic cathedral, initially used as a chapel by the Archer’s Guild, came into existence way back in the 14th Century. The famous Madonna statue here, supposed to have healing powers, was allegedly stolen by a husband and wife. With its popularity and fame, the Notre Dame Du Sablon has managed to attain a dominating position at the Sablon Square in Brussels.

One of the oldest crafts in Brussels, Lace as well as the art of needlepoint lace was one of the most significant industries in the city back then. The museum displays a number of lace outfits while also showcasing large quantities of historical outfits. There are various exhibitions held here that present attractive, fascinating outfits.

This amazing building was earlier, a department store and was built in the 19th Century. Its stunning façade, as well as its interesting and vast musical museums, have managed to attract tourists from all over the world over the years. Consisting of over 2000 musical instruments, the museums explain the historic value of these instruments while also giving guests a chance to listen to them. There is also a café on the roof of the building that is known for serving both, great food and breathtaking views.

Extremely popular with locals as well as tourists, Café Belga is a great place most people like hanging out at, after a tiring day of sightseeing. Situated at the heart of Place Flagey, the cafe exhibits a lovely ambience and serves one of the best Belgian cafe food. Although very busy in the summer, it is still something one cannot miss at all just for the positivity and liveliness it imparts.

These are the things that help you explore Brussels’ history, whilst also helping you engage in exciting and interesting activities. So, plan a trip to Brussels and these are the things you must do on your trip, to understand the city’s culture in a better way while also giving you a better understanding and experience.

Frequently Asked Questions About Things To Do In Brussels

Q. What is there to do in Brussels?

A. There are many things to do in Brussels which includes exploring the Grand Place and the Old England Building. Alongside that people can also explore the Brussel’s Notre Dame Du Sablon. Also take a glimpse of the Palais Royal and enjoy the Manneken.

Q. How many days are enough in Brussels?

A. To explore the beautiful streets and other magnificent architectures in Brussels, at least 3-4 days are required. During this time, people can enjoy the view of the capital city and its neighbouring towns.

Q. What is there to do in Brussels for free?

A. People can do some things for free which includes taking a walking tour of Brussels, or go green in a park. Alongside that people can take a religious tour of Brussels Churches or take a tour of the Palais du Justice.

Q. What is there to do in Brussels in the winter?

A. There are many things to do in Brussels in the winter which includes taking a tour of the Christmas Markets at Grand Place. Explore the MIM Museum and Restaurant and explore the Atomium.

Q. What is there to do in Brussels in 3 days?

A. If you’re there in Brussels for 3 days then make sure to explore things like Grand Place, Manneken Pis, Notre Dame Sablon, Royal Palace of Brussels and Museums in Brussels.

Q. What to pack when visiting Brussels?

A. When visiting Brussels, make sure to pack things like lightweight packable down jacket, packable rain jacket, sweatshirt or hoodie and an umbrella.

Q. Are museums free in Brussels?

A. Brussels is the city which has many museums and if someone is visiting this place they can explore them for free. Some of the famous museums are the Magritte Museum, the MIM and the Museum of Natural Sciences.

Q. What can teenagers do in Brussels?

A. Some of the fascinating activities which the teenagers can do are and visit are Royal Military Museum, Bowl Factory, Autoworld, Villers Abbey and Musical Instrument Museum.

10 Things To Do In Palampur For An Entertaining Vacay In 2021!

30 Best Things To Do In Ooty That Will Make You Fall For The Hills All Over Again In 2021!

Udaipur Honeymoon 2021: A Rich, Romantic, And A Royal Start To Your Happily Ever After!