10 Best Things To Do In Ujjain: Rejuvenate In The Spiritual City 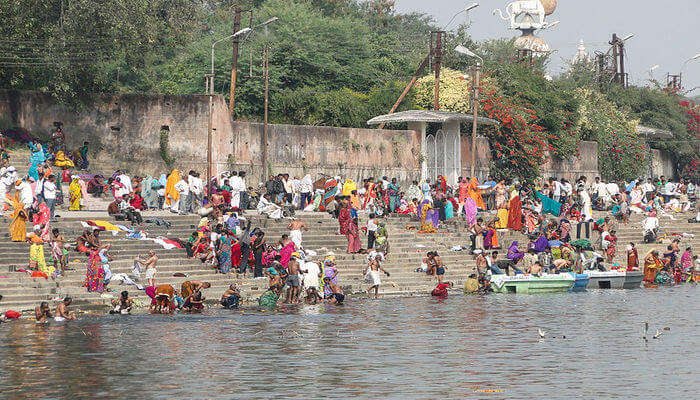 Ujjain is a historical and spiritual city situated near Indore at the banks of Shipra river in Madhya Pradesh. This ancient city is extremely rich with its cultural and eventful history. The city is known for its spiritual vibes and many ancient temples. The most popular temple in the city is Mahakaleshwar Temple – one of the 12 Jyotirlingas of Shiva in the country and one of the most popular pilgrimages in this part of the country. The city ranks in the top 7 most sacred cities in the country.

However, there are many other top things to do in Ujjain that make for an eventful overall vacation to this spiritual city.

Top 10 Things To Do In Ujjain

Here is a list of the top things to do in Ujjain to keep you highly engaged and captivated while travelling to this serene sacred city:

Must Read: 10 Historical Places In Ujjain For The Spiritual Seeker In You

Evening aarti at the banks of Shipra is one of the most ethereal sacred traditions that you can take part in while travelling to this graceful city. The aarti takes place in the evening around sunset on the banks of Shipra. The art is to honor the ancient Shipra river and hence it is also popularly known as Shipra Aarti. It is truly an enchanting experience to experience aarti in an environment filled with chanting of mantras, clanging of temple bells, radiance of oil lamps and an admirable view of the river Shipra.

This is the biggest attraction of Ujjain and among the 12 Jyotirlingas which is considered the most sacred and important pilgrimage in the country. Devotees from everywhere in the country come down to pay their devotion to Lord Shiva in this temple. Situated near Rudra Sagar Lake, this is an enthralling ancient temple. The original temple is said to have been destroyed in an attack in the 13th century. The temple was rebuilt in the 18th century by Ranoji Shinde.

This is a unique museum focussed on religion, arts and sculptures. The riveting museum is home to many angelic and adorable idols of Hindu deities from different eras. You will find the beautifully crafted sculptures of hundreds of different deities at this place. An incredible museum which showcases the rich ancient culture of this land. Apart from idols, you can also expect some very ancient coins and other artifacts. The whole campus is quite beautiful and has been designed with great care. The museum is relatively new and opened for public in the year 2016 by the Government of Madhya Pradesh.

Suggested Read: 33 Best Places To Visit In November In India (2022) Which One Cannot Miss

Ujjain is close to Indore and due to this proximity, Ujjain carries the same enchanting flavours as you get in Indore. You will find a titillating fusion of Maharashtrian, Rajasthani, South Indian and Gujarati food in Ujjain. Street food is amazing with the popular Poha of this region, something that you can only get here along with Indore. Dazzling jalebi, vada pav, bhel puri, hot dogs, spicy chaat, hot samosas are something which will make your stay more adorable here. Market areas around Tower Chowk are most popular among the tourists to get the taste of bewildering street food of this place.

Suggested Read: 25 Places To Visit In Ujjain On Your Spiritual Journey In 2022!

The markets in Ujjain are colourful and very captivating. You can find some extricate local artefacts, textiles and handicraft at this place. Market areas around Gopal Mandir and surrounding Ujjain railway station are among the most popular ones. Do check out the delightful batik printed sarees and other textiles at these markets.

Mahakal Temple in Ujjain is an entrancing temple of lord Shiva. What makes this temple unique and intriguing is the fact the tropic of Cancer passes through this captivating temple. Built with red stone the temple is large and extremely serene. Situated on the banks of sacred Shipra river near the adorable Mangalhat, this temple is perhaps the second most important temple in Ujjain after Mahakaleshwar temple.

An incredible ancient temple dedicated to lord Kaal Bhairav. Situated at Jail Road in Bhairav Garh the temple is famous for its liquor offering to the lord Kaal Bhairav. Surrounding areas are beautiful with the Shipra river flowing nearby. Deity of Kaal Bhairav here is said to be the guardian deity of the city of Ujjain. This ancient temple was once regularly visited by the rulers from Maratha kingdom. The original older temple is said to be extremely ancient and some believe this to be as old as the 9th century CE.

Suggested Read: 4 Mesmerizing Resorts Near Ujjain For A Rejuvenating Weekend In 2022!

Shipra river is amongst the most sacred river in Madhya Pradesh. The riverfront in Ujjain is famous for hosting one of the biggest spiritual extravaganzas of the world – Maha Kumbh Mela which is held here once every 12 years. The river is very significant for its sacredness and religious beliefs. One of the most enchanting and sacred experiences you can have in Ujjain is the sacred divine dip in the waters of this holy river. Ram Ghat is popular amongst the pilgrims to take a bath in the ambrosial Shipra river.

Kaliadeh Palace is a one stunning imposing historical monument in the city of Ujjain. The fantastic piece of architecture which has huge inspirations from Persian architectural design of that time which was built in the mid-15th century. This bewildering palace was built by the Sultan of Mandu. Situated at the banks of Shipra river this palace is one of the most popular historical attractions in Ujjain.

Further Read: Visit These 9 Temples In Ujjain & Soak Yourself In Spirituality In 2022

This enchanting city of Ujjain will surely absorb you in its sacredness and serenity. One of the most popular pilgrimage cities in the country, this little city of temples has a lot to offer to its tourists. The amazing things to do in Ujjain will keep you highly engrossed while you are here. This ambrosial city is the one which will make you want to come here again and again. Plan your trip to this delightful city today!

Frequently Asked Questions About Things To Do In Ujjain

How far is Ujjain from Indore?

Indore is 60 KM far from Ujjain. It will take approximately 1.5 hours of drive to reach Ujjain from Indore.

How far is Bhopal from Ujjain?

Bhopal is approximately 190 km from Ujjain.

What is Ujjain famous for?

Ujjain is one of the most sacred pilgrimage city on the banks of river Shipra.

Is the Ola app available in Ujjain?

Yes. One can hire Ola or Uber cabs in Ujjain.

What is the best time to tour Ujjain?

Winters is the best time to visit Ujjain. Months from October to February are the best to tour this sacred visit.

Which is the nearest airport to reach Ujjain?

Indore’s Devi Ahilyabai Holkar Airport is the nearest airport to the city of Ujjain. Airport is only 55 km away from Ujjain.