10 Wonderful Wildlife In Tanzania To Spot On Your Safari 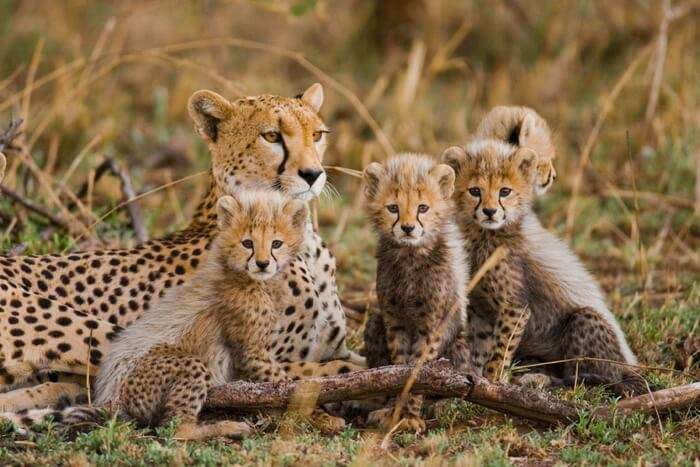 Africa as a continent is blessed with an abundance of birds, wildlife, flora, and cultural history. Each country is known for its varied ecosystem, tribes and natural beauty. It is home to Amazon forest, Mount Kilimanjaro, dark chocolate plantations, coffee plantations, and all things wonderful. Tanzania is one such country in Africa which has one of the best wildlife ecosystems. It has a huge variety of animal and bird species. Apart from this, it is also known for the well-kept national parks and forest reserves that act as nourishing habitats for the wildlife in Tanzania.

10 Kinds Of Tanzania Wildlife To Spot On Your Trip

So, here is a Tanzania animals list that will help you know more about the wildlife in Tanzania. Which ones of these would you like to spot on your tour? 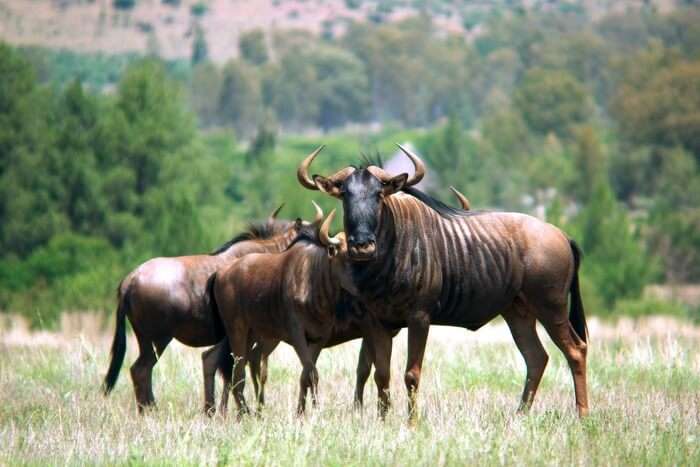 Tanzania is famous for two main animals – Wildebeests and Elephants. The Wildebeests in Tanzania are the main attractions of all the safari tours. If you are looking to spot these rare beasts, you should head to the Serengeti National Park. Each year, these beasts migrate to Serengeti and it is spectacular sight to see. They move across the Mara-Serengeti area.

A Wildebeest looks like cattle with sharp horns, hairy body and a slight hump. The best time to spot this breed of cattle is during the months of June and July. During January and February, the Wildebeests settle down in a particular area for calving season. 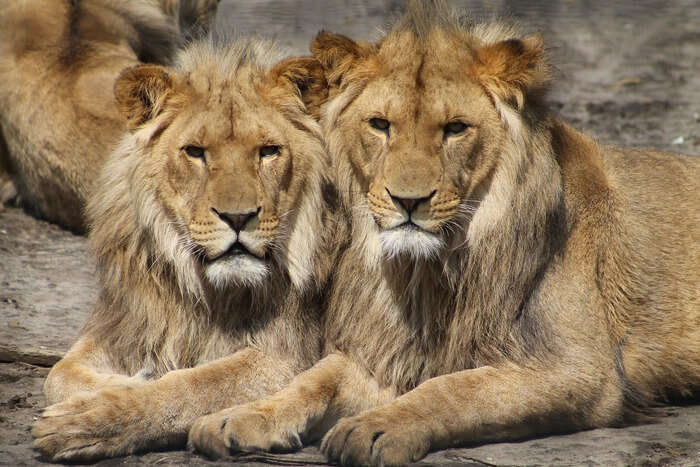 It is quite common to spot lions or other predatory animals in Tanzania wildlife parks. Throughout the year the lions roam the parks in search of prey or shade. Tanzania is known to have a healthy population of lions, lionesses and cubs. On a bright, sunny day you can spot the lions crossing the fields. It is nothing less than thrilling to be so close to the King of the jungle!

However, the best time to spot the predatory animals is during the dry season. During the summer months between April to June, the animals stay near the river banks. This is when you can spot most of them. Apart from lions, you can also spot Leopards and Cheetahs in the national parks. But spotting a Cheetah or a Leopard is quite occasional. 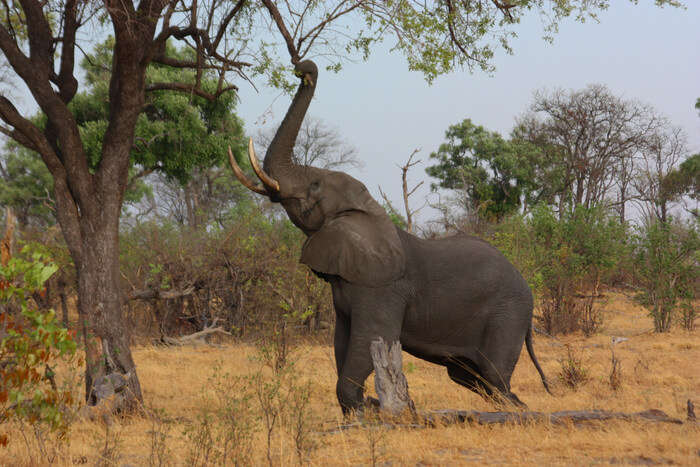 Elephants in Tanzania are a very common sight and a part of the “Big Five” club. Each wildlife park or forest reserve has an abundant population of elephants. The mighty animals are very friendly and usually and are a good sport. Sometimes, during a safari you can even get up close to an elephant. These elephants are usually seen walking in small groups or contained in a particular area. However, if you wish to see the animals in action, then you must wait for the migration season.

The elephants move across the Serengeti area in large herds during the migration season. The best national park to see the elephants in their glory is Tarangire National Park. It is said to have the biggest population of elephants in Tanzania. 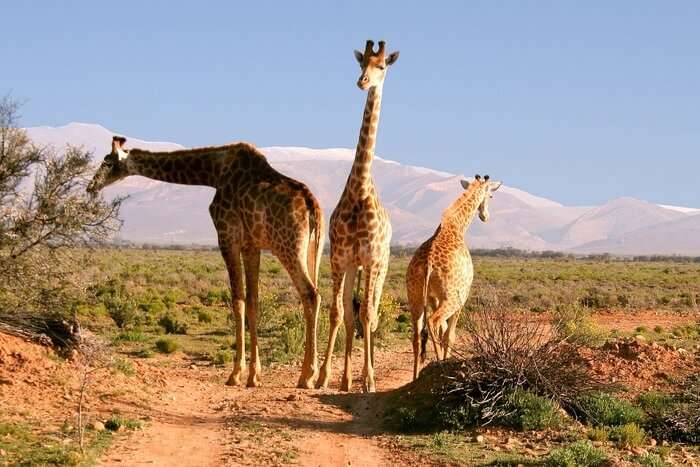 A tour of the wildlife in Tanzania is incomplete without spotting a few Giraffes. The task is easier than it sounds as Tanzania has one of the largest Giraffe populations in the world. Giraffe is a very friendly animal, known for its long neck and brown spots. It is a herbivore animal and thus, you can try your luck at feeding a Giraffe. Recently, the Giraffe population has seen a downfall and the animal species are now endangered.

If you are planning to travel Tanzania, then you must try to spot a Giraffe herd before the species becomes extinct. 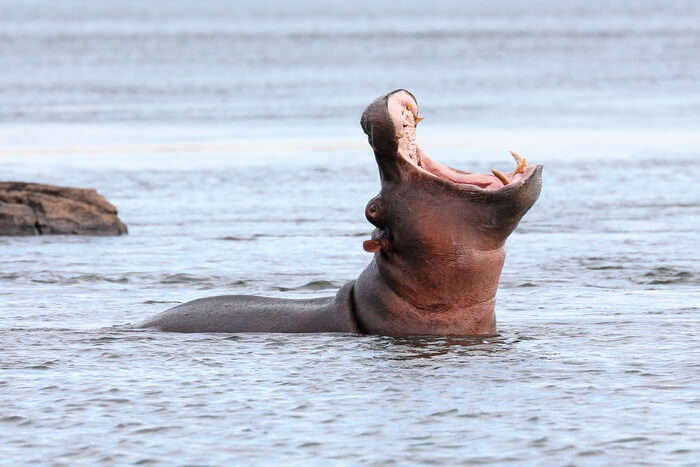 Hippopotamus in Tanzania is another animal species which is a part of the “Big Five” club. The country has a huge population of hippos which roam the fields throughout the year. They have no particular season of migration or calving. However, the best time to spot hippos is during the monsoon season.

As the rivers get filled with more and more water, hippos can be seen wallowing in the water. You can take canoe safaris as well to see the hippos up close. Along with hippos, during this season you can also spot a lot of Flamingos. 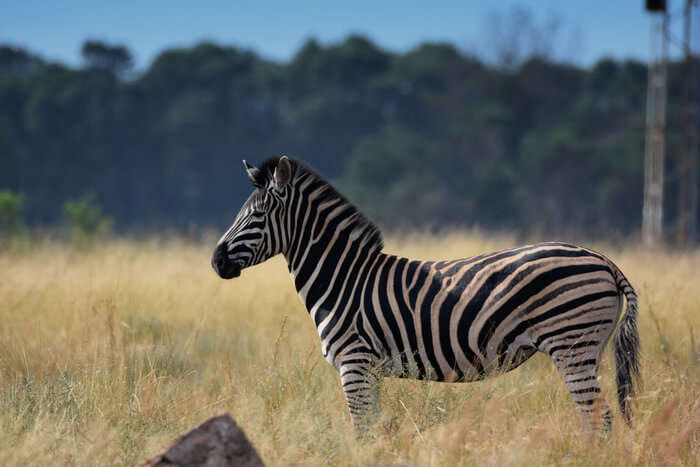 The white and black stripe animal has always been a favourite for most of us. We have seen a lot of them on the wildlife channels. If you are planning to visit Tanzania, you will have the chance to see the Zebras personally.

Zebra in Tanzania is as common as the wild dogs. You can spot them in herds in the fields or near the river banks. Most of the safari tours cover areas where you can spot animals like Zebra, Giraffes, Hippos, Wildebeests, etc. Most of the national parks and forest reserves have Zebras in abundance. 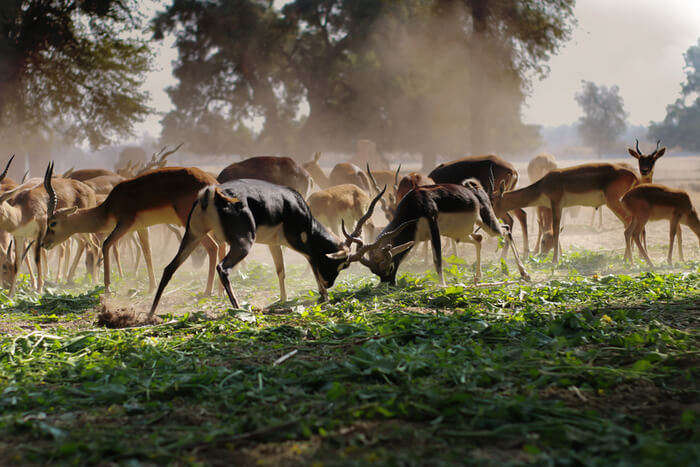 Antelopes in Tanzania are known to survive in all kinds of ecosystems. They are found in the fields, dry lands, marshlands, etc. Therefore, it is quite easy to spot an antelope if you are visiting a national park or forest reserve in Tanzania, Africa. There are numerous different species of antelopes found in Tanzania.

Some of the easily spotted species are Hartebeest, Eland, Topi, Dik Dik, Reedbuck, Waterbuck, Gazelle, Bushbuck, Impala, and Lesser Kudu. Impala is the only male antelope spotted in Tanzania. These animals are really fast and thus, very difficult to hunt. 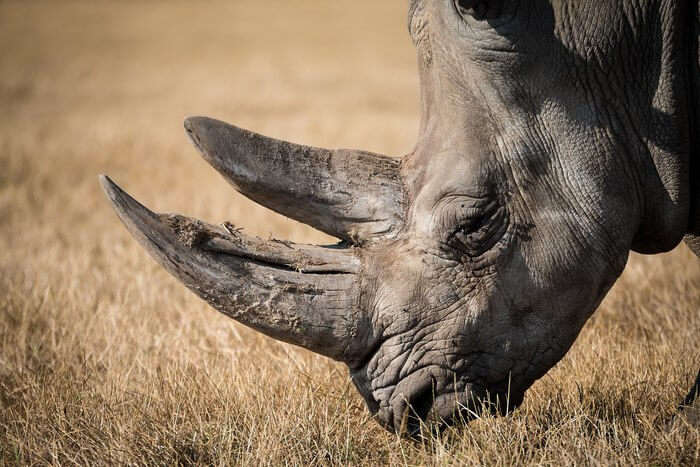 Rhinos have been an endangered species for quite some time now. These animals are now only seen in different zoological parks, national parks, forest reserves, etc. If you are visiting Tanzania, then you must try to spot a Black Rhino.

According to several Tanzania animal facts, Black Rhinos can only be spotted here. The rest of the world does not have an ecosystem to support Black Rhinos. Even in Tanzania, Black Rhino are a rare sight. A rare species of dogs found only in the forests of Tanzania is very different from the dogs you have ever seen! This species of dogs is said to be the biggest and the most ferocious. As per the local legends, if anyone has a pack of 3 African Wild Dogs, even the predatory animals do not go near their cattles. It is however, very difficult to capture or tame this species of dogs.

Over the years, African Wild Dogs have become an endangered species. They can now be spotted only in Selous Game Reserve and Ruaha National Park. 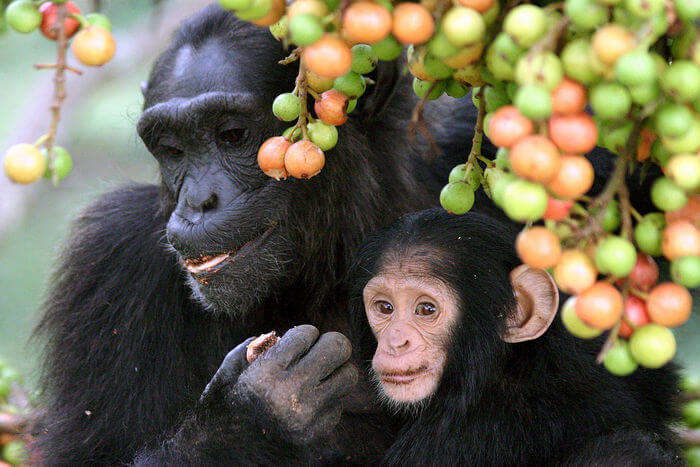 The wildlife in Tanzania is best known to support a variety of apes, monkeys, chimps and other gibbons. It is said to have a very healthy population of monkeys and other such animals in all the national parks and forest reserves. You can spot them during your tour very easily but beware. These animals have a reputation of snatching things or causing harm. The Gombe Stream Reserve and Mahale National Park are said to be the best places to spot Chimpanzees. These parks have also been places where various studies have been carried out on the chimps.

Africa as a continent is known to have the largest amount of Gibbon population. You are sure to spot several species during your visit.

Other Animals And Birds In Tanzania 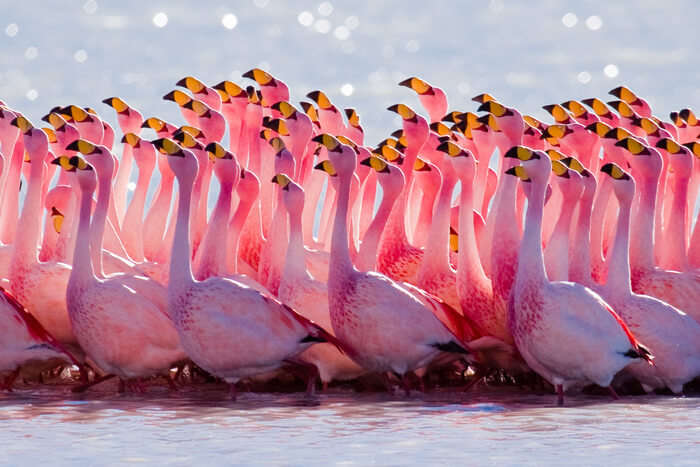 Apart from this Tanzania boasts of other animal species like Buffaloes, Hyenas, Jackals, Crocodiles, and a variety of Reptiles. The country is also home to various bird species like Hornbill, Trogon, Tinkerbird, Secretary Bird, Flamingos, Weaver, Flycatcher, and many more.

The best time for bird watching is between the months of November to April. Although you can spot the local birds all year round. The migratory birds from England and other cold countries fly to Tanzania during the winter season.

If you are a nature enthusiast then the wildlife in Tanzania will be a treat for your eyes. Make sure you are able to spot each and every one of these delightful species on your safari in Tanzania. Still waiting? Book your trip to Africa right away!

What is the best time to see Wildlife in Tanzania?

You must be here from July to October to see the Wildlife in Tanzania. These are pleasant months and the peak tourists season of Tanzania.

Can a solo woman take a wild tour in Tanzania?

Yes, they must come under an all-inclusive Tanzania wildlife tour package. This will include your local commutation, hotel stay, food and with an English-speaking local guide.

Are there man-eaters in the forests of Tanzania?

Yes, there are lions and leopards in Tanzania forest reserves, which are dangerous to humans. A guided tour is the best way to see wildlife attractions in Tanzania. This will be inclusive of safe jeep forest safari.

What to pack for Tanzania wild tour?

You must pack sunscreen lotions, insect repellent creams, binocular, photo, or video cameras, compass and a map of the National Park or the National Reserve area you are going to explore the wildlife.

What clothing is the best to wear for Tanzania wild tour?

July to October is a pleasant season in Tanzania. It is advisable to wear comfortable clothes for your wild tour in Tanzania. You can carry full sleeve shirts and pants to prevent insect bites.

Which is the best National park in Tanzania to see African elephants?

You must visit Tarangire National Park in Tanzania to see the wild African elephants in their natural habitat. You can see more than a hundred animals in a day trip elephant safari in this National Park.

Is Tanzania the best place to visit by bird lovers and photographers?

Yes, the bird lovers and bird photographers must visit Amboseli National Park in Tanzania. You can see more than 1,000 varieties of bird species during the migratory season.

Is Tanzania a safe place to take a wild tour?

Yes, it is advisable to come under organized wildlife safari tour packages. This will include an English-speaking local guide and jeep safari. 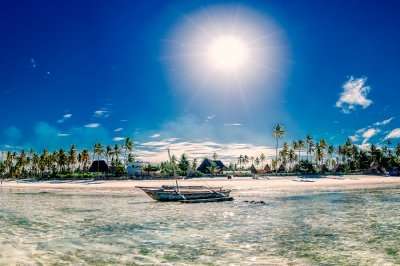 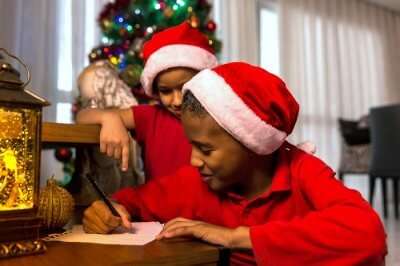 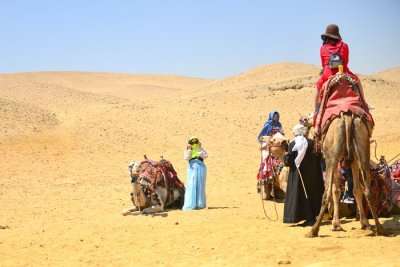