Winter In Saint Petersburg: A Guide To An Icy Paradise In The Heart Of Russia 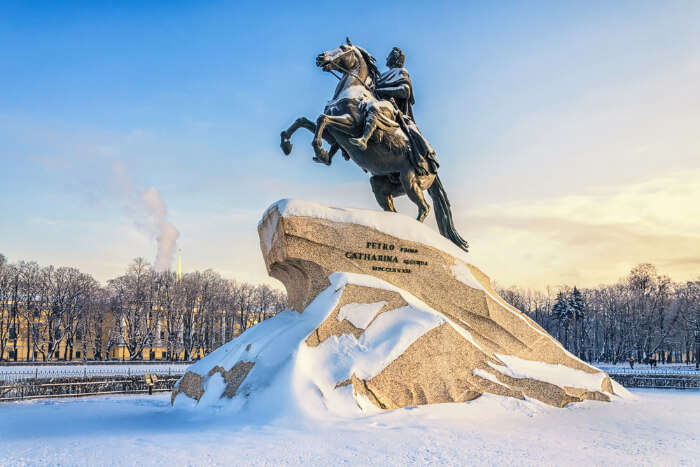 Sheets of ice adorn the streets and everything that encompasses around it. Icicles hanging from the roofs of the homes and the branches of trees in the gardens – St Petersburg transforms into a magical wonderland in the winter times. Winter in Saint Petersburg should definitely be on your bucket-list and we tell you why. For the entire season, among the St Petersburg winter activities, the best is to visit the streets to experience the winter wonderland, where contests are being held all over the town and you could try your luck too.

This place turns into a wonderland in its entirety during the winter season, and the snow gives it a look straight out of fairy tale.

Weather In St Petersburg In Winter

Since it is just 500 miles from the Arctic Circle, the winters are usually dark and chilly in St Petersburg. The winter season here lasts from late November to March. The rivers and canals freeze throughout this period and start melting only during Spring.

The St Petersburg Winter temperatures touch as low as -8*C. That does not deter the people of this charming place from coming out of their warm, cozy homes and having the time of their life even in the extremely chilled weather!

During the Christmas especially, the whole city is illuminated with colorful lights and while you take down a walk on the several bridges of St Petersburg and admiring the reflections the beauty of the reflection of the lights in the water.

6 Things To Do In St Petersburg In Winter

From ice skating to Ice Fishing to attending ballets – winter in St Petersburg is all this and much more. So, put on the warmest of your clothes and explore this fascinating city, especially if you are planning to visit Russia in January. You could also gulp down a few shots of Vodka too!

What better activity to do in the snowy winter than to skate? St Petersburg has a number of skating rinks and one of the most famous ones is the Kirov Park. If you are planning on visiting St Petersburg in winter, you should definitely not miss ice skating.

All the skating rinks are known for excellent ice; it is said that the ice is so fine since they are polished every couple of hours. Well, you might not know even a thing about skating, but it is never too late to learn. With so many helping hands (people of St Petersburg) there to teach you the basics, you might even become a pro at it by the end! Oh, also, there is some lovely music too playing at these rinks to get you into the ‘mood’.

Even if you don’t get the hang of it…do not fret. You can always ride a snowmobile. Since it is the festive season, the rinks also conduct contests, parties, and workshops.

Must Read: White Nights Of Saint Petersburg 2021: Where The Sun Never Sets, And The Fun Never Ends

Well, the name of the season also is in it and it is not without a reason. The Winter Palace, was where the royal family of Russia lived during the winter months.

It looks absolutely stunning and magnificent, engulfed in swirls of snow. It was home to the family of the Tsar or Tsarina during his or her reign, as well as the venue for entertaining important guests.

The interior is as royal as it can get with numerous ballrooms, staterooms, and dressing rooms. The exterior of the palace to is eye-catching, where people imagine it to be like one of those palaces which are only part of fairy tales. This palace is among the can’t-miss places to visit in St Petersburg.

The palace is always brimming with tourists and locals alike who want to get a peek into the life of the yesteryear royals. It is now home to the State Hermitage Museum.

This is a name that you do not reckon much with and rightly so. There are very few places that can offer you this sport and the Neva River in St Petersburg happens to be one of them.

The rivers and the canals in the magical city freezes during the winter and one of the sports the locals indulge in is ice-fishing. Your excitement will know no bounds when you witness it in progress.

If you are wondering what to do in St Petersburg in winter, you could try your hands at it, but make sure you have a local with you, as they will know every trick in the book to get the best catch. It is needless to say that make sure you are wearing oodles of warm clothes in the biting cold during winter in Saint Petersburg.

Winter is the perfect time to visit St Petersburg. There are many things to do in St Petersburg in winter; street parties happening all around the town and you might just catch the ‘fever’ too. Food and Vodka will be doing the rounds everywhere and you will not be able to get enough of it.

All things warm and fuzzy is what you will find on the streets, right from costume-clad locals to cafes inviting you to taste some amazing tasting ginger cookies.

Saint Petersburg in winter is as crazy and festive as it can get! In fact, in February, Maslenitsa, the Russian version of Pancake Day, is celebrated for an entire week.

A host of family and religious traditions are followed during that entire week and there also many fun activities that take place during those days. Christmas in Saint Petersburg is not complete without these traditions.

You could also see your favorite fairy tale characters walking down the streets and you’ll get a lot of photo ops when spending your vacation during winter in Saint Petersburg.

One thing Russia is widely known for is the Classical Russian Ballet, and during the St Petersburg winter festivals, there are many Ballet events. Famous among them is the winter ballet season at St. Petersburg’s Tchaikovsky Ballet Theatre production at the Hermitage Theatre, which performs famous Tchaikovsky Ballets such as “Swan Lake” and “Romeo and Juliet”.

To make it even more endearing, the ballet is accompanied by the Congress Orchestra. One place you need to visit during the winter in St Petersburg is the Mariinsky Theatre which showcases various ballets, the most well-known being the Nutcracker. Catching up with ballet is one of the most exciting things to do in Saint Petersburg.

Make use of the resources available in plenty and there is plenty of ice in this part of the world during the season. So if you want to know when does it snow in St Petersburg, then December and January are the time and ice-skating during this season is popular.

Sure, ice-skating is the more popular one, but ice-hockey is not far behind. The adrenaline rush that one gets out of watching their favorite team fighting it out on the rink is unparalleled and nothing can be compared to it. Make that most of winter in saint Petersburg by indulging in this activity.

The best place to catch a game while you are in this ‘chilled’ out city, literally and also as a metamorphic, is the Ice Palace, home to SKA St Petersburg, the local team.

While the games are not on, you could also rent out skates and try your luck in the game, that keeps the locals hooked, throughout the season. St Petersburg winter is not complete without this.

Winter in Saint Petersburg is a season that is sure to take your breath away. Sledding at Victory Park, Skiing at Tsarskoye Selo or Snowboarding at Okhta Park – the snow-clad city of St Petersburg is beautiful in its entirety. Winter in St Petersburg is mystical and at the same time, charming. The people of St Petersburg do not let the weather get to them and make the most out of this season too. This might be almost impossible for someone to imagine. So, pack up all your warm clothes and head to the yonder land of Russia and enjoy a jolly season!

Q. Does it snow in Saint Petersburg?

A. During the month of December, Saint Petersburg receives snowfall that makes it look magical. The canals in the city freezes, giving it a fairy tale look.

Q. How cold is Saint Petersburg during winters?

A. The temperatures in Saint Petersburg drops to -10 ºC. Although it is cold, it is not as cold as the rest of the Russia.

Q. How can I protect myself from cold in Saint Petersburg?

Q. What is the best time to visit Saint Petersburg?

A. The best time to visit Saint Petersburg is during the months of mid-June to September.

Christmas In Russia: Get Your Festive Mode On And Take A Flight to Russia In 2021

Know What Russia In May Has In Store For All Travelers

Russia In October 2021: Best Experiences Of The Wonderful Month

Russia In February: A Guide To An Ultimate Winter Vacation

Russia In September 2021: Things To Know Before Planning A Trip In This Month