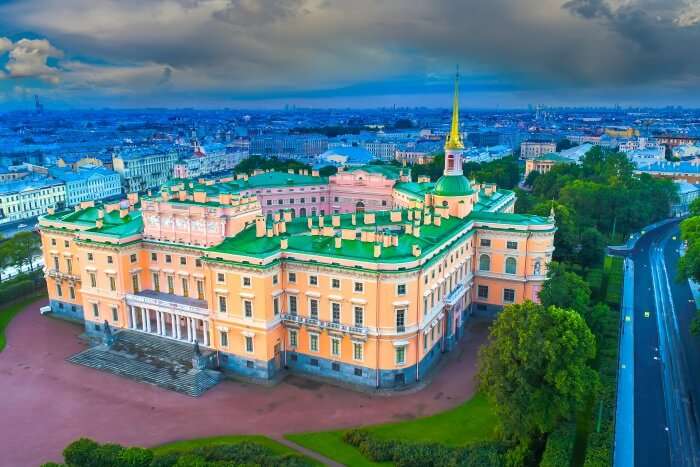 Russia is a land of wonders, a fact that can be quite clearly understood and comprehended if one just takes a look at it: it has a magnanimous past, rife with glorious wars and excitable revolutions; it has absolutely unmatched natural scenery, as the snowy wonderland (or wasteland, as some like to call it) offers scenes that one would not find anywhere else in the world; magnificent architecture that is best portrayed through their famous domes. As awesome as these are, one of the largely unexplored avenues are the castles in Russia.

The Top 10 Castles In Russia

Russia sets a high standard, as just about everything is unique and unmatched. Happily, their castles do not disappoint: Russian castles are more impressive than most, with the odd moat and common drawbridge making one feel as if they were back in the Middle Ages.

No list of fortified structures in Russia is complete without pages devoted only to the Kremlin. One of the largest fortified complexes in the whole country, the Kremlin is one of the most famous castles in Russia, leading the other castles and palaces by a head’s length. It overlooks the Moskva River, Saint Basil’s Cathedral and even the famous Red Square. The boundaries themselves contains five palaces, four cathedrals, along with the timeless classic, the Grand Kremlin Palace.

Must Read: 19 Cool And Unusual Things To Do In Russia That You’ve Never Heard Before!

This is probably one of the most attractive castles in the whole of Russia. Often called the Alupka Palace, this magnanimous and beautiful castle is found at the foot of the famed Crimean Mountain, near Alupka in Crimea. It was built somewhere between 18828 and 1848, for the famous and reputed Mikhail Semyonovich Vorontsov, at the jaw-dropping cost of just above 9 million silver roubles, by famed architect Edward Blore. The structure itself features the English Renaissance Revival style of architecture. Hailed as one of the oldest structures in the area, the Vorontsovsky Palace is a very popular tourist site.

Although this castle is a relic of the past, it still features some of the most impressive architecture. It was the site of an old fortress called Honeda, which, before it fell, used to belong to the Teutonic Order, and is one of the oldest Teutonic structures in the area, showcasing some of the best architecture by Teutonic masons. It is also famous for being the site of one of the decisive battles of World War II, as Soviet and German forces clashed near it, with the castle soon becoming one of the most famous abandoned castles in Russia. One can find the ruins themselves on the shore of the Vistula Lagoon, which is located north of Mamonovo.

Suggested Read: Wildlife In Russia 2022: Spot The Enchanting Fauna In The Largest Country Of The World!

Another one of the history-rich fortresses found in Russia, this awesome fortress is one that still stands strong to this very day. Built at the narrowest point of the Kerch Strait, this sprawling fortress served to protect the southern border of the glorious Russian Empire. Although now demilitarised, this fortress was a critical place during the times of Imperialist Russia, as it had successfully defended the Empire against foes, time after time. One can visit this fortress, as it is more or less quite intact. It features some of the best defensive architecture around and is a memento of the glorious times of Imperialist Russia.

Although this wonder of engineering is not what one would call a traditional castle or fortress, one has to say that it comes close. Larger than some of the actual fortresses found in Russia, this sprawling complex is one of the best examples of what one would call neo-Gothic architecture, a style that can range from amazing to shockingly good. Although the architect designed it with high towers and rose windows in mind, they were not present in the actual constructed building, a fact that is lamented by many.

This is by far one of the best-known buildings in this list of castles in Russia. Established and built in 1942, this marvel of a fortress can be found on the Narva River, along the Russian border with Estonia. One of the main purposes it serves was to act as a solid barrier against the advancing wave of the Teutonic Order. It is one of the oldest buildings in the area, which has gradually grown into the quite large town of Ivangorod, initially a village for soldiers and their families. Today, it serves Russia still like it a famous museum.

This is one of the more recent palaces on this list, as it was constructed somewhere between 1766 to 1781, by the famed architect Antonio Rinaldi, for the Count Grigori Grigoryevich Orlov, one of the favorite subjects of the Empress, Catherine the Great, and looks like one of the most royal castles in Russia. It was built in Gatchina, one of the farther suburbs of Saint Petersburg, the royal capital. It is one of the best examples of the famed Russian architecture, as it combines the classical elements of Russian architecture with ornate, fancy interiors.

Initially built by the Swedes, the town of Vyborg (named after the castle) has grown in and around the fort itself. The Vyborg Castle was built as the eastern outpost of the Kingdom of Sweden. It is doubtless one of the most famous beautiful castles in Russia. While the fort can be traced as far back as the late 12th century, it currently serves Russia as a famous museum and attractive tourist destination.

This is another one of the famous Teutonic castles that one keeps hearing about. This medieval fortress is one of the best preserved fortresses in the country, retaining more than most of the medieval technologies advancements that it was initially equipped with. The town of Mayovka grew around the Georgenburg fortress, now is a fairly large town. Although it was a German populated town at the beginning, it changed hands in World War II, and thus became a famous Russian town.

One of the better-known fortresses on this list, this fortress is one of the best preserved fortresses in the country, still retaining all of its original masonries, along with repairs made in modern times. The wooden fort was replaced with a solidified stone structure in 1515, as the fort required a stone structure in order to function as a garrison, stationed as a defense against the Kazan Khanate. Featuring towers that highlight the best of Russian defense architecture, Dmitrovskaya Tower is one of the best-known towers of this famous Kremlin.

As presented, one can see that the Russians, though they may have had a fairly violent history, were masters of expert engineering- very few military fortresses in the world can match the protective value of their famous Kremlins. All castles in Russia are unmatched and are a must-see on the list of anybody who plans to visit Russia.