Best Places To See On A Holiday In Northeast 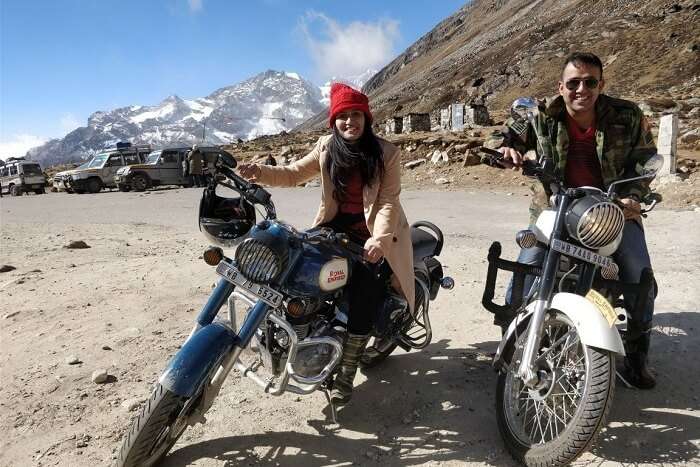 The thrill of traveling to new places can’t be described in words but it can certainly be felt and our holiday in northeast is proof of that. We had been traveling extensively across India for the past two years and northeast was one of the places that was yet to be explored, so finally when we got time for a holiday, choosing our destination wasn’t that difficult. I traveled with my husband (Mr. Mohit Sharma) and my little sis (Ms. Sakshi Mehta) and quite frankly it couldn’t have been better.

Finally when it came to a package for our holiday in northeast, we decided to go for TravelTriangle since we had already had a great trip to Thailand with them and trusted them to do the same with this one too.

Details of our holiday in northeast

Day 1: Gangtok – The start of a beautiful journey

We arrived at the Bagdogra airport at around 4 in the evening, so by the time we reached Gangtok it was quite late. We had booked the hotel in Gangtok (Hotel Greendale) ourselves and after we had checked in, we kept the luggage and rushed to savour the famous kathi rolls on MG road. As expected, they were delicious! Later, we returned to our hotel and had a good night’s sleep.

Day 2: Gangtok – Of lakes and mountains

Suggested Read: North East Trip: Exploring The Soul-Stirring States Of Seven Sisters, One Brother, And A Neighbor In India!

After breakfast in the hotel, we left for Tsomgo lake and Nathula pass trip. Everything was well arranged by Golden travels. The drivers were on time, and Mr Pradeep had also arranged our passes for Nathula pass. Everything went on smoothly. The driver was also a really nice guy. I felt the innocence of the Sikkimese people as he narrated his life’s story.

Tsomgo lake was freezing but it was fun. Clicked quite a few pictures there and then started our onward journey to Nathula Pass. If Tsomgo was chilly, Nathula pass was inclement. My brain almost stopped working there. We had a cup of coffee, which wasn’t close to coffee though but helped us gain some senses. After spending half an hour at the pass, we then had mouth watering Maggie at one of the small restaurant cum shop suggested by the driver itself. We reached our Gangtok hotel room by 6 in the evening and after a quick nap, freshened up and left for Baker’s Cafe, our food paradise for the evening. Needless to say, everything here was super delicious.

Day 3: Lachen – The surreal charm of the mountains

Suggested Read: 20 Must Visit Places When Travelling To The North East

Today in the morning, we left for Lachen but this time, the driver wasn’t that good. But anyway, I won’t spoil my memories any further discussing about him.

Suggested Read: 9 Places To Visit In Sikkim: Extraordinary Realms In The North East

The journey to Lachen was beautiful and on our way, just before reaching our hotel, we also had momos at a cafe in Chungthang, which eventually became our hotspot. We reached our hotel (Royal Lachen) at around 5pm.

The hotel was clean, food was simple and awesome, and quite frankly we were really not expecting such good standards in a place like Lachen.

Day 4: Lachung – The most picturesque day of our trip

Early morning (5am), we left for Gurudongmar lake. The hotel staff had packed poha for our breakfast which we had in a little Hogwarts (just kidding), at a localite’s home. This was an experience in itself.

Gurudongmar lake is good but the journey is bit tiring. And guess what my brain again stopped working once we reached the lake, but the view was breathtaking so I managed to click a few pictures which have received too much appreciation on our social media accounts (wink again). This time while returning, we had some awesome momos at Cafe 15000, run by the army and some life saving coffee provided for free.

We reached Lachung and loved the surprise our hotel room gave us when we opened the balcony for the view was breathtaking (Hotel Royal Lachung).

Day 5: Gangtok – Beauty within us and all around

We are not morning people, but waking up to a view like the one in Lachung was priceless (few snow covered peaks, river and sunshine on one of the peaks). It had snowed the previous night. We were damn lucky, it was the first snowfall of the season.

Later after breakfast, we began one of the most beautiful journeys of our lifetime, to Yumthang valley. It was so alluring that I cannot describe it in words. Snow on the trees, sunshine peeping in. Everything was so perfect about the place. After Yumthang valley, we proceeded towards our incorrect decision taken the previous night… to Zero point (neither the hotel staff nor the driver guided us right as we had asked them so many times if it would be worth visiting the place or not). There was nothing great about Zero point. There were chilly biting winds that’s it. We returned to Gangtok, and this was our only night left in this wonderful state. We went back to MG road for some hogging. This time it was “the coffee shop” and the place did not disappoint us at all.

Day 6: Goodbyes are hard but we promise to come back

This was our last day and early morning we left for Bagdogra airport with a cute driver uncle. Even the drive from Gangtok to Bagdogra was beautiful with river Teesta adding charm to the splendid beauty throughout.

Suggested Read: On A Mesmerizing Trip To Northeast, We Found Our Winter Wonderland

Overall, our holiday in northeast was one of the best ones we have had so far. The people of northeast are as pure as its nature and we loved their friendly vibes and warm hospitality. Right from the majestic mountains to the food, culture, ambience, and the sweet company of my husband and sister, everything was fab!

High Points of your trip

Low points of your trip

The only bad thing during the entire trip was our experience with the driver (Madan, who kept on eating Rajnigandha, kept spitting on the streets, kept stopping the car to buy more of those packets, and he had a problem if even after 2 hours we asked him to stop for toilet/tea, he threw plastic bottle on a street of Lachen where they are totally banned, unfortunately 3 days of our trip was with this guy who had no etiquettes how to behave in public.

Mesmerized by the stunning photographs they clicked? Well, you too can create your own beautiful memories. Book a northeast package from TravelTriangle and enjoy a personalized trip!

20 Most Spellbinding Places To Visit Near Gangtok In 2021!

Neemrana Fort Palace: A Brief Guide For Your Weekend Trip In 2021!