11 Festivals In Finland To Blend In The Country’s Culture Like Never Before In 2021! 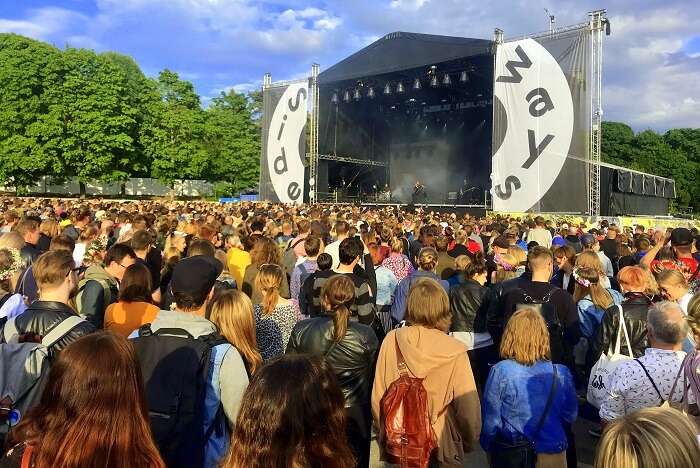 If colors, happy faces and festivities are your thing, you better hop onto the Finnish Bandwagon. Festivals in Finland will give you an experience of a lifetime, one you wouldn’t definitely want to miss!

Midsummer festival also known as Juhannus is a traditional Finnish festival that takes place on a Saturday between June 20th and 26th, on this day bonfires are lit at lakesides and by the sea, branches of birch trees are placed on both sides of the front door, a maypole is erected and unmarried women who seek husbands bend over and look into a well naked to see their future husband’s reflection or collect seven different flowers to place under their pillow so they can dream about their future husbands. A lot of drinking and celebrating takes place during this time along with Music festivals, Finnish flag day etc and since Finland is close to the Arctic circle the nights are very short or almost or non-existent.

Must Read: Castles In Finland: 9 Citadels That Breathe Life Into The Forgotten Medieval History

Just like in many countries Christmas and New Years in Finland is celebrated with great enthusiasm though the traditions may vary, Christmas season starts from Christmas eve and ends 13 days after Christmas during which there is plenty of merrymaking, shopping, Sweets and gingerbreads, holiday drinks, winter activities and so on and during the New Year celebrations people experience the Northern Lights along with fireworks and plenty of celebrating.

When: 25th December and 31st December

Image Source
This is an urban music and arts festival held in Helsinki where artists from different genres and nationals come to perform. The flow festival also holds exhibitions of visual arts, urban spaces, films and film screening and so on. This festival has seen famous artists such as The Black Keys, Kanye West, Bon Iver, The National, Kendrick Lamar, Iron & Wine and so on.

Suggested Read: The Snow Lover’s Ultimate Go To Guide For Finland In Winter

Tuska Open Air Metal Festival also known as Tuska is one of the largest and popular Finland metal Festival that takes place every year in Helsinki, the festival dates have always varied from June to July and they draw in bigger crowds every year ever since it started in 1998. Various prominent metal artists such as Children Of Bodom, Ghosts, Opeth, Celtic Frost and other have come to perform here.

Suggested Read: Finland Lakes: Explore These 10 Lakes On Your Next Finnish Trip

This festival has been held in Finland In Sodankyla ever since 1986 in the second week of June where it hosts International and National films for 5 days without break and runs around the clock, this is in reference to the fact that during this time the sun can always be seen and there is no night at all. Some of the biggest names in the film industry like Roger Corman, Terry Gilliam, Francis Ford Coppola and so on have attended this festival. This is among one of the more popular summer festivals in Finland.

Suggested Read: 10 Best Restaurants In Finland For The Gastronomer Within You!

Image Source
This is an international contemporary art and film festival is organised in Helsinki every November and has been since the year 2000 , here new talents for contemporary theatre come along with being a platform for developing new trends and ideas, it helps bring together the Baltic and Nordic communities and is considered a meeting point for artists, audiences and performing artists from different nations.

Suggested Read: All Aboard For A Free Visit To Finland? Make Sure You Don’t Miss Out On The Details

This festival has been around since 1968 and is the biggest and important folk music and dance festival in the Nordic Countries which hosts artists from around the world, both professional and amateurs. It takes place in the town of Kaustinen and it lasts for around a week. If you love folk music then this is the place to go during a visit to Finland.

Image Source
This is the second oldest rock festival in Finland and has been going on since 1971 and lasts for 3 days during the weekend days, here both international and national artists come to perform with artists like Imagine Dragons, Portishead and more showing up to take stage. This festival, which takes place at Laulurinne in Joensuu in July, is organized by Joensuu Pop Musician’s Association which is a non-profit organization and any profits made goes to supporting the local bands and artists.

Suggested Read: Finland In April: A Guide To Explore The Paradisiacal Views Of This Paradise In 2021!

Image Source
One of the oldest and also a pioneer of Finland music festivals, Pori jazz first took place on July 1966 and though it started small it grew in popularity every year and is not one of the biggest and renowned music festival in Europe. This festival is dedicated to Jazz music takes place in Kirjurinluoto in Pori city and many artists like Miles Davis, Ray Charles, Dizzy Gillespie, Chick Corea and more and have come and performed in this festival. If you love jazz music then this is the place to be.

Suggested Read: 10 Most Fascinating Places To Visit In Finland, The Unspoilt Paradise

Image Source
This is one the oldest tango festival in Finland and the world and it is held every year in July in Seinäjoki, Finland. During this festival they hold competitions, which is open for both men and women, where the country’s best tango dancers, singers and composers come to compete against each other, the festival also holds live music performances and public dancing which is not restricted to just tango though it is encouraged. The biggest competition is the tango singing competition called the Tango Royal where a tango king and a tango queen is chosen and the whole event is televised as well.

Image Source
This is a LGBT pride event held in Helsinki in Finland and takes place in June the week after midsummer and it lasts the whole week, this festival holds sporting events, a rainbow fair and at the end a Pride parade which ends in the park where further celebrations take place with music shows, speeches and more.

There are numerous events and festivals in Finland which you can attend during your visit to Finland whether you’re visiting with your friends or family. So, don’t think too much and plan a trip to Finland right away to enjoy these festivals!

Which festivals are celebrated in Finland?

What is Midsummer Finland?

Midsummer Finland is a national holiday and a celebration of summer solstice.

10 Glorifying Argentina Festivals That Acquaint You Into The Culture

Top 16 Jazz Festivals In Europe To Make Your Vacation A Musical Delight In 2021!

Running Of The Bulls 2021: All About The Craziest & Most Adventure-Filled Festival In Spain

Festivals Of Canada: 10 Unmissable Extravaganzas That Will Give Celebration A New Meaning In 2020!

15 Spectacular Festivals In Thailand 2021 That Are All About Love, Lights, & Legacy!