All About Forth Bridge: The Pride Of Scottish Highlands 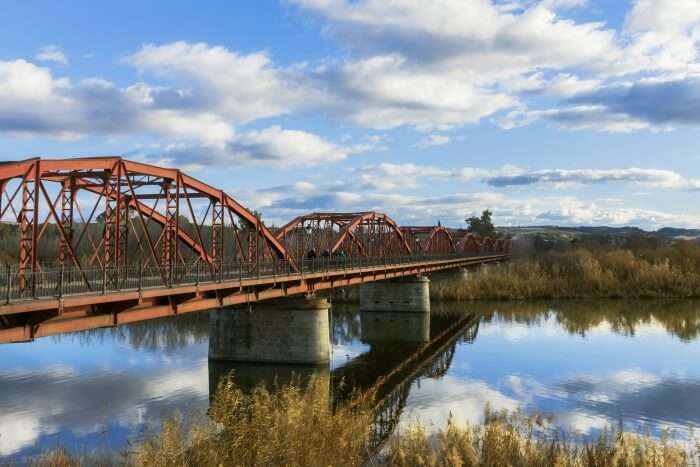 There are some marvellous structures that just attract you towards it. Be it the magnificent Eiffel Tower in Paris or the Pyramids in Egypt or even our very own Taj Mahal, we are in awe of the intricacy of the work that went into creating such pretty sights. When we do that, we seldom give attention to other such marvels like the bridges of the world; San Francisco for one features among the top. Forth Bridge in Scotland is another such wonder that leaves you speechless.

This wonder of a railway bridge, which crosses the Forth estuary in Scotland, was the world’s longest. The forth bridge length was 541 meters when it opened in 1890. The Forth Bridge is still the greatest cantilever trussed bridge, which is still operational to date. While it was built a long time back, the intricacy of the design is just mind-boggling, to say the least. No one can point out that it is merely a rail bridge with the kind of structure it has.
A new Forth Road Bridge has also been constructed beside the bridge now. It went through a round of repainting in 2011 and looks as good as new.

The bridge consists of three double-cantilevers. These cantilevers are joined together by long girders and are connected to the main structure of the bridge by huge rivets. The cantilevers stand strong on granite piers. The structure just looks magnificent and the engineering genius will just amaze you; maybe that is why it is one of the structures protected by UNESCO. On a daily basis, around 200 trains pass through this bridge, which also offers a generous space of 150 feet for the ships and boats to travel underneath it.

How To Reach Forth Bridge

By air
Edinburgh International Airport is just 11 kilometers from the bridge.

By road
The A90 is the route that you need to take if you want to visit the Forth Road Bridge. There are also regular bus services to both North and South Queensferry from Dunfermline, Edinburgh Airport, and Edinburgh. You could also ride up in a bike, where the east footpath on the Forth Road Bridge is open to cyclists.

By boat
There are boat rides that take you to the bridge and it is still stunning from down below.

Things To Do Near Forth Bridge

The bridge was built to connect Edinburgh and Fife, and it also further leads towards Dundee and Aberdeen. Here are a few things you can do around Forth Bridge

1. Spend Some Time At Port Edgar

Port Edgar Marina has tons of things to do and is the best spot to catch a glimpse of the New Forth Bridge. It is a place of harbors and eclectic ambiance. There are clubs and there are a lot of activities that you could probably take part in. Port Edgar Yacht Club is one such club that offers you a chance to cruise in a yacht; if you don’t have your own, you can hire one too. Then, there is the Queensferry Rowing Club, which offers free sessions for those who are willing to learn about the sport. There is also a paddle club for those interested in trying their hands at that. Also, there is a range of other water-sports available at the Port Edgar Watersports CIC which include Dinghy Sailing, Keelboat Sailing, Powerboating, Sea Kayaking, and Stand Up Paddleboarding, amongst others.

This pretty little town is located to the south of the Forth Bridge and is worth a visit. It offers some great views of the bridge and the river below it. Stroll through this quaint town dotted with plenty of cafés and restaurants. You could also hire a bike and ride around the town, and from any point, you would see a different angle of the bridge.

If you are interested in learning more about the town and also the bridge, head to the Queensferry Museum, where you will find abundant information and some interesting facts about the town and the bridge. Dalmeny House, a gothic revival mansion and also the Hopetoun House, a country house and a great wedding destination these days, are the other places you could visit in this part of the town. You could also take a boat tour from this port town, which will take you under the bridge and also to the Island of Inchcolm, which houses an abbey and the remains of the World War 2. You could also take one of the coastal walks that this town offers.

South Queensferry is located to the South, North Queensferry stands on the northern bank of the Firth of Forth. Since North Queensferry is on the southern end of the popular Fife Coastal Path, which offers one of the best trails in the whole of Scotland, you could go for a hike to Carlingnose Point Nature Reserve, from where you could privy to some of the great views of the bridge. If you are not that adventurous, you could also walk up to the Queensferry Light Tower, which is the smallest one of its kind in the world and is still in use.

Another interesting and fun thing to do while you are there is to visit the Deep Sea World. This is the country’s National Aquarium, where you will find plenty of sea creatures to amuse you. The highlight of this aquarium is an underwater viewing tunnel, complete with a moving walkway. You could also just stroll through this part of the town, which is again dotted with plenty of options to eat and relax. You also hire a ferry from here to travel under the bridge.

The Castle is located near Linlithgow, on the southern banks of the Firth of Forth. It is considered to be one of Scotland’s most impressive strongholds and it the exterior of the castles looks like a ship that never sailed and that is what it is often referred to as. Explore the Blackness Castle, which was later fortified and has also been used as a prison, armaments depot and also for filming Hamlet! From the castle, you get some breath-taking views of the Firth of Forth and also beyond, up to Fife. In the lawns of the castle, there are display boards and the cobbled paths are uneven. Close to the Castle is the Linlithgow Palace, which was one of the principal residences of the Scot monarchs. Take a trip down memory lane here.

Suggested Read: This Winter, Escape To The Best Honeymoon Destinations In Europe In Winter 2020-21!

5. Walk Down The Forth Road Bridge

While the Forth Bridge is a rail bridge, this newly constructed Forth Road Bridge is one where you can walk across. You could also ride the bike along the bridge and take in the up-close and stunning views of the Forth Bridge. There are two cycle paths – one to the east and one to the west. While the east is open all the time, the west side is open on Saturdays and on Sundays too during the winter. There are several walks that are offered from this bridge and it is one of those walks that you will remember for a long time and should be on your itinerary.

Further Read: 10 Castles In Bruges Which Reflects The Heritage And Grand Architecture Of This European Country!

If you want to take an up-close look at the bridge, there are chartered boats for those who want to indulge in a bit of luxury and there are also boat tours, with glass-roofs for viewing the Bridge in all its splendour. Forth Bridge is an icon in Scotland by itself for its sheer engineering genius and is one that should be part of your things to visit on a trip to Scotland. There are efforts being made to make even this rail bridge accessible to the tourists. Well, if that happens, it would again be one of a kind!

Museums In Phuket Where You Can Get In Touch With The History, Art & Culture In 2022