Explore Gwalior Fort In 2022: An Epitome Of Architectural Grandeur 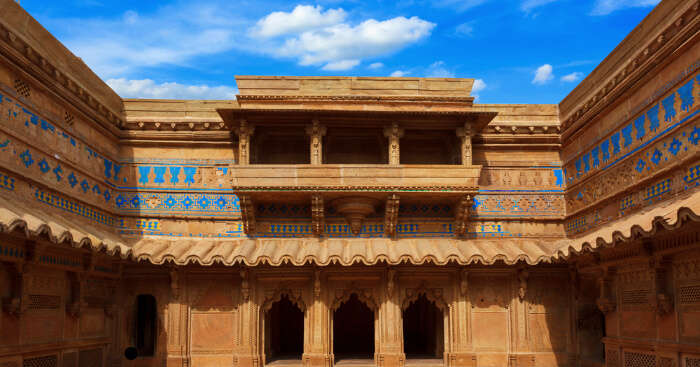 Gwalior Fort’s moss-covered domes, giant faded doors, and carved walls, looming over the old city of Gwalior, have withstood everything that came their way. It’s believed that the fort already existed in the 10th century, and the inscriptions and monuments found inside the premises specify that it may have existed as early as the beginning of the 6th century. Standing on a rocky, long, narrow outcrop of Vindhyan sandstone, which rises 300 feet above the surrounding countryside, the foundation of Gwalior Fort is quite ancient.

Over the centuries, Gwalior kila passed through the many hands—the Huns, Prathiharas, Qutub-ud-din Aibak, princes of Kanauj, Akbar, the Tomars, Kachwahas, Jats, and Marathas. According to Sikh history, Guru Hargobind (the 6th guru), was held captive at Assi Khamba Bawri near the Man Singh Palace in the 17th century during the rule of Jahangir. And in the early 19th century, Gwalior Fort and the city became the reason for a long disturbance between the British and the Scinids.

Must Read: 40 Tourist Places In Madhya Pradesh That You Should Be Visiting In 2022

You can visit the Gwalior fort anytime from 6:00 AM in the morning till 5:30 PM in the evening. On an average it will take at least 3 to 4 hours to travel the entire Gwalior fort. Don’t miss on the timings of the light and sound show which is indeed beautiful. For Indians, the entry fee is  INR 75 per person and for Foreigners its cost INR 250 per person and for the entry of children below 15 years of age, it is free of cost.  Best time to visit Gwalior Fort: October to March and December and January Timings and charges of Gwalior fort light and sound show: Hindi at 7:30 pm and English at 8:30 pm for 45 minutes. Indians: INR 100 for adults and Children: INR 50. Foreign tourists: INR 250 for adults.

Suggested Read: 8 Gorgeous Beaches In Lebanon That Promise A Refreshing Vacay In 2022

Highlights About Gwalior Fort – Get Mesmerized

Image Source India is a country that is surrounded by rich history spanning era after era. Forts were fundamentally built to protect from enemies and till now the forts of India stand strong. How wonderful it is after so many years, India has maintained the beauty and exquisiteness of its forts. One of the majestic forts in India is Fort of Gwalior in Madhya Pradesh.

The imposing architecture of Fort of Gwalior embedded by the concrete walls of sandstone dominates the complete city of Gwalior. The beautiful carvings of the fort comprise of the second oldest reference to the number “Zero” which can be seen at the top of the fort. The architecture of the marvellous fort has a fascinating history associated with it which can be seen in two different parts. Temples, palaces reflect the fine artistry in the hands of the workers who created this beautiful palace. The exterior is also sculpted exquisitely containing blue ceramic tiles.

Dazzle your eyes with the splendid and remarkable sound and light show hosted every evening in the Fort of Gwalior. When you will witness the show, it will seem that you are experiencing the history of the fort as the show is very well performed. The show showcases the love story of Raja Man Singh and queen Mrignayani. The show is conducted in the amphitheatre in Man Mandir and the timings of the show are: Hindi Show starts at 7:30 PM in the evening and English Show begins at 8:30 PM in the evening.

It is quite interesting to know that the fort you will be visiting is included in one of the largest forts in India. You will be amazed to see that the second oldest reference of zero in mathematics is seen in a carving in temple in the Fort of Gwalior. The inscription done in the Gwalior fort is about 1500 years old. Isn’t it exciting? The fort is as old as the 6th century. You are going to witness many palaces, temples, water tanks like Shah Jahan, the Karan, Man Mandir, the Gujari and the Jahangir.

Inside The Majestic World Of Gwalior Fort

One of the iconic monuments in the history is famous for monuments and forts is situated in Madhya Pradesh. You will get to experience the culture of ancient era, numerous facts, legends and will surely impress you when you walk out of the gates of Gwalior ka Kila.

1. The sculptures of Jain Tirthankaras

Gopachal hill inside the fort premises houses 1500 idols. The stunning sculptures of Jain Tirthankaras were carved on the face of the cliff during the 15th century. The size of these idols ranges from 6 inches to 57 feet. The largest idol is of Bhawan Parsvanath (42 feet H and 30 feet W).

Suggested Read: Purana Qila: A Guide To One Of The Most Trivialized Historic Monuments

Image Source It is said that the temple was built either in the 8th or the 11th century, which was renovated in the 19th century. The design of Teli Ka Mandir is a fine amalgamation of north and south Indian architectures.

Built by King Mahipal of Kachchhapaghata dynasty, the Sas Bahu temple is also known as Sahastrabahu temple. Vishnu in his Padmanabha form is worshipped in this temple. As per the folklore, the wife of Mahipal was a worshipper of Lord Vishnu and her daughter-in-law of Lord Shiva so a new temple was built for her. Manuel Joseph, who is an assistant superintending archaeologist, says that the temple was possibly called Sahasra Bahu, which means “thousand arms” (another name for Vishnu), which with time morphed into Saas Bahu.

Suggested Read: 8 Things To Do In Parwanoo: Discover The Northern Pearl Of India In 2022!

Inside Gwalior Fort, there are several palaces that were built by different rulers. One of the most spectacular palaces is Man Singh Palace built by Man Singh Tomar during his rule from 1486 to 1516. The palace’s exterior is decorated with blue and yellow tiles on bronze walls. Also, there are lattice-screens, mosaics with floral and geometrical patterns, cornices, and pendants. The grand palace houses many rooms, underground passages, corridors, and courtyards.

Suggested Read: 25 Captivating Places To Visit In Bhopal – The City Of Lakes In 2022

Image Source One of many palaces in side Gwalior Fort is Karan Mahal built by Kirti Singh, who was the 2nd kind of Tomar dynasty. Other than a few lattice-screens and some sculptures, the structure of the palace is simple. Recently restroed, Karan Palace is older than Man Mandir Palace.

Image Source The elder brother of Man Singh, Vikramaditya Singh built Vikram Mahal, which was also known as Vikram Mandir. The palace had a temple of Lord Shiva which was demolished during the Mughal Period. The temple has been rebuilt right in front of the palace.

Image Source Gujari Mahal was built for Mriganayani, who was Man Singh’s queen. The palace was later converted into an Archaeological Museum, which remains open from 9:00 am to 5:00 pm. The museum has a wide collection of sculptures, artefacts, weapons, pottery, and coins.

Further Read: 33 Regal Forts In India That Are Popular Tourist Attractions Today In 2022

If you want to lose yourself in the memories of great battles, brave dynasties, and epic stories, you must visit Gwalior Fort once in your lifetime. Gwalior ka Kila is a must visit destination for the travellers and tourists coming from all across India to Madhya Pradesh. One of the oldest forts Gwalior ka Kila was constructed by Hindu Kings. You must not miss out some of the ancient artifacts in Gujari Mahal now turned into a museum. Plan your trip to visit the exquisite masterpiece of India known as Gwalior ka Kila. Disclaimer: TravelTriangle claims no credit for images featured on our blog site unless otherwise noted. All visual content is copyrighted to its respectful owners. We try to link back to original sources whenever possible. If you own rights to any of the images, and do not wish them to appear on TravelTriangle, please contact us and they will be promptly removed. We believe in providing proper attribution to the original author, artist or photographer.

What is the Gwalior fort height above sea level?

Gwalior fort is within an area of 3 square kilometres and rises 1033 meters or 3389 feet above sea level.

What is special in Gwalior?

The present-day Gwalior Fort was built by Man Singh Tomar in the 15th century.

What is Gwalior fort known for?

Gwalior Fort is quite popular for its glorifying history, magnificent architecture and enormous structure. It is one of the most impenetrable forts in India and lures travelers from across the world with its exclusive experiences.

Why Gwalior Fort is called Gibraltar of India?

Gwalior Fort was entitled as ‘Gibraltar of India’ by the Mughal Emperor Babur who reigned in the 15th century. It was called so because it provides panoramic sights of the old Gwalior town.

Why was the Gwalior fort built?

The exact period of the construction of the Gwalior Fort is unknown. However, it is believed that it was built by a local ruler Suraj Sen in the third century. However, later in the 15th century, it was reestablished by Raja Man Singh Tomar.

Is Gwalior a metro city?

Gwalior is the heritage city, located in Madhya Pradesh, India. It is one of the most developing cities in the country.

What is the old name of Gwalior?

During ancient times, Gwalior was known as Gopgiri and Gopadri whereas the beautiful hillock on which Gwalior Fort is located was called Gopachal.

What can I eat in Gwalior?