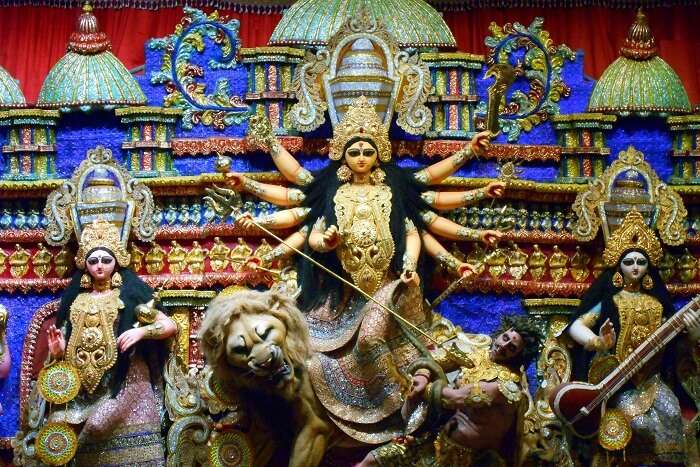 Malaysia is globally famed for its secular credentials. The majority of Malaysian population is of Muslims at 61.3%, while Buddhists and Christians are at 2nd and 3rd positions with 19.8% and 9.2% respectively. According to the official figures though, Malaysian Hindus comprise merely 6.3% of total population. They are the 4th religious group in the country. Predominantly a Muslim nation, Malaysia is considered a tourist magnet and a peaceful nation where believers of all religious faiths are respected and tolerated. You can witness several Hindu temples here at all nooks and corners of the country. Select few Hindu temples in Malaysia are popular with everyone.

Must Read: 10 Indian Restaurants In Malaysia For An Excellent Gastronomic Experience

Kuala Lumpur in Malaysia is famous for housing the richest South Indian Hindu temple, Sri Mahamariamman Temple. It appeals to the devotee visitors as well as tourists in the Chinatown vicinity where a glimpse of this beautifully designed temple augur the visitors to plan at least one visit. Stands as one the famous hindu temples in Kuala Lumpur, Malaysia, Late K. Thamboosamy Pillay had constructed it in the year 1873 and developed that into a private shrine. Since it had been opened for the general masses in 1920, it gained immense popularity as the worshippers of Mother Goddess Amman keep flocking in here. The convoluted statuettes and grandiose façade of this temple add to its beauty. Its main entrance seeks the attention of visitors with an imposing Gopuram. It remains a popular temple in Malaysia with pedantically sculpted 228 Hindu deity idols that are worshipped by the devotees throughout the year. The number of visitors multiplies during Deepavali and Thaipusam Hindu festivals.

Located in Malaysia’s Malacca state, Sri Poyatha Moorthi Temple is recognised worldwide for being the Southeast Asia’s one amongst select few of the oldest operational Hindu Chitty temples. Although its architecture is simple it seeks the attention of all devotees besides large chunk of tourists. According to the historic recounts, Chitty preacher Tha Vinayagar Chitty had constructed this temple way back in 1781. Devotees of Hindu God Lord Ganesha keep flocking here. This temple is in the limelight for one more reason. Its location alongside Cheng Hoon Teng Temple and Kampung Kling Mosque vicinity projects great communal harmony in this country. That is perhaps the main reason that this location is also denoted with the metaphor—Harmony Street.

Suggested Read: Shopping In Georgetown Penang: 7 Best Places To Buy The Best Of Everything in Malaysia

Malaysia’s famous landmark, Tebrau Glass Temple is a must visit in country’s Johor Bahru area. Also denoted with its name Arulmigu Sri Rajakaliamman Glass Temple, it is popular amongst the Indian community especially Hindu visitors from around the world. Current temple is a renovated one with the use of glass thus it earned the new name since 1996 while it had been inaugurate for the general public. It maintained rare destination of getting listed in the Malaysian Book of Records – 2010 as the only glass built temple in the country.

Famous Indian Hindu temple in Malaysia, Maran Murugan Temple is visited by the devotees worshipping Hindu God Lord Murugan. As per Hindu belief, Lord Ganesha’s elder brother, Lord Murugan seeks equal respect. This temple is also popular by its other name, Sri Marathandavar Bala Dhandayuthapani Alayam. As the stories go one, the area nearby this temple witnessed happenings of several miracles. Presence of a sacred tree in temple premises is considered to be one such miracle. Devotees arrive here for worship to re-impose their Hindu faith.

Named after the place where it locates, the Klang Perumal Temple in the Klang area of Malaysia’s Selangor region is the Vaishnavite Malaysian temple popular as the oldest amongst all. This temple is denoted with many metaphors including being called the “Thirupathi of Southeast Asia” besides other popular name, Sri Sundararaja Perumal Temple for the Hindus to worship in Malaysian region. As large chunk of South Indian Hindus worship Lord Vishnu, this temple is thus dedicated to the Lord Vishnu deity.

Located in the George Town area of Penang region in Malaysia, Waterfall Temple or famously called Arulmigu Balathandayuthapani Kovil Temple is the one in this country where Lord Murugan is being worshiped. The temple is dedicated to that Hindu God and witnesses the gathering of sufficient crowd when the majority of Malaysian Hindus celebrate the popular Thaipusam festival. One important factor about this temple is that any devote willing to worship here is supposed to climb the 513 stairs with this aim to worship Lord Murugan and to pay homage to the Hindu God. Considered largest of Murugan shrines outside India, its tallest Gopuram standing at 21.6m height is a popular attraction there.

Hindu temple in Malaysia with its connections with a local Tamil village in India, Sri Ayyanar Temple is a globally recognised one today. A belief goes on that one Tamil migrant worker in Malaysia named Periamma had made a tiny statue of Sri Ayyanar Hindu God with sand and clay materials that had been brought from India then. With fast increase in the worshippers’ numbers over a period of time, that makeshift temple attained manifold popularity. That tiny temple has already become a popular and splendid temple today where approximately 72 feet tall Sri Ayyanar statue seeks attention of all worshippers. The original idol which Periamma had crafted centuries ago is still kept there.

One of the recent yet vibrant Hindu temples in Malaysia namely Sri Shakti Devasthanam had its consecration ceremony in the year 2013 in the relatively calm and quiet environment of Bukit Rotan village in Malaysia. Since then, this temple became popular landmark in the Selangor region, where its magnificent appearance appeals to Hindu devotees for worship. Also famous as Sri Shakti Temple, it is known for its huge Gopuram that was meticulously sculpted to fit in the 5-storeyed temple. All 51 Shakti statues inside the temple corridor seek the attention of all devotees. According to Hindu belief these deities represent the 51 ‘Shakti Peeth’ in Indian subcontinent located in numerous places.

Malaysia has been welcoming the establishment of countless temples, including these 9 beautiful hindu temples in malaysia, which remain worth visiting places during a Malaysian tour. They are not necessarily exclusive for Hindu tourists or devotees only. Good chunk of tourists with their beliefs in other faiths too visit these popular Hindu temples. They are ultimate destinations to evaluate great architecture as well as nature’s bounty in Malaysia. Book a ticket to Malaysia and make sure to stop by at these stunning sights.

How many steps are there in Murugan Temple Malaysia?

Also referred as the bigggest temple cave, there are around 272 steps to climb Murugan temple in Malaysia.

Are the Batu Caves free?

The entrance fee for the dark caves is 33RM per person which includes a guide, flashlight and helmet. However entry to the Batu Caves is free (for now).