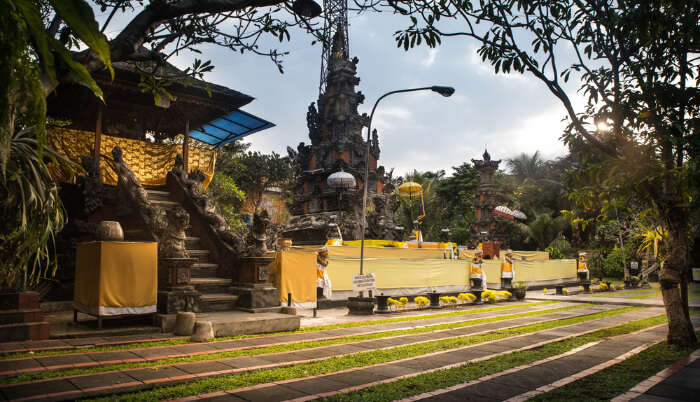 The capital city of Indonesia, Jakarta is a huge metropolis that houses diverse cultures and various ethnic groups in its heart. An exquisite example of modernisation, it has rapidly expanded from villages to a busy yet beautiful megapolitan city. The city houses iconic landmarks like famous temples and various hangout places including cafes, pubs, malls, arcades and hotels. Jakarta temples have unique architecture and getaway that is sure to impress any traveller. Here are the top temples in Jakarta you simply must visit on your next trip.

The city of Jakarta experiences a fusion of many traditions and cultures and that can clearly be seen in it’s temples. Visiting these marvelous Jakarta temples is one important step for understanding the cultures of Jakarta.

The Jin De Yuan is a traditional Chinese temple, with a great history of its own. First built in 1650, the temple was destroyed during the Chinese Massacre by the Dutch during 1740. Later in 1755, Chinese captain Oei Tjhie rebuilt it and today it is popularly known as the Vihara Dharma Bhakti. The temple consists of Buddhist, Confucian and Tao statues signifying the Buddhist Mahayana faith. Be it the carvings on the walls, or the calligraphy and paintings on the pillars, the temple is a work of art and Chinese cultural expertise.

Must Read: 7 Most Romantic Places In Jakarta For Creating Great Memories With Your Partner

The Vihara Dharma Jaya is another Chinese temple in Jakarta which was built around 259 years ago. The temple is coloured bright red and has numerous carvings and paintings of might dragons and birds on its roof. The government of Jakarta has built a new two-storey construction behind the original structure which accommodates the large crowd that visits the temple everyday other day. Beautiful chinese lanterns can be seen hanging from the ceilings, with numerous altars placed around the new hall. Rows of candles are placed neatly by the walls, showcasing the chinese traditional values.

Suggested Read: Winter In Jakarta: A Detailed Guide To Explore One Of The World’s Greatest Megapolis

Jakarta’s oldest Chinese temple, The Vihara Tanda Bhakti or the Jin De Yuan is around 256 years old, and is dominated by the colours red and yellow. Originally built in 1650 by Chinese lieutenant Kwee Hoen, the Buddhist temple is dedicated to the Goddess of Mercy, Kuan Yin. It constitutes of two temples, the principal temple and an annex temple right near the entrance. Following the traditional Chinese design, the temple’s ceramic ceiling represents the three virtues of happiness, longevity and prosperity.

Suggested Read: 8 Best Islands Near Jakarta That Are All About Bliss, Recreation And Thrill

It is a Buddhist temple located in the western Jakarta. The temple houses a large praying hall which has three lifelike statues of Lord Buddha. The first floor of the temple is where devotees store ashes of their ancestors. The temple experiences a huge rush during the lunar year. The whole temple is an exquisite example of the perfect fusion of modern and traditional architecture and has a picturesque look to it.

Suggested Read: Bachelor Party In Jakarta: 8 Places Where One Should Go And Bid Adieu To Bachelorhood In Style!

The Aditya Jaya Temple is located in the Rawamangun area of East Jakarta. The Hindu temple has a soulful and soothing atmosphere and looks a lot more like it’s not in Jakarta but in Bali. The architectural beauty of the temple is pretty different than that of the Buddhist temples. Many food vendors sell different Indonesian delicacies around the temple. The tranquility and serenity of the temple make many people visit it after the office hours.

Suggested Read: 8 Amazing Places Near Jakarta You Ought To Visit In 2022

The Pura Widya Mandala is a Balinese hindu temple located in the southern part of Jakarta. Located right behind the Pancasila University, the serene temple is an example of great Balinese architecture. Featuring Balinese carvings and paintings on the walls, roofs and pillars, the temple looks beautiful and catches the hearts of the visitors. Balinese people living in Jakarta connect greatly with the temple as it houses the traditional styles and calligraphies they have grown up with.

Located in the eastern part of Jakarta, the Mustika Pura Dharma is another beautiful Hindu temple of the region. The temple’s architectural beauty is completely different from the traditional Indian temple architecture. The temple area is full of greenery and is spacious enough to house large crowds. It has a soulful and serene aura of its own and sees regular traditional activities and is never deserted. The spacious yard of the temple is also used for weddings and receptions complemented by the lush greenery of the trees.

Suggested Read: New Year In Jakarta: Welcome 2022 With A Bang At These Extravagant Party Places!

The temple is located in the Marinir complex of Cilandak, South Jakarta. The atmosphere in the temple is pretty calm and peaceful. People from all communities visit the temple in their free time, while the Hindus of the region visit the temple for prayers. The temple spreads over a large area and is spacious enough to house large conglomerations of visitors.

Suggested Read: Jakarta In December: 6 Exciting Things To Do For An Unforgettable Holiday!

The Widya Dharma Cibubur Temple is located in the Cibubur campground area of East Jakarta. The temple is adorned in shades of orange and brown and has exquisite carvings and sculptures on the walls and roofs. The temple houses some very beautiful stone sculptures and has a very spacious green yard. The yard is used to run yoga sessions and weddings and also for setting up regular public health camps.

Istiqlal Mosque is the largest in SouthEast Asia with the capacity of 200,000 people. First opened to the public by Indonesia’s first President, Soekarno in 1978, the grand Istiqlal Mosque of Jakarta has five storey buildings, tall minarets and fairly large land coverage. Istiqlal means ‘Independence’. Designed in 1954 by Frederich Silaban, a Christian architect the mosque was constructed to commemorate Indonesia’s struggle for national Independence. Along with 4 levels of balconies, the large rectangular prayer hall has a 45 meter diameter dome supported by 12 round columns. Visitors are simply left stunned by its sheer scale and massive prayer hall.

Suggested Read: 15 Places For Shopping In Jakarta That Will Give You A Shopaholic’s High!

One of the oldest temples in Jakarta, the Jiwa Temple is located in a small village named Segrana village. It is a Buddhist temple, built between the 5th and 8th century. Most of the temple is gone and what remains now is only the complex area. Upon arriving, one can see the complex which is square shaped and sits two layers higher than the ground level. The temple is open from 8am in the morning and closes at 5pm, throughout the week. The exotic relics of the temple look magnificent due to the adjoining rice fields in the village, and is a sight to behold.

Are you amazed by these ancient temples and their stories yet? It is known to all that these Jakarta temples are an absolute bliss for one to visit. So, do not wait any longer and plan a holiday to Jakarta and have the best time of your life.

Is Jakarta worth a visit?

Jakarta is definitely worth a visit. The place houses some of the popular temples and mosques. Apart from this, other places you can visit are Menteng Flea Market, Jakarta Chinatown, Ragunan Zoo to have a great experience.

How far is Borobudur temple from Jakarta?

Borobudur Temple is one of the most famous temples located in Central Java, Indonesia. It is approximately 418kms away from the Jakarta city. You can easily access public vehicles or choose to drive along the way.

What is best in Jakarta besides temples and mosques?

Although, Jakarta is famous for some of its most popular temples and mosques, there are few other tourist attractions as well that allure the visitors to flock the city. Here are a few of them ;
1. The National Museum
2. Ragunan Zoo
3. Merdeka Square
4. Menteng Flea Market
5. Thousands Island
6. Taman Mini Indonesia Park

How many days do you need to explore Jakarta?

Over the years, Jakarta has become a metropolitan city with many suburbs. To explore the city of Jakarta, it is advisable to spend at least 2-3 days. You can later move on to other places nearby (Bali and other Islands) to continue your exploration drive.

Is Jakarta safe for tourists?

Jakarta, overall is a safe city with world standards. However, tourists should take care while walking on the street late at night as instances of pickpocketing and accidents have been reported sometimes.

What is the best month to visit Jakarta?

The best months to visit Jakarta is deemed to be from May to September. These are the dry seasons with bleak chances of rainfall. The temperature generally hovers around 24-32 degree Celsius. The weather is exceptionally pleasant at this time which makes your sightseeing a really enriching experience.

How expensive is Jakarta?

Expensive is a relative term which depends on the country you’re traveling from. For any developing nation, Jakarta can be easy on your expenses. If you’re traveling from India, the estimated cost would fall around INR 40,000 for a 5 days stay including your flights, to and fro. The hotels are easily available at a low cost. The food is comparatively cheaper as well.

Best Things To Do On A 7D/6N Romantic Trip To Bali!

Nikhil And His Wife’s Exquisite Honeymoon Escape To Bali In April!

A Vacay Of 9 Days In Bali Is All Sudha And Her Husband Needed To Experience Sheer Bliss!