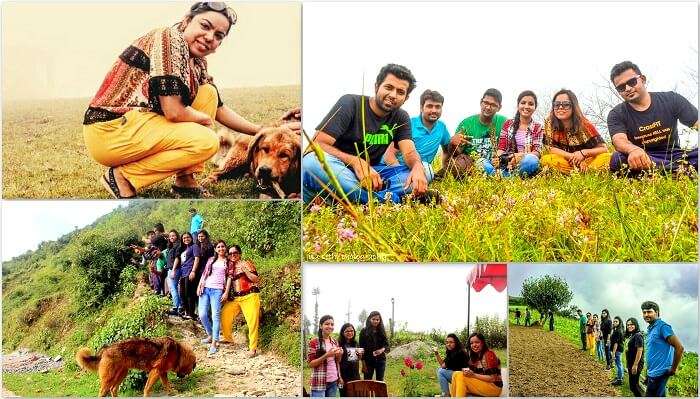 Kanika Mathur recalls her fantastic getaway to the offbeat hill station of Chakrata. Her short weekend Chakrata trip from Delhi was planned by TravelTriangle and it included her transfers, accommodation, meals, treks, and sightseeing – all for a cost of INR 4,099. Calling her trip to be an amazing escape from the daily hustles of city life, Kanika also tells us about why she took this trip and her family tradition behind it. Let us hear her story!

Chakrata was part of my “must-visit destinations in North India” list since a long time and frankly, I just wanted a reason to visit it. Fortunately, that reason turned out to be TravelTriangle because when I saw their super affordable Chakrata camp trip offer, I could not resist.

And even though I had never been to Chakrata, I had heard great stories about it from my mother and grandmother courtesy a family tradition set up by the two.

My grandmother in her teens (when the concept of solo travel for women wasn’t even heard of) had gone on a solo trip to Chakrata from her school in Mussoorie. Her bold move laid down the foundation for the future ladies of the family – which my mother also fulfilled! And now, it was my turn!

I was super excited!

I found the Chakrata trip from Delhi on TravelTriangle’s Facebook page listed under the event section. Finding the 2 days itinerary for Chakrata to be extremely value for money along with being short and crisp, I decided to go for it and fulfill the legacy I was destined for!

Moving on, post multiple queries with TravelTriangle representatives, I soon finalized my 1 Night and 2 Days Chakrata road trip and was soon set for a short hilly escapade!

Must Read: Top 5 Places To Explore In The Cantonment Town Of Chakrata

Things To Do On A Chakrata Budget Trip

My Chakrata road trip was one of its kind and I cherish all of the experiences I encountered on this marvelous vacation. Find below the extraordinary experiences that I had on my Chakrata escapade.

Day 1: Saying hello to the hills!

Distance from Delhi to Chakrata: 320 km

Our pickup for the Chakrata road trip was scheduled at Akshardham Metro Station and personally, for me, there couldn’t have been a better place since the complex also housed a Haldiram outlet – perfect for a solo traveler who did not want to sit in the bus and wait for others to arrive. Moreover, the food there is awesome!

We left for the Chakrata trip from Delhi at around 9 pm after verification by the TravelTriangle team. The seats on the bus were comfortable and arranged in a nice manner – with single seats on one side and double on the other. For someone traveling solo, this was an ideal scene since I could sit on the single seat and enjoy my own space without intruding or being intruded by others.

During our overnight journey, we made multiple stops for food and refreshments and one stop out of compulsion since our bus broke down.

Suggested Read: 10 Terribly Overrated Destinations In India & Where To Go Instead

We reached Chakrata in the morning and OMG, it was a sight to behold! As described by my mother and grandma, this was a quaint offbeat town that was nestled comfortably in the lap of nature! There were only two hotels in this lush green area and we were staying at the best one – Ramatal Hotel.

Another good thing with our hotel was that it was camp based which was exciting since staying here now felt more adventurous.

Post our check in, we were served a delicious breakfast which I presume was cooked by the hosts themselves since the food quality and arrangements were excellent!

After taking some rest, we then proceeded on to visit the famous Tiger Falls and it was a magnificent experience. Right from the start when we boarded our tempo traveler for a visit to the falls, I had started getting an adventurous vibe and true to my feelings, the whole experience did turn out to be awesome!

With narrow roads to drive on, there was hardly any space for the incoming vehicles to pass by and with waterfall water leaking out of the rocks every 2-3 km – it really would have been a challenging experience for anyone! Our driver, however, was in a league of his own and handled everything impeccably and skilfully!

Suggested Read: Taking The Offbeat Route: How I Fell In Love With The Wild Side Of Chakrata

Later on, as we were about to reach the Tiger Falls, I could already hear the sound of rushing water even though we were about a km away from the main place. This hidden jewel in the lap of Uttarakhand was the most anticipated part of this trip.

Finally, when we reached the falls, I was amazed by its expanse! The area was huge and with fish farming going on at full speed, it looked as if we were in some different place altogether and not in the hills. Achieving the tranquility and peacefulness away from the bustling city culture was extremely overwhelming. The untouched beauty of the magnificent Tiger falls made our jaws drop to the ground.

The whole ambiance was complimented by the sound of rushing water and it was truly a very unique and refreshing experience!

Later on after an exciting photo session, we proceeded back to our tempo traveler for our return journey to the hotel.

Although we missed having the fish that being served there, still no regrets since what I was about to see next would completely overshadow everything!

Suggested Read: 15 Things To Do In Chakrata In 2021 That Will Have You Coming Back For More

Spotting the tiger at tiger falls!

So just at the start of our way back journey in the tempo, a few people including me caught a glimpse of a full grown tiger. It was a catch and miss moment but it was real! Our heartbeats began pumping faster since absolutely no one was expecting an encounter with the wild beast! We were lucky to have been inside the tempo otherwise this would have become a classic scene from some Bollywood movie! I was so surprised beyond measure and so happy to have seen the beast in the wild and not in some park or zoo!

Upon our return at the resort, we were served some evening snacks and later on a sumptuous dinner in the company of a roaring bonfire (thankfully not the tiger!). Everyone thoroughly enjoyed each other’s company and there was even an introductions round that followed.

Sitting here amidst nature with new friends felt really nice and talking to them made me realize how the meaning of travel is different for everybody!

One funny thing that happened here was now that we had encountered a wild tiger, no one was willing to go out alone. It was funny and scary at the same time since everyone was afraid and roaming around in pairs and groups! Haha!

Day 2: Chakrata, you will be sorely missed!

This day I woke up at my own pace, had a sumptuous breakfast, one last chai, and then checked out of the hotel for our trip back to Delhi.

Although there was also an option for me to get up early and go on an early morning trek but I ruled it out since I was tired. But the ones who had done it recalled the experience to be a refreshing one!

On our way back, we stopped by a nice restaurant where a buffet was arranged for us and it wasn’t just an ordinary meal! There was a proper 3-course menu with ice cream and beverages – all for a cost of 400 bucks! (total value for money!). This buffet turned out to be a nice ending touch to the whole journey that gave us so much in such a short span! I returned home happy, content, and relaxed!

Suggested Read: Top 20 Places To Visit In Uttarakhand In Summer In 2021 To Dial Down The Heat

Chakrata was an awesome experience for me. It was a value for money trip that helped me fulfill a long running legacy. The whole place was breathtakingly beautiful, serene, and peaceful. Spending time here was the best decision ever and hopefully when I come back next time, the stay is going to be much longer the memories much sweeter!

Suggested Read: 10 Heart Stirring Treks Near Delhi Waiting To Be Explored By You

The bus Ac at the start of the trip was not working properly which ultimately led to a breakdown. Had we taken timely action, we could have avoided an unnecessary delay. Also, because of the bus breakdown, we had to skip one spot that was to be covered in Chakrata.

A paradise for nature lovers, Chakrata features pristine and pollution-free atmosphere. This untouched town offers a scintillating view of the Himalayas and soothing greenery. Spend your weekends in adventure or relaxation while opting for a trip to Chakrata with TravelTriangle!

Solo Trip To Uttarakhand: 12 Places To Visit For The Ultimate “Me-Time”

6 Beautiful Resorts Near Haldwani Where You Can Have A Comfortable Stay In 2021!

Your Nag Tibba Trek And Camping Guide For 2021 Himalayan Vacation