London Bridge: An Interesting Guide To Visit This Iconic Bridge In 2022 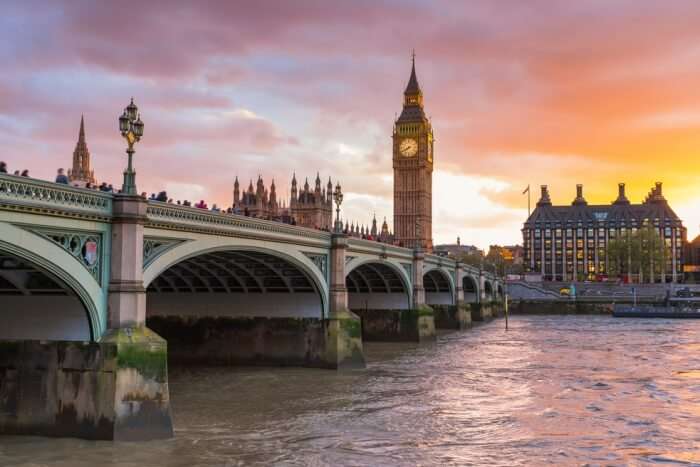 World’s leading global city, London is one of the select few old cities in Europe. Being the capital and the largest city of England and the United Kingdom, this city is sought after by all the travelers seeking to explore the European region. Out of the several attractions that appeal to the visitors, London Bridge equally remains a big name as the greatest landmark in this global city.

Constructed on the famous River Thames to connect the twin cities of London and Southwark, this bridge is a popular landmark in the central London area. The nearby areas are flocked by both local and international travelers. People make memories here by clicking some snaps which they can showcase for their presence at this historic location during the United Kingdom tour.

Suggested Read: London In June: A Handy Guide To Feel The Zeal Of Celebration During Summertime!

London Bridge is quite a landmark and a top attraction frequented by visitors. Read on, to know some more tourist attraction here.

An iconic modern building in London which also happens to be the tallest of all, The Shard is a supertall skyscraper and a modern monument with 95 floors where travelers visit to enjoy luxury living and to taste the finest recipes served in the restaurant. One can also enjoy amazing views of the London Bridge from The Shard. Enjoy a dinner date at one of the restaurants here with the iconic London Bridge views.

Must Read: A Mini Guide To London For First-Time Visitors

As the modern London Bridge is a replica and metaphoric symbol of centuries’ of existence, it offers much to the travelers. Even older than the London city, the areas nearby the bridge are historic sites for exploration. Modern landmarks are highly impressive especially the bustling neighborhood welcomes the travelers to enjoy great food, amazing drinks and last but not the least indulge in shopping activities. Being an amazing urban landscape, this area is the heart of the whole of London.

Located nearby the modern day London Bridge, the famous Tower of London is considered one of the most attractive and imposing sights flocked by hundreds of thousands of tourists each passing day. It takes tourists back to the floodgates of memories from the past. This historic fortress reminds one of the Norman conquest era too. The monument used to be a palace turned prison turned zoo over several centuries. Today, it is one of the most popular places to visit in London due to it being home to the Crown Jewels.

Suggested Read: London vs Paris: Which City Would You Prefer For A Fancy Holiday?

History lovers will definitely feel fascinated witnessing the HMS Belfast nearby the London Bridge. It is one of the heroic battleships which was used in the Second World War and also the Korean War. Travelers to London now evaluate it, as it has been kept for display. One can learn interesting things about the British military through the HMS Belfast that has been kept on display.

Hay’s Galleria is a popular picturesque landmark nearby London Bridge. Tourists enjoy taking shelter in this old warehouse wharf during the rainy time and also marvel at the architectural beauty that it is. You can relish some light food, coffee and buy other pieces of stuff around this place from the local shops. Several pubs, cafés, and restaurants nearby it offers a variety of food choices.

The historic ship Golden Hinde is kept nearby the London Bridge for tourists to watch. One can explore the ship throughout the year as the crew is friendly. Being a living history museum, this ship reminds one of the great work of Sir Francis Drake’s flagship ship which used to sail into enormous seas way back in the 16th century as part of the great adventures then.

A good chunk of travelers like to have some fun by viewing cultural and literary events. They can’t ignore the Unicorn Theatre where cultural activities are literally redefined. Considered as the most modernist amongst all London based theatres, it is known for interactive plays which keep the viewers hooked. The visitors are of all age groups who come here for unlimited fun moments. To avoid last minute rush, you should rather book your seats well in advance.

Suggested Read: London In March 2022: All You Need To Know About The Square Mile In Spring

The uniqueness of the Old Operating Theatre Museum nearby London Bridge is that it is here that you come to know much about healthcare and developments in the medical sector over the centuries. This museum is an extremely informative one for know-how of the herbal remedies to unsanitized conditions and much more like a variety of medical supplies as well as surgical equipment collections for an awareness purpose. A visit to this museum truly is a learning experience.

Suggested Read: 10 Historically Significant Castles Near London You Must Visit When Exploring The City

Shoppers can’t ignore the Borough Market while they travel to London. As the distance between London Bridge and Borough Market isn’t too much, one can explore it to buy different kinds of stuff, especially souvenirs to take back home. It is also a famous food market in the London area where you can taste local and intercontinental recipes and much more during your trip to London.

The modern London Bridge and its surrounding areas offer ample avenues to spend a memorable time during a London trip. Visit the Sky Garden and have a drink in the Royal Oak Pub or the Hide Bar during your visit to the city. And while exploring the London Bridge if you feel like stopping for a cup of coffee, then head to Elliot’s Café there! And you would definitely come back with a pocket full of memories!

Is London Bridge and Tower Bridge the same?

No. Tower bridge is a merged suspension bridge built in London between the time of 1886 to 1894. Located close to the tower of London, this is an iconic bridge in London.

What is special about London Bridge?

London Shopping 2022: 15 Best Places To Help You Glam Up Your Wardrobe & Home!