Loy Krathong: Make A Wish And Float A Lantern In 2022 At This Magical Thai Light Festival! 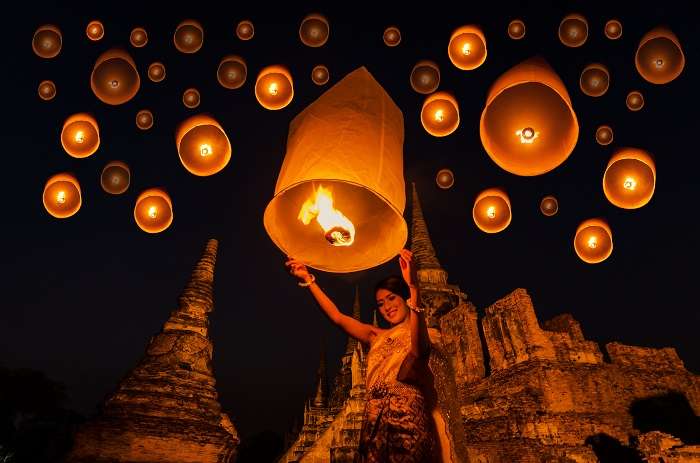 Thailand is a country where every other day is a celebration and people dwell in the joy of festivities. No matter if it is the new year or new moon, the Thai people are enthusiastic to celebrate every festival with great zeal and vigour. Talking about that, if you’re planning to visit Thailand in November, then the biggest celebration of the year awaits you.

The Loy Krathong or the Thai Light Festival is the biggest celebration of the year after the Thai New Year festival. With the night sky covered with brightly-lit lanterns and Krathongs floating on the water, every corner of Thailand brims with joy and vibrance of the festival. Scroll down to know everything about this Thai Light Festival and become a part of the most picturesque festival of Thailand.

Suggested Read: 9 Ayutthaya Temples That Are A Must-Visit To Experience The Best Of Thailand In 2022

The Loy Krathong is an ancient Indic festival which was at first commemorated as a ceremony where the Thai people paid their good wishes to 3 different gods namely, the Phra Phrom (Brahma), Phra Narai (Vishnu) and Phra-ISuan (Shiva). But almost 150 years ago, on the urge of King Rama IV this festival was accepted as a ritual to honour the Buddha.

After this change, this festival is celebrated all over Thailand as a festival of lights. The people make various kind of lanterns which are donated to the temples. Apart from this people pray for the prosperous future and fulfillment of wishes and hopes. The lights are then floated in the river which signifies of drifting away the bad luck and misfortune.

What Is The Meaning Of Loy Krathong?

The literal meaning of ‘Loy’ in Thai language is ‘to float’ whereas ‘Krathong’ means ‘a small container’ which is authentically made of a piece of banana-tree trunk which contains a candle, incense and flowers. During this festival the the floating Krathong symbolises a person willingly letting go of hatred and anger.

Loy Krathong is an annual festival celebrated in Thailand with great vigour and zeal in November full moon to mark the end of rainy season. On the night of the festival, the river lits with the lighted Krathongs which are floated by the Thai people. This festival signifies the purification ceremony to enlighten the mind.

When Loy Krathong Is Celebrated?

In Thailand, Loy Krathong is celebrated on a full moon evening of the 12th month in the traditional Thai lunar calendar. According to the western calendar, the festival usually falls in November. However the exact date of the festival is declared one month before the Loy Krathong festival.

Note: Following date is a full moon day on which the festival is based, however this date is not confirmed.

Where And How To Celebrate Loy Krathong Festival In Thailand?

The Loy Krathong Festival is celebrated all over Thailand wherever there is water, but still there are some special places where this is celebrated on a large scale. Among all the places Sukhothai, Bangkok and Chiang Mai are the best places in Thailand to witness this Thai Light Festival.

Let Your Lanterns Soar Up High At Sukhothai

Suggested Read: 10 World Heritage Sites In Thailand That’ll Make You Fall In Love With It All Over Again

Sukhothai is a birthplace of Loy Krathong festival, thus the locals celebrate this festival with special passion. One of the best places in Thailand to witness the joyous festivities which includes offering food to monks, which is later followed by drama, dance, music and martial arts.
Loy Krathong is celebrated for five days and all the celebration takes place within the boundaries of Sukhothai Historical Park (old city).

Tip: If you want to witness the celebrations of Loy Krathong in Sukhothai, then it is advised to book your hotels months prior because this place is the most famous place in Thailand and has very less hotels.

Float Your Krathong At Bangkok

Bangkok is another place where Loy Krathong is celebrated on a grand scale in Thailand. The city is beautifully adorned with ponds and waterways in public parks where locals can float their lighted Krathongs. Many couples can be seen watching the route of their floating Krathong to predict the future of their relationship. Apart from this Wat Arun and Wat Yannawa are some of the other places where people can be seen floating Krathongs down the Chao Phraya River.

Suggested Read: 10 Best Things To Do In Chiang Mai For A One-Of-Its-Kind Holiday Experience In Thailand!

Chiang Mai is the only place where Loy Krathong is celebrated alongside with Yi Peng (Chiang Mai’s Light Festival) which is another light festival of Northern Thailand. The highlight of the festival are the brightly-lit sky lanterns (also called the Khom Loi in Thai language) which fills up night sky. Made of rice paper which is stretched over a bamboo frame and a candle attached to it.

Tips To Enjoy The Best Of This Festival Of Lights

Suggested Read: 15 Thailand Temples To Visit In 2021 That Will Surpass Your Definition Of Beauty And Grandeur

And Lastly You Can’t Miss The Loy Krathong Song

Excited much to be part of this grand Thai light festival? Hurry up and book one of the best Thailand holiday package with TravelTriangle and let your Krathong float in the water and bring you prosperity and happiness for lifetime!