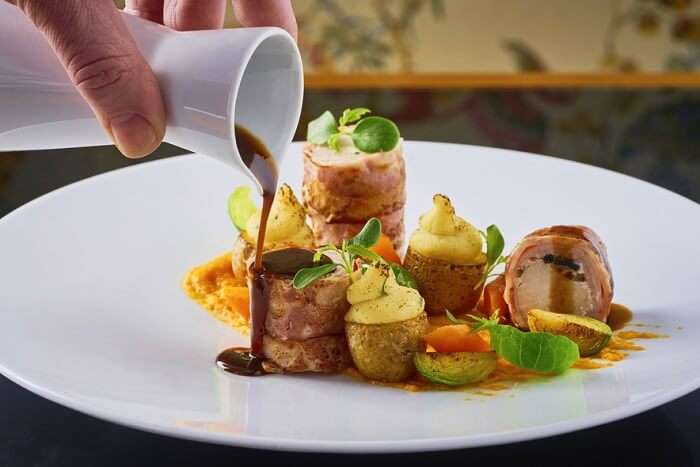 If you are somebody who enjoys fine dining, then you ought to check out these restaurants and experience what the hype is all about. Which of these amazing Michelin rated restaurants around the world would you like to dine at first? See what all they offer in terms of cuisine and what makes them so chic before taking your pick:

This is one of the top Michelin star restaurants around the world and is located in the beautiful city of Larrabetzu in Spain. It follows the vision of the highly acclaimed chef Eneko Atxa, who aims at giving the most unique experience to every visitor. This restaurant features a terrace garden where the diners can glance at the fresh produce which is used in the delicious food served here. The visitors are then taken into a greenhouse through the kitchen where the restaurant’s famous snacks are served. The edible cotton served here is popular among frequent visitors. After this, visitors can enjoy a hearty meal in the dining area. This highest Michelin star restaurant is also known for its eco-friendly ways of functioning.

Suggested Read: 6 Indian Restaurants In New York That Will Lure You To Get Desi In The Modern City

One of the most celebrated chefs of all time, Chef Joel Robuchon runs the show in this restaurant which is a gastronomic paradise. It is wonderfully situated in the Grand Lisboa hotel in Macau. This top Michelin star restaurant sits atop the 48 story hotel offering immense spectacular sights of the surroundings. Chef Julien Tongurian’s culinary creations are offered here in the most unique style. It is rated as the best restaurant in all of Macau which offers a variety of highly delectable cuisine with a refined sensibility. A Prestige Menu is also featured by this restaurant which includes imperial dishes like Caviar and King Crab.

Suggested Read: Winter In Spain: A Guide That’ll Help You Curl Up Amid The Country’s Eternal Charm In 2022

This restaurant earned its popularity due to the unique culinary techniques employed by Chef Heston Blumenthal, like multi-sensory cooking, food pairing, and flavor encapsulation. It was established in the year 1995 in a 16th-century cottage that was beautifully renovated to offer the most rustic and charming dining ambiance. One of the best Michelin rated restaurants around the world, this place is known for the 14-course tasting menu which features a variety of delicious dishes served in the most stylish way. The must-try food item here is the Turtle Soup which mocks Alice in Wonderland theme. The Chef’s talent is beautifully displayed in the dish Sounds of Sea which is famous among the frequent diners.

This restaurant located in Illinois, Chicago was founded by Chef Grant Achatz in the year 2005 and it soon gained popularity due to the uniquely featured dishes served here. It is the highest Michelin star restaurant. Chef Grant Achatz wonderfully showcases his talent through the unique preparation of deconstructed dishes. He employs a pretty unconventional approach to the idea of fine dining which sets this restaurant apart from the other restaurants in the area. This restaurant features molecular gastronomy in all the dishes served here which offers a delightful and surprising experience to every visitor. The must-try dishes at this restaurant include an edible balloon made with apple and the truffle-topped ravioli.

Distinct American cuisine is served in this world-class restaurant which is located in Manhattan. The creativity of Chef Daniel Humm leaves every diner astonished with excitement. This is one of the well-known Michelin rated restaurants around the world which offers a unique multi-course tasting menu. This menu changes every season according to the availability of fresh ingredients in the city. Only fresh seasonal ingredients are used to curate the world-class dishes at this restaurant. Diners can spend hours indulging in the 11-course tasting menu which forms an event in itself. The famous tasting menu offered here includes Foie Gras Terrine, Muscovy Duck, Bitter Almonds and Umeboshi.

This restaurant is run by the famous Chef Massimo Bottura who is well-known for being the writer of the international bestseller “Never Trust a Skinny Chef”. It is located in the beautiful city of Modena in Italy. Chef Bottura offers a variety of dishes from Italian cuisine with his own contemporary twist which gives the dish a unique taste and flavor. Classic Italian cuisine dishes can be relished here like the Tagliatelle, Risotto, and much more that makes it one of the best Michelin star restaurants in the world. Apart from the traditional Italian dishes, some of the famous delicacies offered here include Rabbit Macaroons and the Five Ages of Parmigiano Reggiano. These highly palatable delicacies are served in the most appealing way which lures in every food lover.

9. The Restaurant At Meadowood – California

This Michelin restaurant in California is located in Napa Valley and it features food that has elevated taste as well as presentation. The food served here displays the wonderful innovations of Chef Christopher Kostow who pays meticulous attention to detailing and uses only the freshly available seasonal ingredients. The menu at this restaurant changes frequently according to the season with new and innovative dishes being added to the menu frequently making it one of the top Michelin star restaurants in the world.

Suggested Read: 12 Places To Visit In California: A Short Trip To Experience Miniature America In 2022

Suggested Read: Get Ready To Chomp In 2022 At The 10 Best Restaurants In Zurich

Le Cinq is one of the top Michelin star restaurants in the world. Ever since its opening in 2001, it has rapidly gained accolades and appreciation from the food aficionados. The gourmet restaurant was initially headed by Chef Philippe Legendre before Chef Briffard took over in 2008. But it was the leadership of Chef Christian Le Squer that led to it receiving 3 Michelin stars in 2016. But is it the best Michelin restaurant in the world? Why don’t you go and find out?

Canon in Sacramento is located amid a serene ambiance away from the hustle and bustles of city life. This awesome site having contrasts of deep tones with bright whites and the flavorsome aroma is among the most popular places to eat in California. The famous chef Brad Cecchi is the mastermind of this place offering scrumptious delicacies prepared with love. This is amongst the most visited Michelin rated restaurants around the world.

Suggested Read: 8 Best Chinese Restaurants In Vancouver Which Will Let You Satiate Your Craving For Chinese Cuisine!

Trailblazer Tavern is located deep in the jungle and this interesting place by Michael Mina is surely a delightful place for the Epicures holidaying in San Francisco. The restaurant is known for Hawaiian cuisine prepared with Asian influences. This is one of the highest Michelin star restaurants.

Suggested Read: 10 Restaurants In Edinburgh That Serve The Most Delectable Cuisines In The City!

Popular chef Thomas Keller has introduced his culinary delights to Mexican food at La Calenda and this beautiful restaurant offers scrumptious delicacies cooked exclusively in his style. They don’t have a reservation policy but you can get a table for yourself in less than an hour by then you can check out their excellent house margaritas. This is surely among the most popular Michelin rated restaurants around the world.

Suggested Read: Dubai Cuisine: 26 Exotic Dishes To Try In 2022 That Serve As The Gate Pass To Heaven

Stockhome is another cheerful place to eat in the United States where you can head with your friends or loved ones to grab delicious food cooked by the renowned chef couple Roberth and Andrea Sundell. The place is often visited by locals who love munching meatballs and pickled herring. This is among the world’s best Michelin star restaurants.

Further Read: Savour These 10 Best Swedish Food Items On Your Next Eurocation!

These Michelin rated restaurants around the world are worth a visit by every gastronome who loves exploring the variety of flavorsome dishes of different cuisines and cultures. Contact TravelTriangle and plan a trip to these wonderful destinations to see what marvels they serve on your platter!

Frequently Asked Questions About Michelin Rated Restaurants Around The World

How many restaurants in the world have Michelin stars?

Which country has the most Michelin star restaurants?

Can you get 4 Michelin stars?

Michelin stars are a rating system used by the red Michelin Guide to grade restaurants on their quality. According to the Guide, one star signifies “a very good restaurant”, two stars are “excellent cooking that is worth a detour”, and three stars mean “exceptional cuisine that is worth a special journey”.

Does India have any Michelin star restaurants?

India doesn’t have Michelin starred restaurants because Michelin, at the moment, doesn’t award stars in India. For example, Yauatcha has a Michelin, but in London. That star is valid only for that particular restaurant and is not applicable anywhere else.

Is Indian Accent a Michelin star?

Michelin star has just started to look at India as a gastronomical experience. Presently Indian Accent at Lodhi Hotel and Oberoi Delhi Indian Restaurant is manned by Michelin star Chef. One of the items that Indian Cuisine lacks is presentation. Bukhara Delhi is world-famous.

Which Indian chef has the most Michelin stars?

The only Indian chef in the world to have won two Michelin stars, Gopinathan has been much-lauded for his unique Californian-Indian cuisine at Campton Place Restaurant at San Francisco’s Taj Campton Place hotel. He earned the coveted Michelin star six years in a row and went from one star to two in 2016.