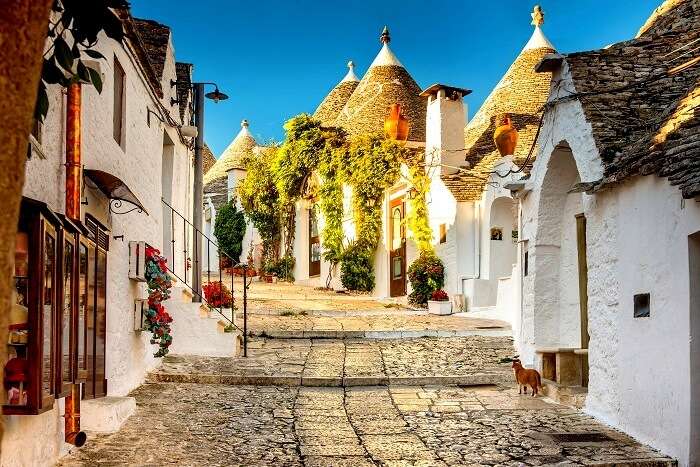 There is so much beauty around us, out there in the world, that it’s always difficult to keep calm and not head out. But what if we tell you that of all the innumerable places and neighborhoods on this earth, we came across 15 most beautiful streets in the world that would make you want to move there, and stay home all day long? Yes, we did. Believe us, these streets out par all, and are a clear winner when it comes to pleasing your eyes or melting your heart.

And even if do not get to live there, don’t be sad. You could still visit them during your holiday and click some wow-worthy pictures for your Instagram.

15 Most Breathtakingly Beautiful Streets In The World

Apart from being amongst the top romantic places for honeymooners, Mykonos is also home to a town street that has whitewashed houses along with blue railings and green foliage around them. The narrow lanes between the houses make the whole neighborhood look even classier than you can see in the picture right now.

You might have already heard about Agueda’s Umbrella Sky Project that took over social media by storm once. If not, you’ve missed out on a gem. The narrow streets get enveloped in vibrant umbrellas as the temperature rises in the city to offer a respite from the heat to the pedestrians. The result? An impeccable colorful street, which is now famous as one of the most beautiful streets in the world.

Located in the Rif mountains in northwest Morocco, Chefchaouen has been long famed for its signature blue walls, handicrafts, and cannabis, but most importantly for its pretty artistic streets. Signifying spirituality, all the houses in the street have colored plant pots displayed next to the door, adding to the charm of the already gorgeous city.

Colorful painted houses with a canal in the middle is exactly what makes the street of Burano a dreamy place to live in. If you’ve had your fascination with the pictures of Venice for a long time, there are chances that most of them were clicked in Burano. Though the idea behind painting the houses there was not to make the street look vibrant, but to distinguish one’s home from another’s. But, if the result turned out to be this beautiful, who cares?

Suggested Read: 50 Places To Visit In India Before You Turn 30

There can be no list of the most beautiful streets in the world that would not have the Cherry Blossom Avenue of Bonn mentioned in it. Acting as a heavenly wrap around, this happy street gets more lit up during the annual Kirschblutenfest, which is known for its live music and lip-smacking local food stalls. If not fortunate to live there, make yourself lucky by clicking pictures and taking a long stroll with your loved one.

Popular as one of the most visited sites in the city, Lombard Street is a fun-filled street that looks right out of a storybook. The hairpin turns, the steep hill, and the lush greenery around makes it outshine most of the places in the world. Though, the turns were made with an aim to ensure that drivers slow down their cars while driving around this area.

Covered with blooming Jacaranda trees for most months of the year, this is certainly one of the most beautiful streets in the world that looks no less than a fairytale land. Be it driving through it or living in a house near it, you wouldn’t feel like leaving this purple paradise once you enter it.

The old town of Brienz in Switzerland has homes that are partly made of wood, and partly with brick. But what adds charm to their overall beauty are the colored foliages and flowers planted right on the outside of the homes, and at the edge of their balconies, which make them look like a picture from an old storybook.

This is not completely a street, but a little neighborhood in Buenos Aires that reflects the lifestyle of the 19th century through its beauty. There are brightly painted houses built in the European architectural style, which makes the street as famous as it is today. Also, it has been named after a popular 1926 tango song, trying to keep the charm intact.

Known for its Trulli, whitewashed stone huts that have conical roofs, the streets of Alberobello reflect the Italian class and elegance at its best. The whole street looks so spectacular when put together in a composition that it would be difficult to take your eyes off. Another major highlight of this picturesque street is that you can witness sunset right behind it.

Suggested Read: 15 Most Romantic Places To Propose For Getting A Definite ‘Yes’

Situated on Lake Hallstatt’s western shore in Austria’s mountainous Salzkammergut region, the streets of this village look like a winter wonderland when the snow falls, and takes one back in time to 16th century when the sun shines over. The alpine houses set up right one after another are also what makes it count amongst the most beautiful streets in the world.

Also known as a fairytale village in Alsace, Colmar has a street, which is like a dream come true. The lush green foliage and flowers around the pastel colored houses situated across the canal look so pretty that you wouldn’t believe your eyes first. Apart from its beauty, the street also offers a never ending voyage kind of an experience that is enough to soothe your soul.

13. The Shambles in York, England

Suggested Read: These 10 Best Floating Hotels In The World Are Perfect For Those Who Don’t Wanna Stay Still

One of the most picturesque streets in the world, and especially in England, The Shambles has 15th-century buildings, and narrow, cobblestone lanes. It isn’t only amongst the oldest streets, but also the one that well preserves the timber-framed architecture as a mini time capsule. The buildings would remind you of the old-school English movies and make you wish how great life would have been, had you lived there.

The Golden Lane is a stunning example of a street that would leave anyone amazed who treads along it. Located in the heart of the Castle enclosure which overlooks Prague, you would have to bend your back slightly and lower your head to enter one of the typical and picturesque houses built on the street.

15. The Philosopher’s Path in Kyoto, Japan

Suggested Read: 15 Picturesque Places In India That Will Glam Up Your Instagram Profile

Also known as Tetsugaku-no-Michi, this walkway does not house any homes, but after looking at it you would surely wish that it did. The pink and white cherry blossoms set along the Lake Biwa Canal in Kyoto, along with the tree-lined up on the 1.2 mile street make it a paradise in the city, which is perfect for enjoying some tranquil time with oneself.

So, which of these streets do you think have the magic of keeping you glued to it all day long? Do tell us in the comments below!