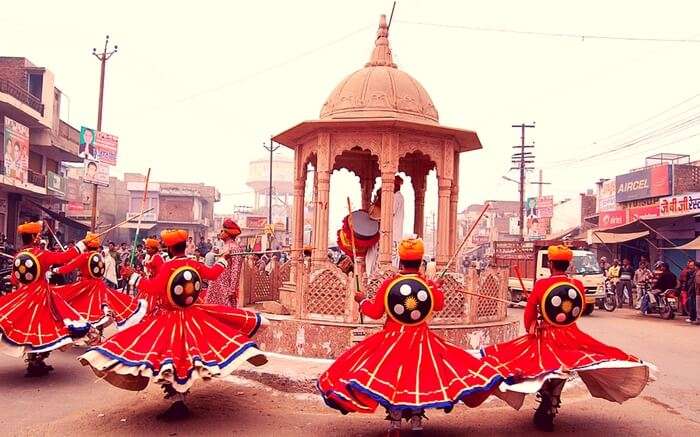 Imbued with tradition and rituals, the Mount Abu Summer Festival is an annual celebration of the cultural and tribal identity of Rajasthan. It is one of the most popular festivals of Rajasthan. This cultural extravaganza is a collaborative effort by Rajasthan Tourism, Municipal Board, and Mount Abu and District Administration. It brings to the fore the warm hospitality and cheerfulness of locals. The lively culture and exotic location make this event an unforgettable experience. The festival is replete with boat races, ballads, folk dances, competitions, and fireworks.

Mount Abu happens to be the only hill station in Rajasthan. The hills in the background, surrounded by craggy rocks and tranquil lakes, bring this cultural extravaganza to life. Our guide will apprise you with the dates of Summer Festival in Mount Abu, a brief itinerary of the two-day fest and how to reach Mount Abu.

This year, the two-day Summer Festival in Mount Abu, Rajasthan will be celebrated on the 17th and 18th of May. It is held every year during Buddha Purnima, and is celebrated with great fervor among Hindus and Buddhists. The Indian summer typically begins in March and lasts until June. Having said that, Mount Abu in May is not very hot. It is a year-round destination. The temperature in Mount Abu ranges from a minimum of 23°C to a maximum of 30°C. The days are pleasant and nights are generally cool.

The festival is interspersed with a wide range of exciting activities and competitions that are held throughout the day. We have shortlisted 5 happening things to do on your visit to Mount Abu Summer Festival:

Rajasthani folk music is a treat for your ears. The musicians at Summer Festival in Mount Abu, India take pride in singing ballads of forgotten heroes like Devnarayan Bhagwan, Gogaji, Ramdeoji, Pabuji, and Tejaji. The songs may vary according to the season unfolding in Rajasthan as the celebration of changing seasons is also central to folk music here.

Must Read: 10 Engaging Things To Do In Mount Abu: Boating, Trekking, Camping & More

Among the folk dances performed at Mount Abu Summer Festival, Ghoomar is the most popular. Ghoomar is a quintessentially Rajasthani folk dance. It is performed by an all-women crew. The women wear traditional outfit, which is ghagra and kanchli or choli. The coordinated movements and the upbeat music leave the spectators mesmerised.

Suggested Read: 8 Villas In Mount Abu That Are Beautiful & Luxurious

The Boat Race at Nakki Lake carries mythical importance. If legend is to be believed, the Gods formed the lake bed by digging it with their fingernails. Nails are called Nakh in Hindi language, hence the name Nakki Lake. A vast majority of the locals participate in the boat race. To get yourself registered, reach the venue in advance and dress as per the activity.

The second day of Mount Abu Summer Festival attracts more crowds than the first because as various competitive events are organised throughout the course of the day. Skating Race, Horse Race, Tug of War and Panihari Matka Race arouses a sense of competitiveness and boisterous enthusiasm in all the participants. Make sure to participate in at least one of the events.

The CRPF Band performance is popular among locals and tourists alike. It is an integral part of Summer Festival in Mount Abu, Rajasthan. The band show give a chance to all of its ranks to participate and display their musical talents. Every year, the performance is no less than enthralling.

Places To Visit In Mount Abu

Whether you are looking for adventure or a calm place with amazing views, you’ll be thoroughly pleased with the tourist attractions in Mount Abu. The places to visit in Mount Abu that should be on your itinerary are Adhar Devi Temple, Trevor’s Tank, Achaleshwar Mahadev Temple, Gaumukh Temple, Brahma Kumaris World Spiritual University and St. Saviour’s Church. The Dilwara Jain Temples are a must-visit because of the brilliant use of marble in its architecture. The ornamental carvings and the smooth stone laying technique make it one of the most beautiful pilgrimage spots in the world.

How To Reach Mount Abu

If you plan to attend the Mount Abu Summer Festival, you would definitely want to know how to reach Mount Abu. Reaching Mount Abu is not a hassle as the destination enjoys excellent connectivity with neighboring states through various means of transport. Here are the various means by which you could reach Mount Abu:

By air: The nearest airport to Mount Abu is Maharana Pratap Airport, also known as Dabok Airport of Udaipur, which is located at a distance of 176 kilometers from Mount Abu. The airport is well-connected with Indian metro cities. Regular flights connect the airport to important Indian cities such as Jaipur, Mumbai, and Delhi. You can book a cab or a taxi to go to Mount Abu from the airport.

By train: Mount Abu does not have a railway station. To reach the hill station by train, you will have to get down at the nearest railway station to Mount Abu which is Abu Road railway station. It is located at a distance of just 28 kilometers from the main city. Trains to a number of major stations such as Bangalore, Hyderabad, New Delhi, Chennai, Ahmedabad, Pune, Mumbai, Jaipur, Dehradun, and Trivandrum operate from here.

By road: Being the only hill station in the state, Mount Abu has a good network of roads. The nearest national highway is NH 14 at a distance of 24 kilometers from the hill station. Mount Abu has motorable roads that connect it smoothly to several major cities like Delhi, Bundi, Udaipur, and Ajmer.

Since Mount Abu Summer Festival is just around the corner, we urge you to book a trip to Rajasthan with TravelTriangle to avail exciting deals and discounts. This event is celebrated with great enthusiasm and spirit every year, and we’re sure that you’ll enjoy the activities and competitions held during it. The hills are calling and you must go! Don’t forget to tell us about your experiences in the comments section below.

Q. What is the Mount Abu Summer Festival?

A. This festival is filled with traditions and rituals and it is the yearly celebration of the cultural and tribal identity of Rajasthan. The festival is all about boat races, ballads, folk dances, competitions, and fireworks.

Q. What are the dates for this festival?

A. It is held every year during Buddha Purnima and is celebrated by Hindus and Buddhists equally.

Q. What are the competitive events that take place?

A. There are a lot of competitive events like the Skating Race, Horse Race, Tug of War and Panihari Matka Race which makes all the participants take part in and join the summer festival.

Q. What is the best time to go to Mount Abu?

A. The peak tourism season is in the winter season and the best time to visit is in November month to June month.

Q. How is the weather in Mount Abu in June?

A. The summer season lasting from April to June is not very hot. The temperature keeps on ranging from 23-33 degrees centigrade.

21 Honeymoon Places In Rajasthan That Are Perfect To Sweep You Off Your Feet In 2021!