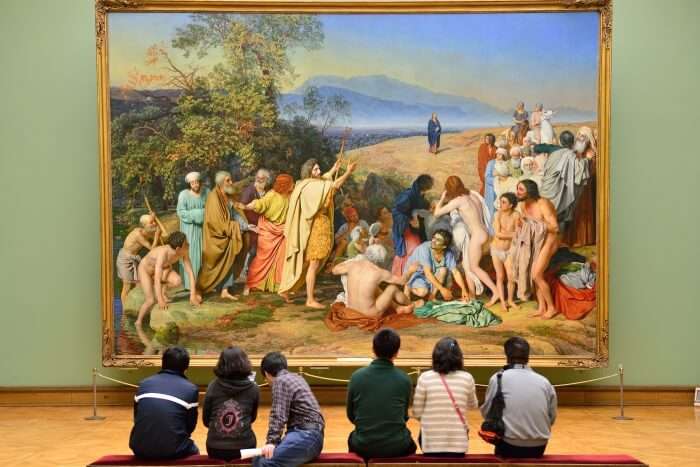 Moscow is one of the most popular cities in the world and is renowned for the Kremlin (the largest fortress in the country) and the Red Square (the deciding site of the fate of Moscow in the Second World War). When visiting Moscow, one of the first things that tourists look for are the museums in Moscow. Moscow is packed with unique and different Museums that are the pride of the city.

While it is true that Moscow is packed with awesome museums, there are some that stand above the rest. Keep scrolling to see our pick of the best museums in Moscow:

This is undoubtedly one of the best museums in Moscow, as it is what one would call a treasury. Complete with guards, and added security for each exhibit, this famed museum houses more than 180,000 individual pieces of art, with hundreds, if not thousands, of famous paintings, hailed and famed pieces of sculpture and other famous artifacts from Russian history. Featuring hundreds of individual and generations of artists, this museum in the heart of Moscow is guaranteed to take your very breath away from your body.

Definitely one of the top museums in Moscow, The Armoury is one of the most famous museums in the city that favors an overall military theme. Inside the museum, one can see many sights and objects that are otherwise impossible to see, such as the ancient (or recent) thrones of tsars, sure to be an exciting sight, medieval arms used in Russia which make one imagine about the great battles, and famous Russian paintings and sculptures.

Definitely the most known Museum on this list, the Moscow Museum of Modern Art is famous all over the world, as it houses the largest and most influential and widespread collection of art and artifacts from all around the world. Featuring items from the glorious past of Russia, this museum is visited daily by hundreds of people, both native and foreign, looking to learn more about Russia’s past and styles of art.

This is undoubtedly one of the most attractive museums in the whole of Russia and is definitely one of the museums to visit in Moscow. It is centered on the history and tolerance of Jews in Russia- what they went through for a peaceful life, how they fought to preserve it, and their present struggles. This museum features cutting-edge technology that displays the exhibits in a unique and interactive manner, designed to stimulate the senses. Described by many to be a heart-warming museum, this is a true monument to the resilience and determination of Russian Jews.

6. The Museum of History of Moscow

This museum in Moscow is often called the Museum of History of Moscow, is another one of the well-known entities on this list. Established in 18896, on the initiative and frequent urging of the Russian Scientific Community. It is one of the oldest entries on this list and features many prominent and significant artifacts from Russia’s past. As it frequently undergoes repair and renaming, its present name is the Museum of History and Reconstruction of Moscow.

This is also another one of the well-known fine arts museums on this list. The Pushkin State Museum of Fine Arts is probably the largest and most well-known collection of European art in the city of Moscow. It can be found just opposite the Cathedral of Christ the Saviour. Since 1981, one of the most famous annual music festivals in Russia has been held in this museum, a fact that does not even come close to the awesome exhibits housed here. Pushkin museum is one of the only museums that are old enough to be called a Soviet Museum in Moscow.

8. The State Museum of Oriental Art

While this is not as well-known as the other museums on this list, it is still a pretty amazing museum in and of itself. It has a large number of rooms, with large ones dedicated to specific Asian countries or artists. Larger countries like India and China have a number of smaller rooms dedicated to them, paintings and everything one could think have included in the exhibits. This out of the way museum also houses some of the finest pieces of Roerich’s work in Moscow.

9. The House of Victor Vasnetsov

Anybody who researches the most famous museums in Russia will not find this house on the list. This is because this is one of the most off the beaten path museums on this entire lists, and does not house a collection of artifacts from many artists. This is because this was the house of Victor Vasnetsov, one of the most famous artists of Russia. Instead of housing a multi-artist collection, this museum is dedicated to the life of the Russian artist, showcasing important events from his life.

This was the home of one of history’s most famous, widespread and well-reputed authors, Leo Tolstoy himself. While it does look quite out of place in the modern surroundings, the wooden house itself is not only a reminder of what poverty in Russian medieval times meant but also a haunting reminder of what the writer and his family had to go through. Though one has to wear plastic bags over their shoes inside the house to protect the ancient wooden floor, the house has a rustic feeling, and is a great sight to see!

There is a good reason why museums in Moscow are one of the best places to visit in the city. Moscow places special importance on its history, as the city itself has hundreds, if not thousands, of museums and preservations that pertain to not one, but just about every single part of Russian history. So, on your trip to Russia, make sure you check them out!

Q. How many museums are there in Moscow?

A. There are as many as 45 museums in Moscow.

An All-In-One Post-Covid Travel Guide To Russia: Your Pocket Guide To Explore The Grand Paradise Safely