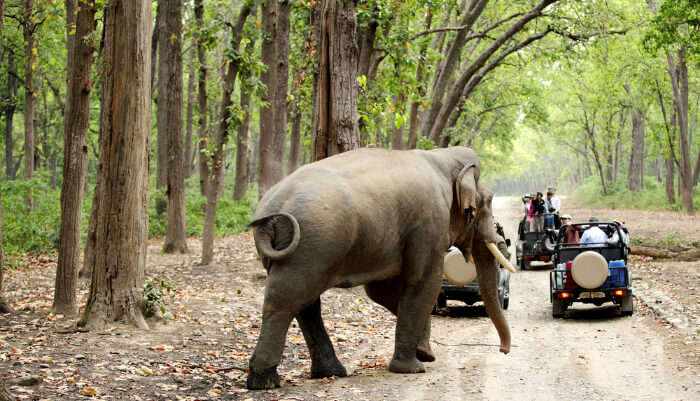 It is quite interesting that India has the third-highest number of National Parks in Asia, after China and Thailand, with a count of 103 diverse National Parks throughout the country. This makes the Indian subcontinent a place worth exploring. The popular National Parks near the capital city of Delhi can’t be ignored while customising one’s itinerary. Have a look at how this region is surrounded by such exemplary places that are perfect places for nature lovers to feel and enjoy nature’s bounty. Read on to know the best national parks near Delhi.

The listicle below enlists the 7 most popular national parks which one should visit at least once in their lifetime. These national parks near New Delhi India are great destinations for family travellers and especially those who are traveling with children as they enjoy such trips the most.

Sariska National Park is one of the famous national parks close by Delhi. This reserve is popular for the Bengal Tigers along with other species of wildlife like leopard, Indian jackal, sambar, nilgai, chinkara, jungle cat, caracal, striped hyena, four-horned antelope and wild boar el al. Sariska National Park is also famous for bird watching with some of the rare-feathered species including grey partridge, bush quail, golden-backed woodpecker, crested serpent eagle, white-throated kingfisher, Indian peafowl, and Indian eagle owl to name a few.

Key Attractions: Bengal Tigers, Pandupol, Turtle sighting, beautiful flora and fauna, Kalighati, Hanuman Temple of Pandupol, Sariska Palace, Bharatrihari Temple, Kankwari, Kankwari Fort, Ajabgarh Fort, Neelkanth temple.
Things to do: Bird Watching, Jungle safari
Weather: The climate varies and March to June is the hottest. July to September, the region witnesses occasional rains. Sometimes, there is no rainfall at all. In winters from October to February, the climate is dry with cool and pleasant atmosphere.
Places to stay: Sterling Sariska Resorts and Hotels, Sariska Palace, Utsav Camp Sariska, Tiger’s Den Hotel.
How to reach: You can reach this National Park by air, train and road routes. The nearest airport and railway station are Jaipur Sanganer Airport and Alwar Railway Station respectively. This park is well connected by road. Buses operated by the Rajasthan State Road Transport Corporation (RSRTC) as well as Private Operators ply buses to and fro this park and the nearby areas.
Distance from Delhi: 202.6 km.

Must Read: 32 Best Street Food In Delhi You Must Try In 2021 That Is Worth Every Calorie!

This is one of the best national parks near Delhi. Popularly known as Bharatpur Bird Sanctuary, it is also called Keoladeo Ghana National Park. The name Keoladeo is derived from an old Hindu temple which was dedicated to Lord Shiva. This sanctuary has a rich heritage of both flora and fauna. The park attracts attention of visitors from different parts of the country, especially birdwatchers.

Key Attractions: Rich fauna, Migratory Birds, Lohagarh Fort, Government Museum Bharatpur, Bankey Bihari Temple.
Things to do: Jungle Safari, Birdwatching
Weather: Warm and temperate climate. The average temperature remains around 24.7 degrees.
Places to stay: Bharatpur Forest Lodge, Hotel Lakshmi Vilas Palace, Hotel Sunbird, The Birder’s Inn, The Bagh Resort, The Kadamb Kunj Resort, Hotel Sonar Haveli, Hotel Surya Vilas Palace.
How to reach: One can reach here by air. The nearest airport is in Agra whereas if one is traveling via road, then it is connected to Agra, Delhi and Jaipur routes. You can choose to travel by railways and the nearest railway station is Bharatpur Railway Station approximately 5 km from this famous Sanctuary.
Distance from Delhi: 224.2 km

Suggested Read: 40 Hill Stations Near Delhi One Must Visit In 2021 For A Peaceful Getaway!

Rajaji National Park is situated along the foothills of the Shivalik ranges and exhibits the Shivalik ecosystem. It is one of the richest national parks near New Delhi, India. It is an amazing place to visit and explore nature’s richness. A haven for nature lovers and photographers, one can witness herds of elephants, hornbills, sambhar and other species of spotted deer in this park during their visit.

Key Attractions: Elephant Sighting, Eco-tourism
Things to do: Jungle Safari, Rafting, Bird watching
Weather: Warm and temperate. Average temperature is around 16 degrees
Places to stay: V-Resorts- Rajaji National Park, Roost Aaryan Manor, The Palms Resort.
How to reach: It is accessible from Haridwar, Garhwal and Dehradun via buses and taxis. The nearest airport is Jolly Grant, Dehradun while the nearest railhead is at Haridwar.
Distance from Delhi: 237.2 km

Suggested Read: Getting Married? See These 17 Best Locations For A Pre Wedding Shoot In Delhi NCR In 2021

Jim Corbett National Park is a beautiful site and also one of the oldest national parks near Delhi. Jim Corbett is a great destination which is visited by tourists in great numbers from all over India. In Jim Corbett, one can easily spot endangered animals, and attractive fauna and flora. The weather is pleasant and there is quite a lot to explore here, especially the hidden treasures of nature.

Suggested Read: The Ultimate Guide To A Kickass Nightlife In Delhi In 2021

This National Park was established in 1989 and sprawls over an area of 2,390 km². The park is named after Gangotri, one of the four pilgrim sites of Char Dham. The enchanting beauty of this national park is highlighted by the snow-clad mountains, eye-catching springs and dense-green forests around it. Here any development activities, forestry, poaching, hunting, and grazing on cultivation is not allowed. It is one of the national parks that are close to Delhi.

Key Attractions: Rich Flora and Fauna, Dense forest, Gangotri Glacier, Surya Kund, Divya Shila, Janaki Chatti, Badrinath, Ukhimath.
Things to do: Hiking, Jeep Safari, Paragliding, River Rafting, Mountaineering, Skiing and Trekking,
Weather: Cold for most part of the year.
Places to stay: Mahima Resorts, Hotel Shantikunj, New Basera Hotel, Hotel Him Ganga.
How to reach: You can easily travel to Gangotri National Park, Uttarakhand by air, rail or road. The nearest airport is Dehradun Airport and the nearest railway station is Dehradun Railway Station(210 km). This park is well connected to the major cities and places by road network. It is accessible by the route 108 which passes through Uttarkashi district.
Distance from Delhi: 318 km.

Suggested Read: 32 Best Romantic Places In Delhi And Its Vicinity That All Couples Must-Visit In 2021!

It is one of the most famous and globally recognised national parks in India which is close to Delhi at a distance of approximately 393.6 kilometres. This park has the distinction of being the biggest national park in Northern India. It is equally famous for the best tiger spotting locations in the country. The Ranthambhore National Park has a total of ten different safari zones, therefore, it greatly boosts tourism in the region.

Binsar Wildlife Sanctuary is a paradise for nature lovers and bird watchers. This sanctuary has a large population of Jays, Blackbird, cibias, Himalayan owls, Bee catchers, turtleback doves, woodpeckers, peregrine falcons, and serpent eagles besides jungle fowls. Binsar Wildlife Sanctuary is on the top of the Jhandi Dhar Hill which makes it a picturesque destination. And, from the Zero Point, visitors can see the Himalayan Peaks of Kedarnath Peak, Shivling, Trisul and Nanda Devi amongst others.

Further Read: 25 Best Cafes In Delhi You Must Visit At Least Once In 2021! Which Ones Have You Been To?

National Parks are nation’s pride in any country and National Parks in India have attained the identity of some of the popular ones on a global standard. Above mentioned 7 National Parks near Delhi are a major attraction with people from all over the country. Book a trip with TravelTriangle, and have an amazing vacation amidst wildlife and greenery.

Q. Which is the oldest National Park in India?

A. The oldest National Park in India is the Jim Corbett National Park. The aim of this park was to protect tigers from being poached.

Q. What is the best time to go to Jim Corbett?

A. The best time to visit Jim Corbett is between November and February which are the winter months. It is during this period that all zones remain open. And, most of the animals can be spotted.

Q. When is the Jim Corbett Park closed?

A. The Jim Corbett Park is closed during the monsoon season.

Q. What is the best time to visit the Bharatpur Bird Sanctuary?

A. The best time to visit Bharatpur Bird Sanctuary is from August to November.

Q. What is the best time to visit the Binsar Wildlife Sanctuary?

A. The best time to visit the Binsar Wildlife Sanctuary is from February to April and October to November.

Q. What is the best season to visit various places in Sariska, Rajasthan?

A. The best time to visit Sariska, is from October to February.

Q. Which are some of the other National Parks near Delhi?

17 Hidden Places Of 2021 In Delhi That Have Aged Gracefully Without Losing Their Charm!