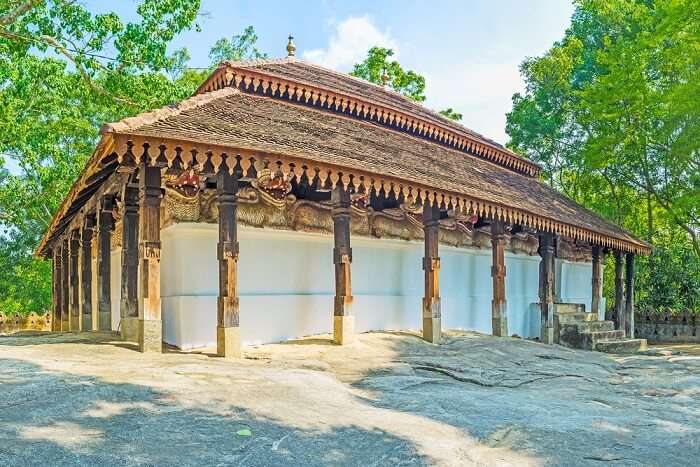 One of the major cities in Sri Lanka is Kurunegala. It is the capital of North Western Province and falls in the Kurunegala district. From the end of 13th century to the beginning of 14th century, Kurunegala was considered as the royal ancient capital of Sri Lanka for around 50 years. Kurunegala got its name from the giant rock which is elephant shaped that is located in the place, making it one of the major tourist hubs.

There are various places to visit in Kurunegala district, all with a different history. This city is located at an altitude of 116 m above the sea level. So, take a look to know what awaits you in this scenic land.

8 Best Places To Visit In Kurunegala

The temple got its name as the silver temple because it has been built on a rocky outcrop over a mine which is of silver. There are two shrines which are superimposed and partly carved out of the rocks. They make up the Silver Temple which is also known as Ridi Viharaya and it was first built by King Duttu Gemunu in the 2C BCE. There are many caves in here and in one cave there is a long reclining idol of Buddha which has an approximate height of about 9 m. The walls of the temple are covered with paintings which depict divinities. A person could enjoy the spectacular view of the mountain range of Knuckles from dagoba at the top of the hill.

Munneswaram Temple is considered to be one of the most important sanctuaries in Sri Lanka which has been devoted to Shiva. It is believed that Durga is invincible, Shiva teaches wisdom and Vishnu is the protector. It is considered to be the home of the medieval sculpture of Hindu Pandya who reigned in Southern India. This temple is a pilgrimage during the time of full moon in the month of February and the ending of August. There is a competition in which devotees take part where they have to break the open coconuts as offerings on the sacred rocks.

There is a huge lion staircase which leads to the temple of Buddha with a sacred tooth relic. These stairs are half-way up to the hillside and they are considered to be a masterpiece of the citadel of Yapahuwa but unfortunately, now they are in ruins. The granite rock which emerges from thick vegetation against which the fortress of Bhuvanekabahu I has been built was earlier a lower town and a palace. Now it has become a striking site which provides an excellent view of the countryside which surrounds it.

This place is usually out of the sight of tourists as it is very far from the track of tourists. There are a royal palace, two monasteries and a dagoba ramparts which is all in the countryside and is hidden. These places are all that has remains of Panduwasnuwara which was the capital of Land of the South in Sri Lanka. It has been built by Parakrama the Great in 12C. The temple of sacred tooth relic has been restored and maintained outside the ramparts. There is a small museum here in which the artefacts from the site are preserved and displayed.

Arankele Monastery is located in the heart of Arankele forest. It is a Buddhist monastery and it has been established in 6C. As it is situated in Arankele forest, it got the name Arankele Monastery. The community of monks who lived in this monastery was living in almost utter destitution and this idea could be obtained by the immense ruins. The monks living in the forest were disconnected from the modern civilization and they were living under strict precepts. They lived their life on the path of meditation.

It is located in the Gokarella village of Kurunegala district of Sri Lanka. It has earned a great level of reputation in the world because of the ancient inscriptions that are engraved which are very valuable and they are all regarding peace. Originally the inscription is a peace agreement. This temple has been situated on a rocky hill which is facing Meddekitiya were on the west side. There was a time when two different parties gathered at the place for a war and they understood the uselessness of such a battle and they decided not to fight against each other and they wrote it on a rock slab. This battle was between King Gajabahu 2 and King Parakramabahun 1. The translation, as well as the original inscription, could be found on the rock mountain.

This Viharaya is located in the North Western Province of Sri Lanka. There are many fascinating antiques in this place. Kurunegala city is known to be the birthplace of many interesting legends in the world. Th Buddhist temple has been preserved and maintained very well. Due to this reason, there are more and more local as well as foreign travellers visiting this Viharaya.
It was a royal capital of Sri Lanka in ancient times. The temple was the home of a legendary giant, Therapuththabhaya who later on became a Buddhist monk. He was among the 10 giants of the army of Great King Dutugemunu.

The cultural heritage of Kurunegala which was once the royal capital of Sri Lanka could be seen by the travellers by discovering its natural beauty and the diverse culture. The Elephant Rock’ or we can say Ethagala Rock’ is a very unique feature of Kurunegala town. The rock has a height of 325 m and a person would have to travel a distance of 2 km to reach the top of the rock. The other option is to take the natural pathway or the main road which is adjacent from top to bottom. The whole area is an eco-tourism destination and there are several adventure based activities also available. There is a mythical legend which says that the city of Kurunegala was bordered with a very severe drought in the olden time.

Further Read: 9 Alluring Things To Do In Nuwara Eliya, The Heart Of Sri Lanka!

Kurunegala district is a great place that has many tourist attractions. There are various places to visit in Kurunegala and the number of tourists visiting this place is increasing every year. It is a worth visiting place, so go ahead and plan a trip soon! So, plan your trip to Sri Lanka for a memorable holiday with your loved ones!

20 Hottest And Coldest Places In India Which Will Let You Witness The Extremities Of The Country In 2020!