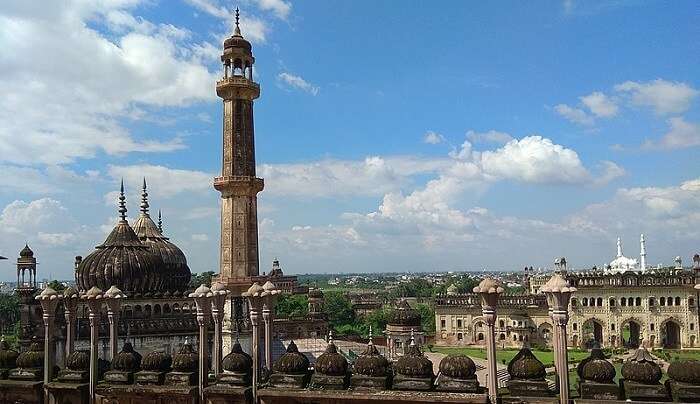 What defines the city of Lucknow is its past that converted into a great present – which later laid foundations for the future – The NOW! The city gained prominence in the 18th century Mughal rule and flourished under the Nawabs. We are talking about a culture that has survived over the years and one that has clearly left a mark at all the places to visit in Lucknow.

It’s development, not just of the infrastructure but development in terms of architecture, religion, art and culture – one that is the true binding force of Lucknow. You will get the sheer cultural generosity in Lucknow’s food, establishments, monuments and people!

We’ll go over a few awesome places, some facts and how to reach the “city of Nawabs.” Read on!

12 Best Places To Visit In Lucknow

So, here is a list of places to visit in Lucknow that will give you the opportunity to explore a dominant culture that once prevailed in the country. On top of that, the modern Lucknow sightseeing destinations have been built to accommodate the modern demands of the people. Scroll below to know more about Lucknow:

Bara Imambara is a striking monument that distinguishes itself from all the famous places in Lucknow. The historical landmark is a big complex consisting of the Asfi Mosque, the Bhul-bhulaiya and a Bowli. The Bowli (or maze) is the most popular part of the complex. The architecture resembles the ornamented Mughal design which does not include the use of iron or European architecture.

Must Read: Privately Run Tejas Express From Lucknow To Delhi Is The First In India

Also popular as the Nawab Wajid Ali Shah Zoological Garden, it is a place to catch hold of some natural splendor within the city. Out of all the amazing tourist places in Lucknow, the zoo will help you discover the beautiful wild nature. The zoo was inaugurated on 29 November, 1921. There are plenty of ways to explore the zoo including walks, boating, battery vehicle, toy train ride and plenty more attractions. You can spend about 4-5 hours without looking at your watch.

Ambedkar Memorial Park is a public area and memorial dedicated to Dr. B. R. Ambedkar. One of the finest tourist places in Lucknow, the park is spread across a massive 107 acres while the monuments inside are made with red sandstone from Rajasthan. Several monuments inside include Ambedkar stupa, a sangrahalay, a photo gallery, pratibimb sthal, and the drashya sthal.

The Residency is a group of several buildings in a residential complex from the Nawab era. Built during the rule of Nawab Saadat Ali Khan II, the residency was part of the 1857 siege of Lucknow. Although, currently in ruins, the cannon shots and shattered walls tell the story of war. The ruined buildings are now surrounded by flower beds and lawns making it one of the famous places in Lucknow for tourism.

Suggested Read: Agra Fort: A Complete Guide To Explore The Marvellous And Historic Monument In 2022!

Welcome to an urban park in the city meant to rejuvenate the city people. As a tourist, the park would act as a pleasant gift to you. Situated at the city’s heart, the park is conceptualized as an eco-friendly zone. With a vast area, it is one of the largest parks in Asia and one of the best places to see in Lucknow. The recreational greenery near the Gomti river will make you fall in love with the place.

Wouldn’t you say, you want to learn about some very ancient history. Then here is one of the finest places to see in Lucknow that is perfect for that. The four-storey Lucknow state museum has some of the finest displays from the stone age, exhibits and galleries showcasing Jain art, sculptures, archaeology, Nawabs and ancient coins. Read enough? The history enthusiasts will very much love this place and so would the general tourists and college children.

Suggested Read: 20 Unbelievable Experiences In India That You Must Add On Your Bucket List To Enjoy An Offbeat Escape In 2022!

Ok! Let’s forget the history for a second, although it’s too prominent in all the places to visit in Lucknow. Have you heard of Hazratganj? Well, it’s a downtown area of the city and apart from the bustling markets and bazaars, you will find lip-smacking Mughlai cuisine, movie theaters, entertainment zones, hotels and some of the best restaurants in Lucknow. While you will find a lot of traditional apparel to buy, you will also find lots of bookshops. The historical buildings also add another dimension to Hazratganj.

Suggested Read: These Richest Cities In India Let You Witness The Best Of Modern Lifestyle & Old World Charm In 2022!

Your Lucknow sightseeing is incomplete without visiting the popular Jama Masjid. How else will you learn more about the culture that’s being immensely dominated in the city over the years. Take this 15th century architectural wonder with sparkling white sandstone calligraphy on its walls, charming minarets and picture-perfect domes. With over 260 pillars and 15 arched domes, the intricate stone work and carvings makes it one of the finest mosques in India.

Suggested Read: 60 Best Hill Stations In India In 2022 That You Must Explore At Least Once In Your Life

Time to take another break from the striking city culture. Visiting with family, here to convince you is indeed one of the best places to visit in Lucknow that will definitely attract your kids. The very awesome Anandi Water Park is a recreational zone with thrilling rides, water slides, a wave pool and a lazy river. With a massive fun area and an even bigger resort and club area, it is one of the biggest water parks in India.

The Sikander Bagh is another reminder of the brutality of the “Siege of Lucknow” – which was once the summer residence of the Nawab Wajid Ali Shah. Although it is called a garden, the 120 square yards also houses a villa, some loopholes, a gateway, fortified walls and corner bastions. It might have a violent past but with the Botanical Garden and National Botanical Research Institute, open areas and benches at its centre, it is one of the finest places to see in Lucknow.

The heritage trail of the Nawabi city never ends! Welcome to Chattar Manzil, another remarkable monument in Lucknow otherwise known as “Umbrella Palace.” It used to be the palace for the Awadh rulers and their wives. The monument is an amalgamation of the Indo-European-Nawabi architectural style. The umbrella-shaped domes and large underground rooms are really intriguing making it one the finest architectural places to visit in Lucknow.

Suggested Read: 14 Vibrant Festivals In August In India: Save The Dates To Rejoice In 2022!

The Gomti Riverfront Park is another amazing Lucknow tourist spot that is meant for pure rejuvenation. Situated on the banks of river Gomti, the very lush and aesthetically pleasing attraction makes for a wonderful stroll or picnic. The musical fountains at night, an amphitheater, dedicated biking area and jogging tracks and boating opportunities definitely make this park a crowd-pleaser.

Suggested Read: Visit 14 Luxury Holiday Destinations In India For A Lavish Stay In 2022!

Here are some brief facts about Lucknow which are as interesting as surprising. We are sure of them will pop your eyes out:

How To Reach Lucknow

You may reach this amazing city by 2 big modes of transportation including flights and rail. Being the capital city of Uttar Pradesh, there is no problem in reaching this city:

By Air: The Chaudhary Charan Singh International Airport is the major airport serving domestic and international carriers. Regular connecting flights ply from all major parts of the country.

Further Read: 30 Unexplored Places In India That Will Totally Stump You In 2022!

So, in short, the heritage and culture is fully visible is all the place to visit in Lucknow. Not just heritage, places for shopping, museums, recreational areas do sum up the amazing attractions. This shall definitely be helpful while planning your Uttar Pradesh trip and eventually a tour to Lucknow. So, are you ready to head to this cultural city and share our experience with us? Do not forget to add some other places that we might have missed in the comments!

Frequently Asked Questions About Places To Visit In Lucknow

What are some amazing things to do in Lucknow?

There are plenty of things to do in Lucknow like dining at the Oudhyana, shopping at Hazratganj, picnic at the parks, and taking a heritage walk organized by the tourism department.

When is the best time to visit Lucknow?

Winters are the best time to explore Lucknow which means the months of October to March are your target time of travel.

What are some street foods of Lucknow?

Being a city of the Nawabs, the Mughal culture has been deeply infused with the cuisine as well. So, you can find an endless amount of Kebabs, Biryanis, Shawarmas and Kulcha Nihari.

Are there any hill stations near Lucknow?

Yes. There are quite a few hill stations near Lucknow- the most prominent of them being Champawat, Bhimtal, Nainital, etc. that are pretty much within 400 km of distance.

Are there any popular markets in Lucknow?

There are a few delightful areas for shopping in Lucknow including Hazratganj, Aminabad, Chowk, Alambagh and Yahiyaganj.

Museums In Bulgaria: 12 Wonders That Fascinate All Avid Travelers