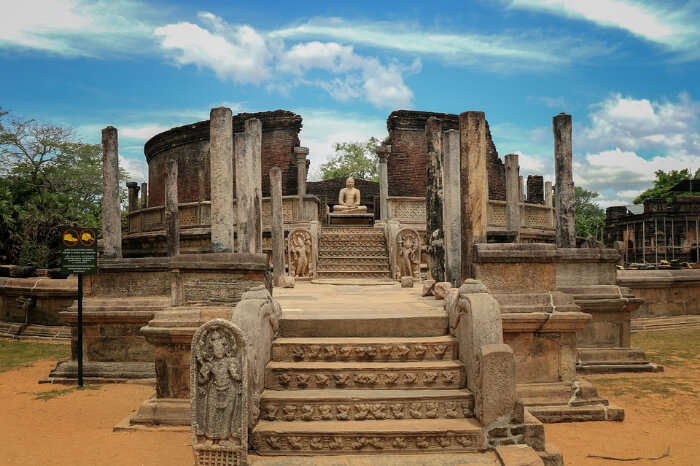 The beautiful island of Sri Lanka is a famous tourist destination for people across the world. A small island with beautiful beaches and the lush scenery is truly a traveler’s paradise. But there are others things also apart from the beaches and scenery that attracts people from around the world. The traditional essence of the true Sri Lankan culture can be found in the small towns and villages of Sri Lanka. One such place is Polonnaruwa. Let us check out the Places to visit in Polonnaruwa that reflects the true Sri Lankan culture and heritage.

Top 11 Places to visit in Polonnaruwa

The following places are some of the best Places to visit in Polonnaruwa as they represent the culture and heritage of the Sri Lankan land.

Image Source
On a visit to the Polonnaruwa Heritage City, the Royal Palace is a never miss attraction on the trip. This Royal Palace of the great King Parakumba (1153-1186 ) had been constructed as a seven-story building. It took the construction around seven years and seven months to be completed. Out of the 7 stories having 1000 rooms, only 3 stories with 55 rooms are remaining. The Palace had been destroyed by an invader from south Indian named “Maga’.

Image Source
The Shiva Devale No. 2 is considered to be the oldest building in the city of Polonnaruwa as it dates way back to the South Indian Chola dynasty period when the Indian invaders had established this city. Unlike many of the buildings of the Ancient City of Polonnaruwa, it had been created entirely of stone. Due to this reason, the structure today is in a much similar condition as it was when it was built centuries ago. The statue of Lord Shiva’s mount, Nandi the bull is something to watch out for.

Must Read: 8 Things To Do In Negombo That A Traveler Must Experience On Their Sri Lankan Vacay

Image Source
This sacred quadrangle has a number of significant sacred monuments. It is a representation of the grandest architecture of the Ancient city of Polonnaruwa during that period. The extremely eye-catching scene of the entire quadrangle is believed to be the circular Vatadage. Four large Buddha statues surround the middle of the shrine.

Image Source
The swimming pool is situated at the corner of the palace grounds. There are some crocodile-mouth spouts which direct the fresh water into the pool. It is one of the main attractions of the ancient city of Polonnaruwa. It is ideal to visit it in the evening owing to the warm weather.

Image Source
The term Kiri Vihara means “milk-white”. This large stupa is lying north of Lankathilaka Pilima Ge. It had been created by a queen of the great king Parakramabahu (1153-1186) named “Subadra”. The original lime plaster is in the perfect white condition even after almost 700 years of it being created. It is said to be the best-preserved unrestored dagaba of the Polonnaruwa city. The first traditional name of the stupa was “Rupavathi Stupa”. It is a part of the Ãlahana Privena and it stands at 80 feet in height today.

Image Source
This is the third largest dagaba of the Ancient Polonnaruwa city and it is in excellent condition. The origin of this uniquely shaped Pabalu Vehera stupa is yet to be discovered. It has been built by a consort of the king great Parakramabahu ( 1153-1186 AD). This stupa is currently called by the name of “Pabalu” which means beads. This is due to the reason that a large number of glass beads had been found at the time of the excavation of the area near to the stupa. The top, as well as the center parts of the stupa, have been destroyed by the invaders and treasure hunters just recently.

8. The Buddha statue at Lankatilaka

The Lankatilaka Vihara is said to be one of the emblematic structures of an ancient kingdom of the city of Polonnaruwa. Two great walls created a narrow aisle that led the way to a very impressive, headless Buddha statue is still standing. The height of the statue is almost over 14m high. It was built by the great King Parakramabahu.

Must Read: 45 Best Places To Visit In Colombo That Will Spice Up Your Sri Lankan Sojourn!

Image Source
This is a UNESCO World Heritage Site. It is the perfect specimen of Lord Buddha statue created with solid stone. It was built during the reign of the great King Parakramabahu (1153-1186 A.C). The reclining Buddha sculpture is 14 m long, which represents Buddha entering the Nirvana stage. The sculptor artist of the Gal Vihara possessed a great deal of skill and expertise in the field of stone sculpture in the land of Sri Lanka.

Image Source
The Rankot Vihara stupa had been created by Nissanka Malla of the ancient city of Polonnaruwa. He had ruled the country for almost a decade from 1187 to 1196. The Rankoth Vehera have been created keeping in mind the old tradition of the Anuradhapura Maha Viharaya. It has an impressive height of 54 meters. The stone inscription near to the stupa describes it to be known as “Ruwanweli”.

Suggested Read: 19 Photos That Will Make You Wish You Were In Sri Lanka Right Now!

Image Source
The tank is believed to be an ancient reservoir of water for the city. The country of Sri Lanka is full of a variety of tanks. The ancient city of Polonnaruwa is situated on the banks of the Topa Tank. The tank is a beautiful location for sightseeing. The tank is raised up from the town so one only see it if one walks towards it.

Further Read: 10 Reasons Why Sri Lanka Should be Your Next Holiday Destination

Places to visit in Polonnaruwa are many and each of them has something unique to know about. The ancient city of Polonnaruwa is definitely a true cultural reflection of the land of Sri Lanka. So, plan a trip to Sri Lanka today, and head to Polonnaruwa to experience the cultural heritage of the city.

Kandy Shopping: 10 Best Places In The City That’ll Compel You To Stop & Shop!