10 Stunning Pyramids In Mexico To Visit In 2022 That Are All About Architectural Brilliance! 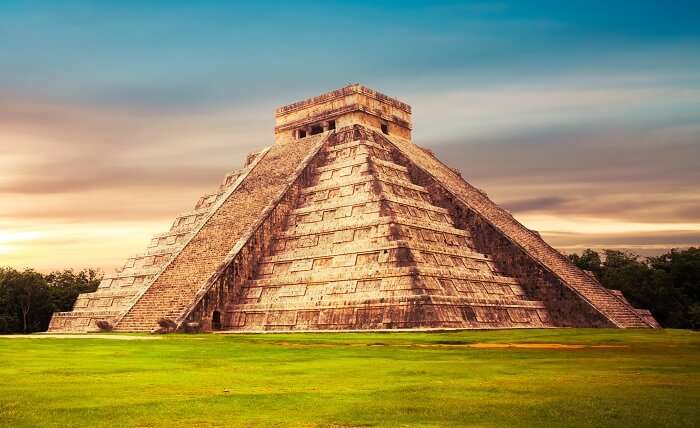 Striking a perfect balance between rich history and modern culture, Mexico is all about vibrant cities, exotic food, and amazing people. Boasting of mighty mountains, vast stretch of deserts, and dense jungles, the fascinating pyramids in Mexico are also one of the major crowd pullers in this North American paradise. Oozing architectural brilliance, these Mexico pyramids represent a different era all together. Most of these famous pyramids in Mexico were built around 900 B.C.E to 1000 C.E, and they are a testament to the cultural importance of this country.

Weaving a different story, each of these Mexico pyramids holds a significant historical and architectural past that would surely be interesting to explore on your next trip to Mexico! Here is a list of pyramids in Mexico that are architectural masterpieces in their own ways.

1. Pyramid Of The Moon: The Second Largest Pyramid

Pyramids in Mexico map is ranked second in the list of largest pyramids of Mexico. Teotihuacan is also known as the city of God as it was highlighted during the era of Christ. However, the pyramid of the moon was built around 200 to 450 AD and it features several different pyramids layered upon one another. Originally built for the great Goddesses, every layer has rooms that are used for burying now.

Location: Western part of the ancient city of Teotihuacan

Must Read: The Azulik Resort In Mexico Offers Treetop Luxury & Breathtaking Views! Would You Check-In?

Nohoch Mul is one of the tallest in Mexico city pyramids that is also counted as one of the important sites of the Mayan Pyramids, Mexico. The ruins of Coba the largest in Mexico whereas more than sixteen white ceremonial roads are stretched from this, one of the famous of all Mexico pyramids and connected to different settlements. The meaning behind Nohoch Mul is large hill which includes around 120 steps which are way more steeper than they seem. Also, the top view is one of the most beautiful sites that you shouldn’t miss at all.

Suggested Read: 10 Romantic Ideas For A Honeymoon In Mexico

This is one of the most beautiful pyramids of Mexico. Calakmul is counted as one of the reigning cities that faced constant war. While the pyramid is set in Yucatan, the city is also known as the kingdom of snakes or in other words, surrounded by deep green forest. Inside the pyramid, there were four tombs that were discovered whereas the great pyramid covered a large region of the area. Not just that, if you are planning on visiting this pyramid then you will also enjoy the jungle which is now used as the Calakmul bio reserve for preserving tropical birds.

4. El Tajín: Pyramid Of The Niches

Found back in 600 to 900 AD during the Classic Veracruz culture, El Tajín was announced as one of the most important golf cities back then. However, one of the most unusual things found was that this one of the popular pyramids of Mexico was painted in a combination of dark red and black which was a very different niche. Also, the pyramid of niches is divided into several layers at the height of about 20 meters.

5. Uxmal: Pyramid Of The Magician

Excited to visit some hidden pyramids of Mexico? Abandoned during the 10th century due to the Toltecs, the place was hidden until the arrival of the Spanish locals. The meaning behind the word ‘Uxmal’ is thrice built which also shows the different styles of architecture in the particular area. Being one of the top pyramids in Mexico, it shows the beauty of knowledge related to astronomy back then. Also, the pyramid is aligned with the planet of Venus and the stairs are aligned with the sun’s rays which makes it one of the unique pyramids that do not just hold the stories from history but shows existential proof of the historical past.

Suggested Read: Few Scientists Got Closer To The Sea Creatures In Gulf Of Mexico & Discovered An Astonishing World!

6. Pyramid Of The Sun: The Sister Pyramid

This one belongs to list of the most famous Mexico pyramids. The pyramid of the sun is called the sister pyramid as it has the same shape as well as the tombs with different layers. However, the pyramid is the largest one that you will find here, and it is believed that this pyramid was used for performing different rituals related to magic in the bygone era. The vibe that you get, as you climb up the main pyramid, is beyond words. You can also view the city from the topmost point of the pyramid.

Suggested Read: 9 Best Places To Visit In Mexico In 2022 For A Soul-Satisfying Holiday !

7. Chichen Itza: The Temple Of Kukulkan

Considered to be one of the seven new wonders in the world, Chichen Itza was built to be dedicated to the God of Mayan. The construction of the pyramid was built in such a way that when the sun sets during the spring, the shadows of the stairs turn out as a serpent. However, the illusion looks like Slytherin and the different steps of the pyramid were built in 365 symbols referring to the days in a year. Among all the pyramids of Mexico, Chichen Itza pyramid has its own unique charm.

Suggested Read: 10 Best Places To Visit In Monterrey To Experience A New-Age Mexico

8. Palenque: Pyramids of the Inscriptions

Pyramids in Palenque are impressive, and not just because of their size but also because of their elegant architecture. These Mexican pyramids are 89-foot in height and on the top of the pyramids rests temples. These temples are covered in Maya hieroglyphs, hence earning the pyramids their name – pyramids of the inscriptions.

Suggested Read: 9 Places To Visit In Mexico With Kids For A Fun-Filled Vacation In The Country’s Best Sights!

Coba is an ancient Mayan city, and it is also home to the Iglesia and the Castillo – two of the most impressive pyramids to have unearthed. The city of Coba was thriving between 800 and 1100 C.E.. The pyramids are half-ruined and covered in plants giving them a mystic and mysterious look. These, one of the many ancient pyramids in Mexico, are a treat to watch and explore.

The Great Pyramid of La Venta is the oldest known pyramid of Mexico. La Venta is situated in the state of Tabasco, and the pyramid found here was built around 900 B.C.E. The structure is 100 ft tall, and was built of clay. Originally it was rectangular in shape, however with age the clay has softened giving it a round shape. This, one of the many Mexican pyramids, is one of the most sophisticated pyramids to ever excavated.

Intrigued much? Get going on your next adventure and witness the charming beauty of these spellbinding pyramids in Mexico on your next Mexican holiday. Plan a trip to America ASAP and see the fascinating side of Mexico.

Which is the best pyramid in Mexico?

Mexico houses many pyramids but for those looking for the best pyramid in Mexico then it is the Aztec Pyramids. Add these to your Mexico itinerary and do not miss the best of Mexico with your travel buddies.

Which pyramid is not to be missed when in Mexico?

For all those wondering which pyramid is not to be missed when in Mexico then it is the El Tajín Pyramid of the Niches. Keep this in your itinerary for Mexico and explore these pyramids with your travel partners.

Which is the best attraction in Mexico City?

Where are the Mayan pyramids?

Mayan pyramids are located in Chichen Itza and Coba in Mexico. Whenever around Mexico explore these pyramids with your travel partners.

Which is the oldest pyramid in the world?

The oldest pyramids in the world are located in Egypt. The Pyramid of Djoser is the oldest confirmed pyramid in Egypt. For those interested in exploring the history of Mexico this pyramid is a must-visit place.