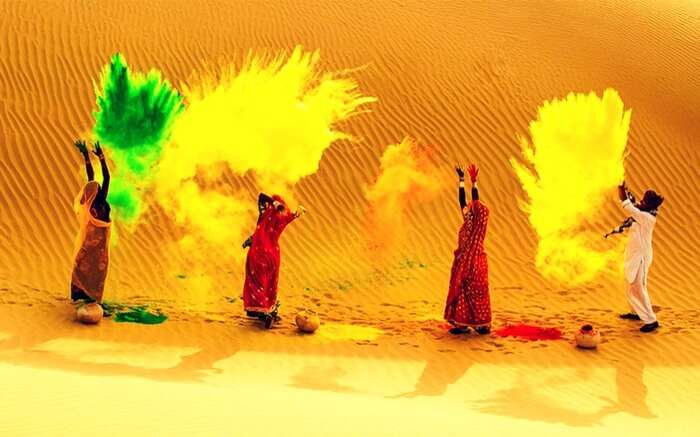 Color is bliss! India in February and March is so vibrant, while the weather shines at its best, festivities and positive vibes begin pouring in. The fudgy winter makes way for the chirpy spring, and Holi vibes begin to permeate in the air around. While celebrations with colors remain constant, places across North India go celebrating rituals and traditions around Holi, thanks to the legends and stories. Rajasthani Holi is different and celebrates quite a few different rituals from what people mostly celebrate in Delhi, UP, and Bihar in North India.

Apart from the sumptuous display of colors, the rituals and customs around Holi make a notable attraction in Rajasthan. Be it treating yourself to the signature Holi drinks like bhang chach, lassi, kairi ka paani, and thandai or feasting on authentic Holi cuisines like paneer launglatta, mirchi papad, ker sengar, gatte ki sabzi and pakodi wali kadi, Rajasthani Holi has a platterful of offerings to match your taste buds. But it’s the stories, customs, and traditions from centuries ago that make Holi in Rajasthan so interesting.

Excited about celebrating Holi in Rajasthan? Here is the list of major events that you must attend that will make your celebrations extra special!

A popular way of celebrating Holi in Mali community, the celebration of Mali Holi is characterized by the tradition of men splitting color on women who then respond to men by hitting them with a bamboo or a stick.

The custom marks brotherhood and bonhomie. It also brings brotherhood and unity among the folks. The fact that the entire city, people, and even the cattle are colored in one tone makes it a wonderful spectacle. Rajasthan is the place to delve deeper into the festivities.

Suggested Read: 10 Awesome Places To Celebrate Holi In India In 2021

Amidst the shower of gulaal, Rajasthan gears up to celebrate Gair Holi, which is celebrated in the adjoining places near Ajmer. Men from nearby villages, as many as 12 villages, come together and celebrate Holi accompanied by drums, musical instruments and excitement everywhere around.

The influence of Bhang and Thandai and other sweet delicacies only propel the celebration of the glorious festival in full throttle. Drummers and troupes gather in Godaji Village near Ajmer. As music and beats of drum mark the celebration, the ecstatic face and glee can be felt in everywhere around.

Suggested Read: Celebrations Of Holi In Mathura And Vrindavan 2021

Believed to be an ancient tradition of Holi celebration, this one dates back to 300 years back. Dolchi Holi follows a custom in which men throw water on other men in a vessel called Dolchi – made from camel skin. Quite interestingly, this tradition started with a dispute between two communities. The reason for the dispute, it is believed, was over food.

Men from different communities started throwing water on each other to find a seek a resolute and this gradually became a practice and later an important tradition. The Holi is specifically played by men while women and children only look over.

Celebrated primarily in Brij region in Bharatpur which was founded in the earlier 18th century by Raja Surajmal, Brij Holi is a big Holi celebration that precedes the festival. The grandeur and opulence of this festival celebrated in March is noteworthy. Lord Krishna is worshipped during the festival and various dance and stage shows are organized.

The Raslila dance by men and women dressed as Krishna and Gopis is the highlight of the festival. There is an atmosphere of glee and spirit of the festival can be felt everywhere around. A holy dip in the Banganga river is the most auspicious thing to do as it is believed to cleanse your soul.

Dhulandi marks the end of Winter and beginning of Spring but the legend has another tale associated with it. And it’s about Krishna turning blue after drinking demon’s milk. It was only after his mother Yashoda suggested him to color Radha into the same color that he found the perfect solace and ever since then Holi is celebrated to commemorate the event. During the festival, temples all around are decorated and the entire Braj can be seen basking in Myriad of colors. Dhulandi Holi, primarily celebrated in Jaipur, exhibits the true essence of Rajasthani Holi.

Special arrangements are made at the luxury hotels like Khasa Kothi Hotel that have a special arrangement for foreign tourists. The traditional food, cultural events, and folk songs make the highlight of such events.

6. The Royal Holi Celebrations – Across Rajasthan

Rajasthani Holi can be seen at its glorious best in the city of Royals, Rajasthan holds the distinction of being reputed place for the Royals from the time unknown. Experience Rajasthani Holi the royal way. From their attire to cultural programmes to the affluent display of the grandeur they inherit, the royal families celebrate Holi in Rajasthan in the most eloquent way. The way they mix up with the locals and enjoy the festivities indeed make for an incredible spectacle. Udaipur, Jodhpur, Jaisalmer, Ranthambore, and Pushkar are some of the places where you can celebrate the best of royal Holi in Rajasthan.

Further Read: Holi In Udaipur: All You Need To Know About This Royal Affair

Whip up traditional specialties and immerse in the colors. Rajasthani Holi casts its magical spell on everyone. Are you all set to get drenched in the festivities. If, yes, then get packed, plan your a trip to Rajasthan and leave right away!

7 Resorts Near Bhangarh For A True Rajasthani Cultural Experience!

A Comprehensive Post-Covid Travel Guide To Rajasthan: For A Risk-Free Vacation In The Royal Empire

Winter Is Coming And These 15 Places To Visit In Jaisalmer In December 2021 Are A Perfect Escape!

7 Lavish Villas In Jodhpur Which Are Known For A Comfortable And Luxurious Stay!