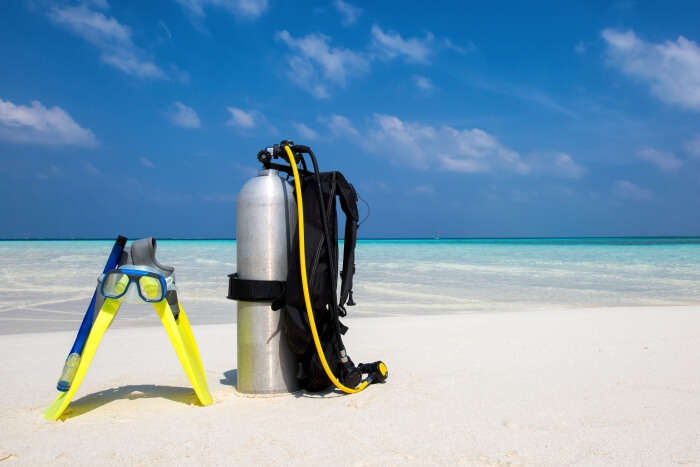 One of the world’s largest country, Russia not only shares its border with loads of European and Asian countries but also with the great Pacific and Arctic Oceans. People with an adventurous streak who like taking risks in life feel attracted to Russia. Once you will try scuba diving in Russia you will realize that there is almost a whole new world that lies underwater having big mysterious caves, wrecks, many whales and seals. These are just a few things that you can easily find inside these waters, rest everyone has their own luck and ways to unravel the secrets and find the treasures hidden in these deep waters.

Once in Russia, prepare yourself to experience the feel of the icy cold waters because you just can’t miss trying this amazing adventurous sport. So that you don’t have to work fining the perfect place for scuba diving we have shortlisted the most famous and preferable destinations for you!

Image Source
If you know even a little about Russia then we are sure you would be knowing about the mesmerizing Black Sea. If you want to experience the amazing feeling of scuba diving but are not quite ready to face the wrath of cold water on your body, then Black is one of the best places for scuba diving in Russia for you. Don’t be surprised, we are telling you the truth, the Black sea is one of the warmest diving locations in the Russian country. The wonderful and the most beneficial part of these warm waters of the Black Sea is that you can even find dolphins under water. Though beyond 150 to 200 meters deep in the waters there is not much aquatic life to see as they are not able to survive because of high levels of hydrogen sulfide but the positive side of the situation is that you can witness the shipwrecks as they remain preserved here for long times. Apart from the scuba diving fun, you can also explore the places around, one amazing place that you can visit is the village if Olenevka in Crimea which houses an underwater museum of Soviet Leader’s busts. Visiting the Black Sea and witnessing its underwater life is once in a lifetime kind of an opportunity.

Must Read: 19 Cool And Unusual Things To Do In Russia That You’ve Never Heard Before!

Image Source
Baikal Lake is one of the most prized possessions of the country as it has a number of tags associated with its name. Lake Baikal is not only the largest freshwater lake in the world but also the world’s deepest lakes with a maximum depth of 1,642 meters. Lake Baikal, the oldest and largest lakes contain 20 percent of the planets total fresh water. Now, knowing about the rich associations of the lake who won’t like to explore the waters of this precious lake? So, that the public doesn’t miss this memorable chance, scuba diving is allowed in the waters of this mighty Lake. Having approximately above 50 diving sites and many options of help and advanced divers available to make the procedure for the beginners a bit easier. From dive safaris to ice diving, the Lake Baikal scuba diving in Russia is famous all over the world. This crescent-shaped lake is adorned with rich flora and fauna along with high visibility which makes this already amazing experience of scuba diving even more exciting. This destination can be visited all year round, though the only thing that you should be concerned about is that the water here is freezing cold, even dropping down to 3 – 4 °C in June and 7 – 10 °C in August. So, as a precaution make sure that you wear a dry suit while going to explore the underwater life of this massive ancient lake.

Image Source
A southern inlet of the Barents Sea, this incredible sea is one of the four seas named after colors, the others being the Red Sea, Black Sea, and the Yellow Sea. Coming under Russian sovereignty and the white sea is considered to be a part of the internal waters of Russia. Rich in aquatic life, the sea houses more than 700 species of invertebrates, approximately 60 species of fishes and around 5 species of marine mammals. The white sea has the maximum depth of 340 meters and is one of the most important traffic centers in Russia as it not only interconnects various economic regions but also provide an outlet for foreign routes. Sometimes the temperature of the place drops down very low but despite the freezing temperature, the sea remains navigable throughout the year because of deployment of icebreakers. Though navigable still the fact remains the same that the White Sea is nothing but another icy cold destination for scuba diving. Though ice diving can be quite challenging but like it is said hard work pays sweet fruits, if your stars are lucky then you might even bump into Beluga Whales also known as sea canaries. With an amazing variety of fauna and great visibility, White Lake is a nice place for trying scuba diving in Russia.

Image Source
The Kamchatka Peninsula is among those few places which have not been destroyed by human greed and activities. Untouched and beautiful, Kamchatka Peninsula with the Pacific Ocean as the eastern coastline and the Sea of Okhotsk as the western coastline is one of the perfect places for diving. Having a large surface area of 270,000 km² and the highest elevation of 4,750 meter the place also has a beautiful aquatic life. Being a house to around 350 species of fish, seals, sea lions, sea otters, walruses, orcas, and whales the Kamchatka Peninsula provides a great scuba diving experience. Diving in the waters, exploring the underwater life by being between the sea life is one thing which surely excites your dead cells. The weather and visibility are the two things that sometimes create a problem for the divers as the climate here is quite unpredictable and can vary between -2 to 14 °C and the visibility here also is not too great in bad weather. Though a bit challenging and adventurous, after all its Pacific Ocean and scuba diving here is obviously not a child’s play. Russia is famous all over the world for its amazing scuba diving experiences and we assure you that choosing Kamchatka will not at all be a disappointing choice.

Location: Peninsula in the far eastern part of Russia

Image Source
Saint Petersburg is not only the second largest city in Russia after Moscow but is also the second most populous city in Russia with an approximate of five million inhabitants. Once a capital city of the country, today Saint Petersburg is one of the most popular tourist destinations in Russia and an important port on the Baltic Sea as well. Famous for its rich historical heritage, canals, and imperial palaces, Saint Petersburg is also considered as the most romantic city in the country of Russia. Though Russia’s most romantic city, Saint Petersburg is also known as Russia’s cultural capital as it houses venues like opera and ballet theatres, museums displaying Russian art, cathedrals, imperial residences and many more. Talking about the sea, it is a mesmerizing site to see and even more exciting to explore. A great idea to cool off in the summers, scuba diving in St. Petersburg Russia is one of its kind of an experience.

With a landscape ranging from tundra and lush green forests to the beautiful sub-tropical beaches, As scuba diving in Russia is a great adventure, you must put it on your to-do list! With such gorgeous places awaiting you in Russia, it is a wonder that you are able to stay calm.

What is Russia known for?

Apart from being known for the best military weapons and cold climate, Russia is also popular as one of the largest countries which is surrounded on two fronts by the Pacific and Arctic Oceans and has amazing white sand beaches and rich marine life.

Is Russia good for diving?

Russian waters have the most diverse diving environs which include mysterious caves, shipwrecks, colorful reefs and aquatic creatures which makes diving in Russia a wonderful experience.

Which is there to do in Russia?

Which is the best time to visit Russia?

Since the winters are extremely cold in Russia, the warmer months of September and October is a great time to visit this beautiful country.

Is scuba diving in Russia safe for first-timers?

Yes. Scuba diving in Russia for first-timers is perfectly safe provided it is done in safe environments and with proper training.

Which are the best diving centers in Russia?

Do you have to be certified to scuba dive in Russia?

Yes. You will require to be certified for scuba diving in Russia.

Is scuba diving safe for non-swimmers?

If done using proper training and under the guidance of trained professionals, scuba diving can be a safe and wonderful experience even for non-swimmers.