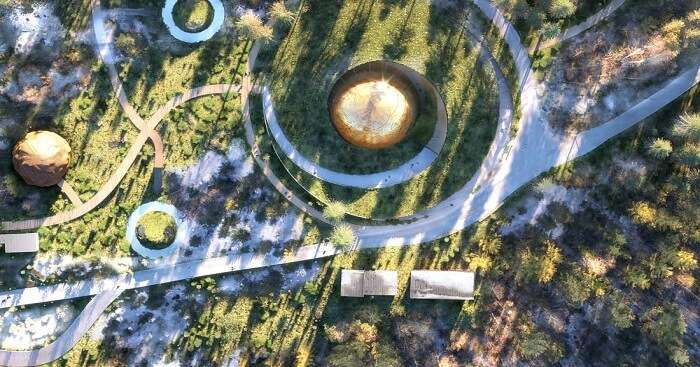 Norwegian land is vast and mostly untouched towards the North Pole. 48 km to the north of Oslo lies Harestua, the place with the captivating countryside. It is from here that tourists find the maze of road running into the woods with dark decorated corridors made up of imposing trees. If you happen to cross this stretch at night, the quietude, darkness, and pristine nature around would leave you charmed.

And the moment you lift your head into the sky, the entire galaxy would seem to be right in front of you – swirling and glittering. The moment you near the end of the star-lit road the presence of a golden dome resting atop a snow-capped hill would fascinate you. It is from here that you get to savor the stunning horizon views that dissipate in directions.

The upcoming facility will be located at Solobservatoriet Observatory – one of the leading astronomical research stations in Northern Europe. The original solar observatory was built way back in 1954 and is a major tourist attraction in the area. The architects who have designed the research station have adhered to the principles of astronomy and even made sure that the cabins located close to the planetarium give the look and feel of the solar system. The well-designed facility can accommodate up to 120 guests. Once you are here right in the vast Norwegian nature you get to experience the true charm of the realm of astronomy.

As the pictures of the largest astronomical base in Norway have surfaced, we just can’t get enough of it. The 16,000 square feet facility is believed to encompass a planetarium and 7 interstellar cabins that resemble planets of the solar system.

As per the architects, when the entire facility will be created, the largest cabin will have a diameter of 10 meters and would accommodate up to 32 people. The smallest cabin will spread across two meters and will accommodate two people. Solobservatoriet has been touted as an international knowledge hub where people assemble visit to seek experience related to celestial bodies.

Image Source
The architects of the Solobservatoriet also maintained that once completed in 2020 this planetarium will be publicly accessible and also act as an international knowledge hub providing expanded support spaces for multiple activities.

There’ll be a wide range of astronomical studies available for the visitors as well, which will include astronomy, sun studies, and natural science. Exploration of the night sky and the Northern Lights are other topics that can be taken up.

“This magical landscape has inspired so many folktales in Norway that we grew up with,” says Vegard Lundby Rekaa – lead astronomer, Tycho Brahe Institute who also manages the observatory.

“You have the valleys, the hills, the forests, the stars. It’s all part of the experience.”

“Norway isn’t a very big country, in a research sense,” adds Rekaa. “We’re few people, but nevertheless, they were creative and clever, and they built an observatory for solar physics, which turned out to [be one of] the world’s most foremost observatories in the ’60s.”

“This is going to be an educational experience, and the architecture is part of the education, a part of the story,” says Rikard Jaucis, a Snøhetta architect.

The new planetarium would allow people to get uninterrupted views of nature while learning a lot about astronomy, all amidst the vast Norwegian outdoors.