17 Incredible Temples In Madhya Pradesh That Reflect Beauty And Charm In 2021! 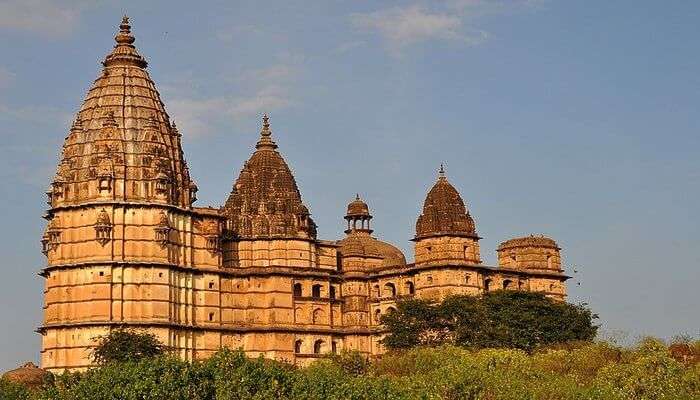 As truly said, Madhya Pradesh has been an adobe for deity for centuries. The cultural heritage and lavish architectural designs have always attracted several tourists every year.

One of the 12 Jyotirlingas, the Omkareshwar temple, is located at the banks of river Narmada which takes the shape of “Om.” Its serenity is what gives peace to the devotees who take parikrama of the temple and chant mantras. The temple has a Lord Shiva shrine and is well known for its evening Aarti of 8:00 P.M.

Must Read: 6 Exotic Hill Stations In Madhya Pradesh Which Will Definitely Make Your Escape The Gloomy Weekend!

Another one of the Jyotirlinga, Mamleshwar temple sits opposite to the Omkareshwar temple at the banks of river Narmada. It is considered to be among the oldest and best temples in Madhya Pradesh and known by another name as Amareshwar temple. The temple’s architecture is among the high attraction points imbibed with its rich history. The temple is said to be constructed in the 10th century.

Suggested Read: Tikamgarh, Madhya Pradesh Is A Hidden Gem That You Must Dig Up

The most famous historical temple in Madhya Pradesh, the jyotirlinga, attracts a vast number of devotees every day, is known as Mahakaleshwar Jyotirlinga. The name is said to have taken from the Mahakali avatar made by Lord Shiva years back to destroy the demon, Dushane. He resided in the holy city of Ujjain after vanquishing the devil. The temple is situated at the banks of Rudrasagar lake, where the Shiva linga is faced southwards.

Suggested Read: 5 Places To Visit In Tikamgarh For An Enlightening Trip To Madhya Pradesh

Timings: 5 AM to 7 PM
Specialty: Liquor is offered to the deity with priest opening the bottle and liquor level reducing in front of pilgrims.
Address: Jail Road, Bhairav Garh, Ujjain – Madhya Pradesh

A lord Ganesha temple having Riddhi Siddhi on both sides, Bada Ganesh Mandir is a historical temple in Madhya Pradesh located near the Mahakleshwar mandir. Apart from Lord Ganesha, there is a bronze idol of hanuman and mother Yashodhara holding baby Krishna in her arms. Devotees from different parts of the world come to worship the Lord.

Suggested Read: Monsoon In Madhya Pradesh: 5 Best Places To Visit In The ‘Heart Of India’ In 2021

Jain temple claiming to have among the most beautiful architectural structures, Adinath temple is located on the east side of Khajuraho. The Khajuraho temple in Madhya Pradesh was built in the 11th century and is dedicated to the first Jain Tirthankar, Adinath, who is also the founder of Jainism.

A noteworthy shrine, Javari Temple, was constructed in the late 10th century is located on the eastern side of the Khajuraho temple complex. The Khajuraho temple in Madhya Pradesh has carvings on the outer walls, and the interior of the temple consists of Nirandhara temple having mandapa and sanctum. With beautiful sculptures adorning the walls, Javari temple is known for its immense beauty.

Timings: 5 AM to 12 PM, 4 PM to 9 PM
Specialty: The name of the temple is derived from the owner of the land and not named after any deity.
Address: Javari temple, eastern group of temples, Khajuraho- Madhya Pradesh

This temple is dedicated to Lord Vishnu who is also called the Sahastravbahu. Located in Gwalior, this temple was made by King Mahipala and with time the name of the temple changed which is believed to be because of the mispronunciation. Featuring beautiful carvings on the wall and magnificent artistic skills, this temple is a treasured sightseeing.

As the name suggests, this temple has Lord Ganesha as the main deity and is considered to be quite a famous place in Ujjain, Madhya Pradesh. This is counted as one of the important temples in the state which is visited by people from far and wide. Apart from being a religious attraction, this temple is also known for teaching the science of astrology and Sanskrit language.

Holding quite a fame among the group of temples in Khajuraho, this temple was built around the year 1050 BC. Decorated with ornate carvings and the 900 sandstone sculptures, the main deity of this temple is Lord Shiva. The Shiva Linga is situated at the Garba Griha and the architecture of the temple showcases the medieval architecture which can be witnessed.

One of the most important temples in Madhya Pradesh, Chintaman Ganesh Temple was built during the rule of Paramaras. The main deity of this temple is Lord Ganesha who is housed at the ‘Garbhagriha’. This temple is known for holding the charm of the ancient period, it is believed that Lord Ganesha himself came to earth and created this temple.

This is the only temple which exists of Chandela reign and known as one of the magnificent temples in the Western group of Khajuraho temples. The main deity of this temple is Lord Shiva and boasts one of the largest lingams in North India. Built around 1100 years ago, the Matangeshwar temple is considered to be one of the important pilgrimage sites in Khajuraho. The Shivratri festival celebrated here is one of the most vibrant celebrations to be witnessed.

This temple is dedicated to Annapurna, the goddess of food. The Annapurna temple is considered to be one of the famous pilgrimage sites in Indore. Boasting the elaborated carvings and also a splendid architecture, this temple is a place worth a visit. This temple also has shrines which are dedicated to Shiva, Hanuman and Kalabhairava.

Reflecting the magnificent architecture, this temple is dedicated to Lord Vishnu. This was built by the Chandela kings and this temple is considered to be one of the largest among the western wing of Khajuraho complex. The temple boasts the exhibition of magnificent images of more than 600 gods at the exterior wall. With its beautiful architecture and a breathtaking mandapa and antral, this temple is worth a visit in Madhya Pradesh.

The Javari temple is one of the famous shrines in the Eastern Group of Khajuraho which is known for its magnificent architecture. According to the legends, it is believed that the temple is named after the person named Javari who owned this land on which the temple is built. The temple boasts immaculate designs and surreal carvings which reflects the beauty of the bygone era.

While visiting Temples in Madhya Pradesh, the holy shrines will let you enthrall the inner peace. You will put your foot to an entirely new universe on your trip to Madhya Pradesh. The scenic beauty, holy shrines, intricate carvings, and serenity are what will attract you multiple times to the state.

Q. What is the best time to visit Madhya Pradesh?

A. Winters are pleasant over there, so you can accordingly pack bags from October to February. Monsoon won’t be the wrong time as well for hill stations and waterfalls visit.

Q. How many Jyotirlingas are there in Madhya Pradesh?

Q. Why is Madhya Pradesh called Heart of India?

A. Centrally located, Madhya Pradesh not only geographically is termed as Heart of India, but due to its rich cultural heritage, the heart of India lies in MP.

15 Best Things To Do In Gwalior: The Glittering Gem Of Madhya Pradesh

10 Waterfalls Near Indore That Are All About Taking A Refreshing Break In 2021!