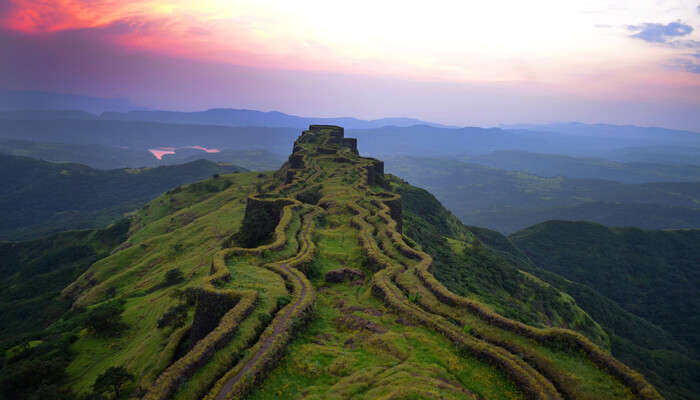 Located in the Western Indian state of Maharashtra, Pune is one of the most vibrant cities in the country. Being home to Aga Khan Palace and Mahatma Gandhi Memorial, Pune is one of those cities that uphold the confluence of spiritualism and capitalism. Adorned with architectural temples and Historic monuments, Pune attracts thousands of visitors from different parts of the country who come to pay their respects to their deities at different temples in Pune. Pune is also home to notoriously famous to Osho International Meditation Resort which was founded by Bhagwan Shree Rajneesh. After brought into the limelight by Shivaji, ruling Peshwas made this city their capital.

The temples in Pune are adorned with intriguing legends and intricate details. Have a look at some of the most renowned temples here.

Located in Shaniwar Peth, Omkareshwar Temple is one of the best temples in Pune. Being one of the oldest ones in Pune, this temple was constructed by Shivaram Bhat who is known for being the spiritual guru of Peshwas. Being an example of splendid architecture from the 17th century, this temple is adorned with Nagara style spires along with Hindu deities such as Ganesha, Vyasa, Makardhwaj, etc. What truly adds to the beauty of Omkareshwar Temple are eloquent columns. You will also find some smaller temples dedicated to Goddess Durga, Lord Shani, Lord Vishnu, and Lord Hanuman inside the temple.

Must Read: 20 Fun Places In Pune And Around That Will Take Your Spirits Up High

Being one of the famous temples in Pune Maharashtra, Chatushrungi Mata Temple is dedicated to Chatushrungi Mata. Built by a merchant known by the name of Durkabhdas, this temple is located approximately 259 km away from Pune. Built during the rulership of Chhatrapati Shivaji, this temple located at a height of 90 ft requires you to cross 100 steps. You will also find a number of temples that are dedicated to Lord Ganesha. If you are in search of a pristine place to get spiritual, this is the perfect place to be at.

Suggested Read: 19 Romantic Places In Pune And Around To Visit With Your Partner In 2021

Topping the list of temples in Pune Maharashtra, Shri Chintamani Ganpati Temple is dedicated to Lord Ganesha. Located approximately 27 km away from Pune, this temple lets you experience the serene environment at the confluence of two rivers i.e. Mula and Mutha. Often visited by devotees during the Ashtavinayak Darshan tour, this temple is said to have self-emanated idol. Considered to have a significant mythological significance, Shri Chintamani Ganpati Temple attracts thousands of Ganesha devotees every year.

Being one of the famous temples in Pune, Neelkantheshwar Temple is known for being dedicated to Lord Shiva with blue neck. Located at a hilltop, this temple requires you to trek for hours to reach the temple. Amazing devotees with a different kind of serenity, this temple is the perfect place to see the sunset of the valley.

Being one of the top temples in Pune, Khandoba Temple is dedicated to deity Khandoba who is believed to be a form of Lord Shiva. Khandoba is one of the prominent lords worshipped in North Karnataka, Andhra Pradesh, and Maharashtra. This temple is considered to be one of the best temples in Pune.

Suggested Read: 10 Thrilling Things To Do In Pune In 2021 That Will Redefine This Not-So-Famous Place!

Dedicated to Lord Narasimha, Laxmi Narasimha Temple is one of the must-visit temples in Pune. Being one of the most beautiful temples in Pune, this temple adorns itself with black stones and splendid architecture. While it took 20 years to complete, this temple transports you to surreal land which will help you enjoy the aura. Located at the confluence of Bhima and Nira river, this temple has been subject of foreign invasion again and again. The original lord here was replaced out of the fear of Mughal Emperor Aurangzeb.

Suggested Read: Shopping In Pune: 12 Places For All 2021 Travelers!

Located in Shivajinagar, Pataleshwar Cave Temple is known for being a rock-cut temple that was built during the rulership of Rashtrakuta. Built during the 8th century, this temple is dedicated to Lord Shiva. You will also find other temples dedicated to Lord Ganesha, Lord Laxman, and Goddess Sita here. Influenced by Elephanta Caves, this temple today stands as a monument protected by the government. It is undoubtedly one of the most famous temples in Pune.

Further Read: 12 Thrilling Adventure Sports In Pune And Around In 2021

Pune is a city that attracts thousands of tourists every year to experience the diverse lifestyle and go on many adventures. Seldom do they realize that it holds a religious value too in terms of tourism. These were the best temples in Pune that you can visit while planning a trip to Maharashtra.

Q. What are the Hindu temples located in Pune?

Q. What is Pataleshwar Cave Temple famous for?

A. Pataleshwar Temple is known for being a rock-cut temple that is dedicated to Lord Shiva.