Visit These Temples In Puri For A Historical Tour Of This Pilgrimage Site In 2021! 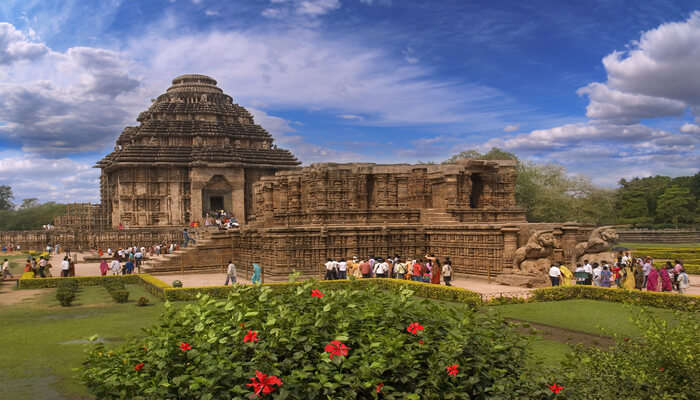 Puri is vital to Hindus as a pilgrimage site. The place has a history of plundering and invasions because of the precious jewels and artifacts that the temples possess. The land of Puri is ancient and has been established in the 12th Century AD that boasts several heritage sites. Have a look at these temples in Puri and go on a heritage tour. Jagannath temple is a synonym to Puri being such a famous and historic temple. The temple is one of the wealthiest temples because of the amount of treasury it has. It is because of the importance of this temple in the Hindu culture, the maximum of the wealth comes from the devotees who donate to the temple.

The city of Puri is a coastal district that falls in the state of Odisha. Along the banks of river Mahanadi, the town settled along the Bay of Bengal. Let’s have a look at some of the best temples in Puri.

One of the most significant holy places in Hinduism, the Jagannath temple, is a prime site for Vaishnavas. The temple has been into existence since the time of Mahabharata under the reign of King Indradyumna. In the 12th Century, it was further developed by King Anantavarman, who belonged to the Ganga Dynasty.

The deities worshipped inside the temple are a trinity in which Jagannath, Balarama, and Subhadra are the names with which they are recognized. The temple hosts a chariot festival annually, which is world-renowned, and it is known as Rath Yatra Festival. The three deities are then mounted on the intricately decorated Raths and toured across for darshan.

Must Read: 10 Holiday Homes In Puri That Ensure A Comfortable & Relaxing Stay!

Lokanath temple is one of the five famous temples that are made to worship Lord Shiva. The legend says that it was Lord Rama who established this ancient temple. The style of architecture used in this temple is Deula.

If we talk about the temple, the central section is out of marble. The rest of the temple is constructed with hands-on. The prime dirty of this temple is the Shiva Lingam, which is the sanctum sanctorum. The natural fountain that flows above the Lingam is hidden otherwise, but during Shivratri Festival, it is open for Darshana.

Vimala temple is situated inside the Jagannath Temple complex itself. Besides, this is one of the Panch Tirtha, i.e., Rohini Kunda. This temple is one of the Shakti Peetha amongst the other, which are there in India.

The temple is again a Deula Architectural style, but it is made of Sandstone. The deity in this temple is regarded as consort and guardian to the Jagannath temple complex. Before praying to Lord Jagannath, it is essential that devotees first visit Bimala Temple.

The importance of this temple is to the extent that even the prasad one receives from Jagannath mandir is sanctified until you have offered it first to Vimala. During Durga Pujo, you can see the grand celebrations that are organized here.

This 9th-century-old temple is known for the deity it worships. The idol is considered as a masterpiece, hence the fame. Also, the next thing it is known for is the architecture design. The main sanctum consists of Goddess Varahi’s idol, along with those two smaller ones on the sides.

The Goddess’s idol is carved where she is in Lalitaasana’s posture with a fish in one and skull (kapala) on the other hand. The distinct thing about the idol is the large belly, which is the symbol of the goddess carrying the universe in her womb.

As the name suggests, the temple is dedicated to Lord Hanuman. The beauty of this temple is that it is next to the sea, that is why it is also called as Darya Mahavir. The idol of Lord Hanuman here has a laddoo in one and mace on the other hand. Other than the presiding deity, Lord Hanuman, others are carved on the walls like Anjana and Lord Ganesha.

Legend says that the name Bedi Hanuman was given because Lord Jagannath ordered to Chain Lord Hanuman here because he was not able to fulfill his duty to prevent the seawater which enters Puri. The occasions celebrated there are Pana Sankranti, Rama Navami, and Hanuman Jayanti. They are popular as well in the region.

This temple is amongst those five famous Pancha Pandava temples of Shiv we mentioned before. The Hindu belief says that one can atone for his sin of killing a brahmin here. The Goddess Shymakali ten-armed idol is inside the sanctum. The walls, on the other hand, have carvings of the gods Narasimha, Shiva, and Vishnu.

There is also a peculiar idol of Lord Ganesha without his mount mouse, which is a rare sight, but here it indicates the antiquity of Lord Ganesha. A sacred pool is there inside the temple complex, which goes by the name Manikarnika. Chandana Yatra, which happens in the Jagannath Festival, is associated with Kapala Mochana.

Suggested Read: 10 Fascinating Odisha Museums For Your Love Of History And Art

This temple is significant to the auspicious Jagannath festival because it is the destination for the Rath Yatra, which begins from Jagannath temple. The festivity goes on for nine days in which the Trinity of Jagannath temple is occupied here because of the darshan for which the devotees come in huge numbers.

The critical fact is that the temple remains empty throughout the year and is used only during these nine days of festivity. Again made in Deula style of architecture, the temple is made of light grey sandstone.

Situated at the entrance of Puri Town in Kumbharpada, the Astachandi Temple has its own importance among the locals. The temple falls between the path from Bhubaneshwar to Puri, and is located at the right side of Atharnala Bridge Puri. This temple is dedicated to the prayers of the eight Chandis which are collectively known as Astachandi. The eight Chandis are Bata Mangala, Sarvamangal, Bimala, Alamba, Dakshinakalika, Marichika and Harachandi.

Suggested Read: 8 Relaxing Picnic Spots Near Bhubaneswar To Explore In 2021

This is a unique temple which is built in the form of water tanks which justifies the point for five sacred water sources. The secret tanks are named as Indradyumna (Near the Gundicha temple), Manikarnika (In the Manikarnika street) Swetaganga (Towards the south of Jagannath Temple), Markanda (Towards the north of the Jagannath temple). These are considered to be main tirth locations and where the sea water blends with the sacred waters to make the Panchatirtha.

Suggested Read: Visit These 11 Mysterious Temples Of India In 2021 & Get Amazed By Their Weird Rituals!

The Chakranarayan temple holds much importance and is dedicated to the Lakshmi-Narasimha which is worshipped by people from around the world. Located at the Northern side of Subaru-Gouranga temple, this temple is famous for its beautiful idol which is worth witnessing.

Suggested Read: 8 Places Near Cuttack That You Must Surely Visit On A Long Vacation In 2021!

This is an age-old temple which is situated at the south-eastern side of the Lord Jagannath temple. Considered to be one of the magnificent and famous temples in Puri, this holy place fronts to the east and holds the Vimana and Jagamohan. Inside the temple, an idol of the goddess is worshipped which is described as a deity with four-arms seated on a carcase drinking blood.

Suggested Read: 23 Tourist Places In Odisha To Visit In 2021 For A Fun Vacation!

The temple tour is incomplete without visiting this ancient temple in Puri which holds much importance. This is one of the famous shrines in Odisha located inside the old palace of the Gajapati Kings of Puri. It is a royal palace which is situated at the Grand Truck Road of Puri and can be reached by taking the door of the Lord Jagannath temple.

Further Read: 10 Best Hotels In Puri For A Comfortable Stay In This Beautiful Place

The land of Puri is very sacred and of great significance for Hindus. Apart from the above, there are many small and big temples in Puri where devotees visit and pay homage to the deities. It won’t be an exaggeration to call it a pilgrim’s paradise because of the number of temples important to Hinduism is located in this very city that is worth visiting on your trip to Odisha.

Q. Which months are the best to visit Puri?

A. The best months to consider to visit Puri are October and February because the weather is pleasant and the city beams with a captivating aura.

Q. What are the other things apart from temples which are famous tourist attractions?

A. Here is the list of places you can Visit in Puri apart from the historical temple:
1. Puri Beach
2. Chilka Lake
3. Sudarshan Craft Museum
4. Narendra Tank
5. Swargadwar Beach

Q. Why Lord Jagannath has no hands?

A. The Lord Jagannath is the embodiment of Param Brahma (Lord of the Universe). It is symbolic that somebody who is omnipresent can do anything without moving, seeing, or listening.