Varna In March: Here Is Everything About This Bulgarian City 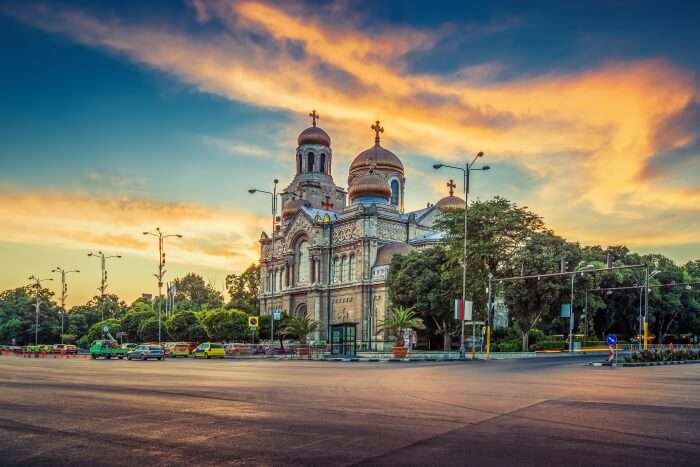 The Sea Capital of Bulgaria is a hidden gem, which is yet to be discovered in its entirety. Travellers usually visit the capital of Sofia and assume that, that is all there is to this amazing and diverse country, but a visit to Varna will definitely change their mind. While Varna offers the best of the coastal life, it also is a great lesson in history and is rooted in it through its museums and the ruins. Varna in March is more or less, the apt time to visit this charming port city.

Image Source
Just along the coastline of the Black Sea, Varna has a great weather almost all year round. Summer in Varna begins in early May and stays that way right till October, when it starts getting cooler. July and August are considered to be the hottest months, with temperatures even rising up to 35°C, at times. This is also the time that the city is the most crowded, since the maximum of the beaches are located in this part of the country. Varna in March is the best, since it is just warm enough to venture out and explore the city in all its glory. Sure, there might be spells of rain or even snow at times, but not that it will become an obstacle for you.

Best Things To Do In Varna In March

One of the reasons Varna in March is the best season is because the city is not crowded and you can tour the city at tour leisure, in complete peace and calm.

While you are in Varna, one thing that will stand out is the rich history and heritage of this place. After all, this is where the Necropolis was discovered and that led to so many more valuable pieces of history also to be found. So, if you are in Varna in March and it is one of those days when it is raining, head indoors to one of the very many museums. One of the popular ones, is of course the Archaeological Museum, which houses the items from the Necropolis, apart from artefacts from the other eras too. This museum is a treasure trove for archaeologists world over.

Must Read: 10 Comfy Hostels In Varna To Help You Explore This Place The Right Way

2. Stroll down the Sea Garden

Image Source
The Sea Garden, is almost like an emblem of the port city. A sun dial in the shape of a swan welcomes you to this grand park, which reminds of the Central Park of New York; but, the difference is, this is not just a park, but more like a complex, which houses a dolphinarium and a mini amusement park among others.

If you are in for a bit of romance, you should probably head to the University Botanical Garden. If you are in a mood for some horse-riding lessons, you could indulge in that too.

If you are a history buff and love to see some rare collections, then Battle of Varna Park Museum is the place for you. This is the place where the Polish-Hungarian King Vladislav III Yagello was defeated by the Turkish Sultan Murad II. The museum is located in the park, where you can just sit and recreate how the battle went down.

Image Source
Varna is also a city of cathedrals. Not just any, but one of the very best. Dormition of the Mother of God Cathedral is not only Varna’s largest and Bulgaria’s second largest orthodox cathedral. You can spot this cathedral from anywhere in the city. During the socialist days of Bulgaria, people did not believe in religion and were widely atheists. Churches were present, but no one was allowed to visit those and were considered symbols of historic importance. It was only centuries later that the people started going to church. This cathedral has stood the test of time and stands tall in this port city. The exteriors are as grand as the interiors.

Another place you need to visit is definitely The Monastery of Saints Constantine and Helena. No one knows when this monastery was built, but this monastery is now a place of tranquillity and is now a resort too many a travellers who want to spend their vacation in calm and quiet.

There are many other cathedrals all across this port city, which you can discover yourself, while you are there.

4. Soak in the art and culture

Image Source
Not only does Varna have a stunning coastline and lush green flora, it also houses some place of interest, which act as a melting pot of culture for Varna and the surrounding towns and villages. To start with, you could head out to the Puppet Theatre, and don’t think it is just for the kids; adults will enjoy as much as children do at this place. The hall can hold up to 130 people at a time and has dressing rooms and rehearsing halls, et all. This is truly a place where you will turn children, with your own children. Classical puppets, shadow theatre, and masks – they indulge in all the nitty gritty of puppeteering. To add to this, they also have a Museum of Puppets, where there are exhibits of around 140 theatre puppets, along with all its elements and decors. The entrance of this museum is adorned by the puppets made by the founder of this theatre, Georgi Saravanov.

There is also the beautiful open-air theatre of Varna where cultural events take place all year round. The very famous Varna International Ballet Competition is also held here in summer, but there are always events happening all year round.

5. Walk down the alleys and streets

Image Source
March month in Varna is unpredictable, with spells of rain or snow, from time to time. But, when the weather is pleasant, the best way to explore the city would be by foot. Heading into the unknown is always exciting. On your walk, you might spot the singing fountain, one of the latest attractions to Varna’s tourist list. It is best seen in the night with all the lights on, but it still does work even during the day time. While you are on a stroll, you can also spot the clock tower. You could also head out towards the port and the lighthouse to catch the best view of the city.

Varna parties and how! The area around the beach is dotted with nightclubs, discos and live bands bars. Music from all over the world is played in these clubs by world renowned DJs, who come down to perform at these nightclubs. Some cosy and some just plain loud, this is an experience you would not forget.

Suggested Read: 15 Spectacular Places To Visit In Bulgaria That Are A Treat To Your Eyes

Image Source
Every year, March 3rd is celebrated as the Liberation Day. There are celebrations across the country and Varna is no different. This day commemorates the end of the Russo-Turkish war and is the day when Bulgaria was declared independent in 1878. In Varna, it starts with a mass at the Dormition of the Mother of God Cathedral, followed by the flag raising ceremony in front of the church. This is then followed by a procession around the town. The day ends with a traditional concert at the Festival and Congress Centre. If you are there in March, do not miss out.

Varna in March is neither too hot, nor too cold – it is just right. There are so many things you can indulge in and it cannot be done in a day or two. Though it is a port city, lined with beaches, March might not be the best weather for that; you could visit one of those beaches. But, this is the season to take in the beauty and culture of this city. So, when are you packing your bags for Bulgaria? Do make sure to book your tickets to Europe in advance!

Try Canyoning In Slovenia On Your Next Trip To Europe!

10 Best Croatian Islands That Are Perfect For Your 2020 Beach Holiday!

14 Spectacular Switzerland Tourist Attractions That Are Worth A Visit In 2020!