Vatican Museums: An Abode To Witness The Artistic Heritage Of Rome 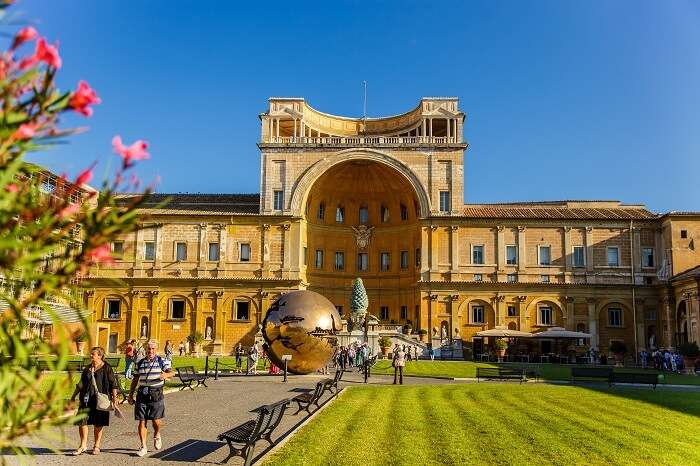 Rome, the capital city of Italy is adorned by the ruins of the rich heritage, and glory of the past. This city is a historical powerhouse which is graced by the tarnished ruins, inspiring art, and the vibrant streets. Amidst this Roman Empire lies the Vatican city, which is the world’s smallest country encircled by the borders of Rome and is known for its art, heritage, and culture. Also, apart from being a architectural masterpiece, travelers flock down to this country for spiritual peace too as it is a center for Roman Catholics worldwide.Get ready for an exquisite Vatican museums tour and keep scrolling!

About The Vatican Museums

Commonly the Vatican City is referred as the, ‘Holy See’, this city-state is home to some of the important heritages of Rome like the St. Peter’s Basilica and the famous Vatican Museums, an abode of the Sistine Chapel.

The past of Vatican Museums dates back to the 1503’s, the year when Pope Julius ll took the step to give away his private collection of art in the form of a donation. Since then the private families and the other popes increased the collection, and today it has the largest collection of impressive art works in the world.The Vatican museums celebrated its 500th anniversary on October 2006 with the opening the excavations of a Vatican Hill necropolis for the public.

Attractions Inside The Vatican Museums

Just stepping inside the museum, the impressive spiral staircase begins the long journey of exploring the artistic paradise. Designed by Giuseppe Momo in 1832, today this is most photographed stairs in the world. The staircase has a sheer size and commonly known as the Snail’s staircase. Built out of two iron rods engraved stairways which forms a double helix like structure.

Suggested Read: Rome Is Finally Getting Its Own Beach And We’re Packing Already!

An adjoining space to the Papal museum, the four Raphael rooms serve as a grand entrance to the Vatican and depict the beautiful Vatican museums artwork. This place is known for the frescoes by Michelangelo and Raphael. Stands overlooking the Belvedere courtyard, these extraordinary rooms showcases the four brilliant stanza; Sala di Costantino, Stanza di Eliodoro, Stanza della Segnatura and Stanza dell’Incendio del Borgo.

The Gregorian Egyptian Museum is the abode of ancient artefacts originated from the ancient Egypt. Founded in 1839 by Pope Gregory XVI, this historic museum has nine rooms, equipped with sculptures, statues and clay figurines which are taken from Rome and Villa Adriana in Tivoli. These historical treasures will take you on a journey to explore the ancient Egypt.

4. Vatican Historical Museum and the Portraits Of The Popes

Suggested Read: Rome Nightlife: 10 Best Places To Let Your Hair Down In This Ancient City

Built in 1973, this is one of the modern museums among the Vatican museum which portrays the collection of popes from the sixteenth century till today. This place also features the “papamobilli” or pope mobiles which portrays the evolution from the first carts and carriages to the little motorised white ones.

Considered a stand alone feature of Vatican city, the Sistine Chapel is one of the most visited churches consecrated in the late 1400’s. A true abode of witnessing art, the ceiling of the church is adorned by Leonardo Da Vinci’s masterpiece, Last Judgement. Another sight to enjoy is the Botticelli’s long murals which often get overlooked.

Admire the beauty of the red marble papal stone which now stands at the Vatican city, which basically originated from the Basilica di San Giovanni in Laterano. (the official ecclesiastical seat of the Bishop in Rome) The shining red marble represents the royalty which gets complemented by the mosaics and frescoes which are lined up in the gallery.

Just as the name says, this space holds a series of painted Topographical maps which were commissioned in 1580. Located at the west side of the Belvedere courtyard, Ignazio Danzi took three years to complete these 40 panels. The gallery is spread across an area of 120m and represents a heritage sight for art lovers.

Suggested Read: 25 Best Hotels In Rome That Are All About Luxury, Comfort, And Convenience!

For the people who admire Pantheon, Sala Rotonda will definitely be a fascinating sight to explore. A smaller version of the central Roman building, the curved walls of the museum are adorned with aligned statues and the floor laid with stunning mosaics. The main highlights of the place are the gilded statue of Hercules and a large marble basin placed in the middle of the room to catch the rain.

9. Gallery Of The Statues

Its name is enough to understand what it has in its treasure. Located within the Pio Clementino Museum, this gallery stretches down a long corridor lined up with statues which has significance in Roman history. Earlier the walls were decorated with frescoes of landscapes and cities, but now it showcases marble arts which are equally impressive.

Suggested Read: 8 Beautiful Villas In Rome To Indulge In A Royal Experience On Your Next Vacay!

The Pinacoteca Vaticana was situated at the Borgia Apartment until 1932 after which it was shifted to its current location. This place has treasured stunning paintings such as ‘Raphael Oddi Altarpiece to Leonardo Da Vinci’s, St. Jerome’s In The Wilderness. This is the last abode to the Vatican museum and might be a paradise for the art lovers.

Other Highlights Of The Vatican Museum

Suggested Read: 8 Romantic Places In Rome To Make You Fall In Love Once Again

While one can also book Vatican museum tickets online from the Vatican Museums’ official website, take a look at the price break-up per person:

The Vatican Museums are open for the public from Monday to Saturday from 9 AM to 6 PM (final entry at 4 PM). And for a free of cost admission, the visitors can visit the museums on the last Sunday of the month between 9 AM to 2 PM (final entry at 12:30 PM). But this day is exceptionally crowded, thus if you want to avoid the excessive crowd then avoid visiting these museums on holidays and free Sundays.

How To Reach Vatican Museum

By Metro: Take a metro from Line A direction Battistini, Ottaviano, or Cipro stations

By Taxi: Taxi rank in the square located right in front of the Vatican Museums

Intrigued yet? If you have an eye for exploring the ancient treasures of Rome and witness an artistic side of the city, then Vatican Museum should be on top of your bucket list. And to explore this gem at its best, book a customizable Rome holiday package with TravelTriangle.

Q. How much does it cost to get into the Vatican?

Q. How many museums are in the Vatican?

A. There are 54 museums in the Vatican.

10 Intriguing Museums In Telangana That Offers An Insight Into The Culture Of South!