Best Villas In Russia For A Rejuvenating Holiday In The Land That Has It All! 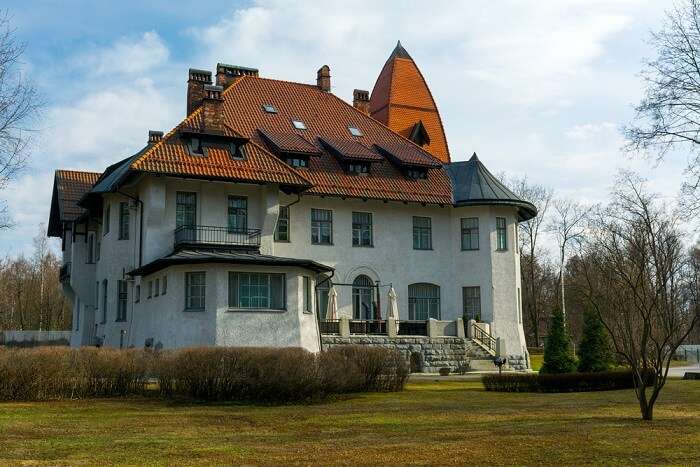 Russia is definitely one of those nations that give out an exotic feel. There’s just something about a land covered in snow, yet filled with the most wondrous kinds of monuments, mansions and things to discover, that attracts the huge tourist population that Russia thrives on every year.

We can all name some of the most famous monuments in Russia, such as St. Peter’s Cathedral and the Kremlin in Moscow, as Russia is absolutely filled with the most awesome types of monuments and awesome sights to see. One such treasure that is mostly not thought about are the absolutely stunning villas in Russia.

One of the largely undiscovered treasures of the cold Motherland is its famous villas in Russia, beautiful, majestic villas, the likes of which are truly rare. These villas, complete with patios, game rooms, and unmatched art, are guaranteed to be some of the very best you’ve seen!

Image Source
This mansion is by far one of the oldest buildings in the whole of the reputed city of Saint Petersburg and is one of the best luxury villas in Russia. While the building itself was commissioned in 1714 by one of the then Tzar’s mentors, it was still incomplete at the time of the mentor’s death in disgrace, four years later. While it was occupied in the past by many elite and high ranking orders, it was also the site of the first national library of Russia, based on one of the largest book collections in the world.

While certainly being not as well known as perhaps the Kikin Hall or other such mansions and villas of grave importance, the Kochubey Mansion still plays a very important part in the overall history of the glorious Motherland. It was built for the reputed Prince Mikhail Kochubey and completed in 1857. The house itself features an awesome Renaissance Revival style of architecture that never fails to amaze people.

Image Source
This is by far one of the most beautiful mansions in the entirety of this list. This mansion was built for Alexander Kelch, one of the richest men in the history of Russia, and certainly a very influential figure in the course of history. This mansion features not one style of architecture, but three different ones (resulting from the three architects who designed it) which serve to not only stand out as unique but to complement the rest.

Image Source
This is truly one of the exemplary pieces of architecture in the whole of Russia. Featuring the rare and excellent style of art nouveau to the the sunny, yet cold streets of Russia, the sheer enormity of this mansion combined with its contribution to history as the holiday villas in Russia of famous people such as the ballerina Mathilda Kschessinska, and even Tsar Nicholas II, makes this mansion one of the best in Russia.

Image Source
While this has a very humble sounding name, in reality, it is anything but. This mansion, located on Bolshaya Morskaya Ulitsa, is quite famous, as over the many years it has housed many of the most famous and reputed people in Russia, including one of the absolute legend novelists of the 20th century, Vladimir Nabokov, who spent the entirety of his childhood and adolescence in this magnificent mansion.

Image Source
This mansion is one of those that do not go for the bright, white style of outstanding architecture, but instead tries its best to portray its overall rustic-looking brown theme, managing to not only pull it off but making the mansion look absolutely majestic. The house of a previous Russian senator, this mansion is definitely one of the overall best looking in this list. Nowadays, it functions as a venue for different types of celebrations, as everything from weddings, tourist parties and corporate events are held in its hallowed halls.

7. The Mansion Of Baron Stieglitz

Image Source
This is one of the grandest mansions in the whole of Russia, as the sprawling compound of this mansion spreads over an unmatched area, with the rooms to match! This mansion features the Renaissance Revival style of architecture, and the outside of the mansion features one of the best harmonies among windows and carvings found in Russian architecture. Over the years, it has become one of the most famous villas in Russia, as it has been home to two of the most famous people, the first being the reputed and famous Grand Duke Pavel Alexandrovich, who was one of the most distinguished military officers of the late 18th and early 19th centuries, and Baron Alexander Stieglitz, one of the leading financiers of Russia.

Image Source
This is by far one of the most exotic mansions on this list. Although it is pretty dilapidated, this excellent art nouveau mansions remains one of the best examples of architecture. Featuring a unique style that is only found in Saint Petersburg and surrounding areas, this awesome mansion has one of the most elusive designs ever- the whole house is centered around staircases that twist and turn throughout the whole house, connecting the wings and rooms to each other!

This mansion has a rustic feel to it, a feel that is only accelerated by the awesome tiled roof and chimneys that lend an old feel to the mansion, presenting a picture that, when combined with the landscape, makes one of the best sights to see for miles (with a sunset to die for!). This awesome mansion does not stick to a single style, instead opting to combine the best aspects of various types of different architecture.

This is by far one of the most well-known Mansions in the whole of Russia. This opulent, majestic mansion combines a great location, the English Embankment, with awesome, unmatchable architecture with the last ingredient of a history-rich past to create one of the best villas in St. Petersburg, Russia. Not only being an elite aristocratic residence, but the Laval House was also a sort of meeting location for the elite of society. Designed by two of the most famous architects in Russia, the Laval House is well known throughout the land.

When thinking of Russia, one of the last things that one thinks of is the beautiful villas. However, after reading this list, one should come to comprehend that not all of the treasures the Motherland has to offer are the well-known ones: there are always new sights to see and a lot of new horizons to explore. Book your trip to Russia with TravelTriangle to experience the comfort and luxury of these best stays in the scenic land of Russia!