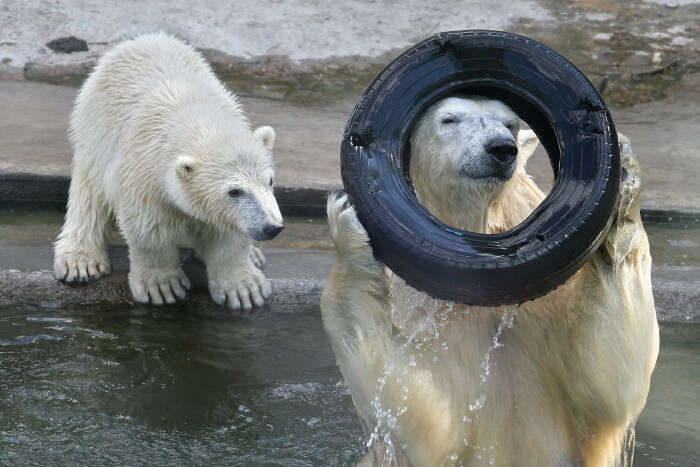 Greenland may be the least populated land by human beings in the world but the Scandinavian country does not fall short in providing shelter to the Arctic species. Whether it is a land-bound animal, a predator bird or the Arctic marine life, wildlife in Greenland is worth exploring. Despite the country being covered in snow, icebergs and glaciers for the most part of the year, wildlife in Greenland has learnt to thrive regardless of the harsh climatic conditions and the lack of vegetation.

9 Specimens Of Wildlife In Greenland

Visiting Greenland will bring one close to the rarest species of wildlife on this earth that are on their way to extinction. Here is a list of a few Arctic species that one might come across when visiting Greenland.

Whales are a common sight in Greenland, especially in the summer months. Greenland is home to more than 15 species of whales including the widely known Narwhal, bowhead and humpback species. Most of the other species are migratory and can be spotted only between May and July. There are a number of safari tours available along the Disko Bay that allows one to glide past the waters that are inhabited by the massive whale species. While poaching and hunting of these mammals are illegal, the Greenlanders are let off with a few rules to continue whaling as it is a part of their source of sustenance.

The pristine white bears of Greenland are a national symbol and the rarest of the bear species to be spotted alive. The Polar Bears are shy yet aggressive predators living off the northernmost coast of Greenland. If luck is by one’s side, the bears can be spotted near the populated towns of Greenland in summers when they drift down with the floating ice boulders. The bears are on a verge of extinction due to the increasing amount of organic pollutants that are let into the Ocean and global warming in general. Sight the best wildlife in Greenland before it takes the road to extinction.

Contrary to its exotic name, walruses are unattractive creatures that can be more precisely described as tusker seals. Walruses are huge and are often found on the shore beds or near the sea all along eastern Greenland. The tusks of walruses have the potential to grow up to a few metres long and are used for their defence. They are usually harmless but one has to be careful while kayaking in the sea as an encounter with the large-sized mammal might topple one over. They survive by feeding on small sea creatures such as molluscs and crustaceans.

The magical ride of Santa from the North pole actually resides in the northern part of Arctic Circle and can be witnessed in Greenland. Reindeer is also known as Caribou in most parts of the world and is unfortunately hunted for its antlers. One can spot reindeers in the regions of Paamiut and Uummannaq in the summers and autumn when there is sunshine. They are always found in herds and are quick to respond to the slightest of motion near them. They are one of the fastest animals in the region that can even give leopards a run for the money.

They are the largest animal species to survive in Greenland. They are huge furry goats that resemble a yak with horns. Each fully grown musk ox weighs around 500 kilograms and its fur is one of the most economically demanded part of the animal. They are found in herds all around Greenland and can easily be spotted wherever there are greener pastures. The accessories made out of its fur are expensive than the finest wool in the world and the meat of the ox is devoured as a delicacy in Greenland.

These small wile creatures are found all across Greenland especially in the tundra region. One can find 2 races of the Arctic fox species in the country. The most unique feature of this species is that they change their coat colours with the change in the season in Greenland. Make sure to spot this one when on wildlife tours in Greenland. They feed on small mammals such as crustaceans, mountain hares and lemmings.

Auk is the most commonly found seabird in Greenland. They are small and have a monochromatic body. They are known to breed in the coldest parts of the world and are always found is huge flocks. The Auk meat is the most sought-after dish in the country and can easily be found in any of the town kitchens. The Auk is then followed by Fulmars as the largest population of birds in Greenland. These petite birds make wildlife holidays in Greenland feel magical.

Greenland is known for this majestic predator bird gliding across the sky. The Eagles are not migratory and are known to breed even in the colder months of Greenland. Their main source of food in the unlimited option of small seabirds and oceanic fishes. Their distinctive chrome yellow beak and the whitetail makes it a view to be captured. They even feed on the common sea ducks and fowls in the coastal regions of the country.

Greenland has a lot of inland mammals in its lap. It has around six species of seals in its west coast and one can easily spot some when visiting the fjords. They weigh anywhere between 100 to 300 kilograms depending upon the type of species. They usually drift far off on the floating ice platforms in summers. They are one of the animals that can be easily spotted when on wildlife tours in Greenland. One has to look out for the harp seal, hooded or ring seals while kayaking across the sea. They are harmless and feed upon smaller sea mammals but are often hunted by whales and sharks.

It does seem like a dreamland going through the list of the wildlife in Greenland. However, these species of wildlife is worth visiting once in a lifetime before they are endangered by the growing concern of global warming and added affluents. Why think twice? Plan your trip to Greenland with TravelTriangle and let out the adventurous streak in you.