Best Landscapes In India: Surreal To The Core! 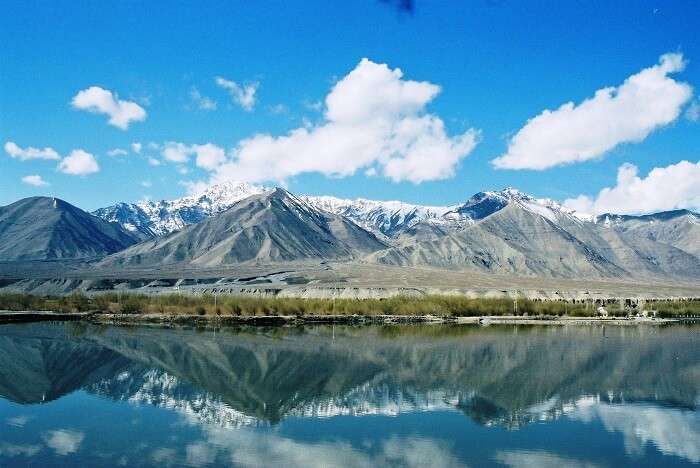 Divided into rocky terrains, lush forests, sprawling coastline, stunning desert, exotic islands and main highlands, the true magnificence of our country can be witnessed through these best landscapes in India.

From the Himalayan mountain ranges in the north to the Kanyakumari Coast in the south, customizable tour packages have enabled travelers to explore these breathtaking natural landscapes in India for a long time now. Take a look!

When talking about India, the very first thing that comes to mind is the diversity of the place. Along with cultural diversity the natural diversity here, too, is something that is awe-inspiring. From mountain ranges to sea coasts, deserts to plateaus, India has everything and here is proof. Just go on and read about some of the best landscapes India has to offer.

Much famed as an “abode of snow”, the Himalayan Mountain range offers the most incredible mountain landscapes in India. Stretching across the five major states of Jammu and Kashmir, Himachal Pradesh, Uttarakhand, Sikkim and the Seven Sisters of Northeast (Assam, Arunachal Pradesh, Nagaland, Manipur, Tripura, Meghalaya and Mizoram), Himalayan Mountain Ranges are nothing less than mighty and majestic. Himalayas landscapes in India are enthralling and mesmerisingly beautiful.

Things To Do Around Himalayan Mountain Range: Take a shikara ride in Dal Lake, take a car ride from Gulmarg to Kongdoori, motorbike ride to Ladakh and Magnetic Hill, paragliding in Bir Billing, trek to Triund via Mcleodganj, river rafting in Rishikesh, valley of flowers in Uttarakhand, drive through the Nathu La Pass in Sikkim, explore the centuries-old root bridge in Meghalaya, and more.

Located at the foothills of Himalayan mountain range, the Indo-Gangetic Plains or the Northern plains too stands out when it comes to the most beautiful landscapes in India. Covering the most of Uttarakhand, Bhutan, West Bengal, and Assam, the Northern Plains are divided into three regions of the Punjab Plain, the Ganga Plain, and the Brahmaputra Valley. These regions are further classified into four major belts based on the types of its terrains that are as follows:

Suggested Read: Places To Visit In India In April: Beat The Heat This Summer Like A Pro!

Remember studying about plateaus in geography classes? Well turns out that Central Highlands offers the most vivid landscapes in India and also covers the largest area when compared to other landscapes. Divided into the famous Malwa Plateau, the Deccan Plateau, and the Chota Nagpur Plateau, Central Highlands stretch across Rajasthan, Madhya Pradesh, Andhra Pradesh, Maharashtra, Karnataka, Jharkhand, Odisha, West Bengal, Bihar, and Chhattisgarh. That’s a lot!

Things To Do Around Central Highlands: Adore the architectural marvel of Gwalior Fort, visit the royal palaces in Jaipur, take a boat ride at Lake Pichola in Udaipur, witness mesmerizing sunrise at Wilson Point and visit the highest point of Pratapgad at Mahabaleshwar, backpack to Irshalgad in Matheran, explore the Deolo Hill in Kalimpong, and much more.

Suggested Read: 40 Tourist Places In Madhya Pradesh That You Should Be Visiting Right Now!

Spread across a vast region of 2,00,00 square kilometers, more than one-third of the Thar desert lies within the boundaries of India, and the rest in Pakistan. Popularly, known as the Great Indian Desert, it is rumored that the Thar Desert is anywhere between 4,000 to 10,000 years old. Its vastness is as big as the sky and covers a major part of Rajasthan and stretches to Punjab, Haryana, and Gujarat.

Things To Do In & Around Thar Desert: Explore the royal Umaid Bhawan Palace and Mehrangarh Fort in Jodhpur, enjoy camel safaris, parasailing, paramotoring, quad biking, and dune bashing in Jaisalmer, visit the Golden Temple and the Jallianwala Bagh at Amritsar, enjoy the best of paragliding and ziplining in Saputara, and more.

An impressive range of mountains that extend from West Bengal to Odisha, and pass from Andhra Pradesh to Tamil Nadu via some parts of Karnataka, are the massive Eastern Ghats that serve landscape photography very well. Located between the Bay of Bengal and the Deccan Plateau, Eastern Ghats attract a lot of travelers with their natural flora and fauna.

Things To Do Around Eastern Ghats: Trek to the Tiger Hills in Darjeeling and go wildlife watching in Sundarbans, visit the Araku Valley and explore Borra Caves in Vizag, stroll through the lush tea plantations, visit Pykara Lake, Botanical Garden, and Doddabetta peak in Ooty, take the Nilgiri Mountain Railway to Coonoor for scenic views, and much more.

Things To Do Around Western Ghats: Explore the nightlife of Mumbai, go caving at Karla and Bhaja caves in Lonavala, explore the best of nightlife and beaches in Goa, go for a long drive on the Pamban bridge in Rameswaram, gear up for the mighty Jog Falls and the lush Bandipur National Park, trek to Kudremukh, chill at Brahmagiri Hill in Munnar, visit the Iruppu Falls and Abbey Falls, and more.

Suggested Read: Dudhsagar Waterfall In Goa: A Startling Marvel Of The Western Ghats

The western coastline and eastern coastline combined together, offers enticing spots to witness the best landscapes in India. Stretching from Gujarat to Kerala in the west and from Tamil Nadu to West Bengal in the east, India’s stunning coastline passes through exotic destinations which are often sought by honeymooners.

Things To Do Around Coastal Plains: Start from the Rann of Kutch, explore the exquisite backwaters of Alleppey in a houseboat, explore one of the finest beaches in Kumarakom, visit the Solar observatory in Kodaikanal, explore the French colony in Pondicherry, witness awe-inspiring views of Indian Ocean from Vivekananda Rock Memorial in Kanyakumari, and much more.

Suggested Read: 54 Best Beaches In India Straight Out Of A Tropical Dream To Visit In 2022

The best landscapes in India are incomplete without its famous islands of Andaman & Nicobar, and Lakshadweep Islands. Located in Bay of Bengal, Andaman is an archipelago of more than 300 islands whereas Lakshadweep comprises of 36 atolls that are located in Laccadive Sea. Filled with lagoons, coral reefs, and a rich marine life, these islands are perfect for watersport enthusiasts and for honeymooners.

Things To Do In Andaman Islands: Snorkeling at the Elephant Beach, scuba diving, swimming with elephants, and parasailing in Havelock Island, glass bottom boat ride in North Bay Coral Island, banana boat ride in Port Blair, romantic walk on the white sands of Radhanagar Beach, and much more.

Things To Do In Lakshadweep Islands: Enjoy scuba diving in Kalpeni Island, canoeing in Minicoy Island, indulge in kite surfing in Kadmat Island, and witness the exciting tribal dance at Kalpeni Island.

Reminiscing about geography lessons already? Well if you’re done with the theory, gear up to explore these marvelous landscapes. If you are prompted and are already planning for a trip to some of the best landscapes in India then check out these customizable trip options and plan your India trip with TravelTriangle. Also, don’t forget to share your experiences with us at travelogues@traveltriangle.com.

Which is the best place in India?

The best place in India is arguably Jammu and Kashmir. It attracts many national and international tourists each year due to its natural beauty. It offers a wide range of traditional handicrafts, leather items, shawls, blankets, dry fruits, and saffron.

Which is the most beautiful state in India?

The most beautiful state in India is arguably Kerala. It is referred to as God’s own country owing to its natural beauty and charm. It is home to the most stunning beaches in India, like Varakala, Kovalam, and Muzhappilangad.

Which is the number one tourist place in India?

Manali, Himachal Pradesh’s renowned resort town, is the number one tourist place in India. It is known for snow-capped mountains and several avenues for adventure and entertainment. It is one of the best places for budget trips in India that can be covered on a shoestring budget.

Which state is richest in India?

The richest state in India is Maharashtra with a GDP of INR 27.96 lakh crores.

Which state is number one in education in India?

Kerala is number one in education in India with a literacy rate of 93.91% according to the 2011 census.

Which is the most dangerous state in India?

Uttar Pradesh is considered as the most dangerous state in India according to the National Crime Records Bureau. The highest number of violent crimes in 2012 were reported in Uttar Pradesh. They accounted for 12% of the country’s crime cases.

Which state food is best in India?

Rajasthani, South Indian and Kashmiri food is arguably considered as the best in India. South Indians follow the traditional and most unique way of eating. They eat on banana leaves! Isn’t that interesting?